In my new house, I have two outlets which are both fully switch, and can be controlled by two different switches (three way of course). I would like to convert the outlets both to half switched, but if both cannot be done, my wife and I could settle with one. The problem is, I'm a bit confused on the wiring. I'm not a wiring expert, and haven't seen a three way switch set up like this, nor can I find a diagram similar. Pictures of both switches and both outlets are below.

The wiring is as follows. Please note: I'm not 100% certain the order of each item in the circuit, so don't let my order in the list dictate the circuit.

Outlet 2: One 3-Wire, One 2-Wire. Black wires are connected, outlet has both whites, and the red alone on one side. All tabs are intact.

Switch 1: One 3-Wire, One 2-Wire. White wire from 2-wire is connected to black from 3-wire. Switch has Black from 2-wire, and both white and red from 3-wire

Can anyone help clear this up so we can make at least one outlet only half switched? Thanks so much!! 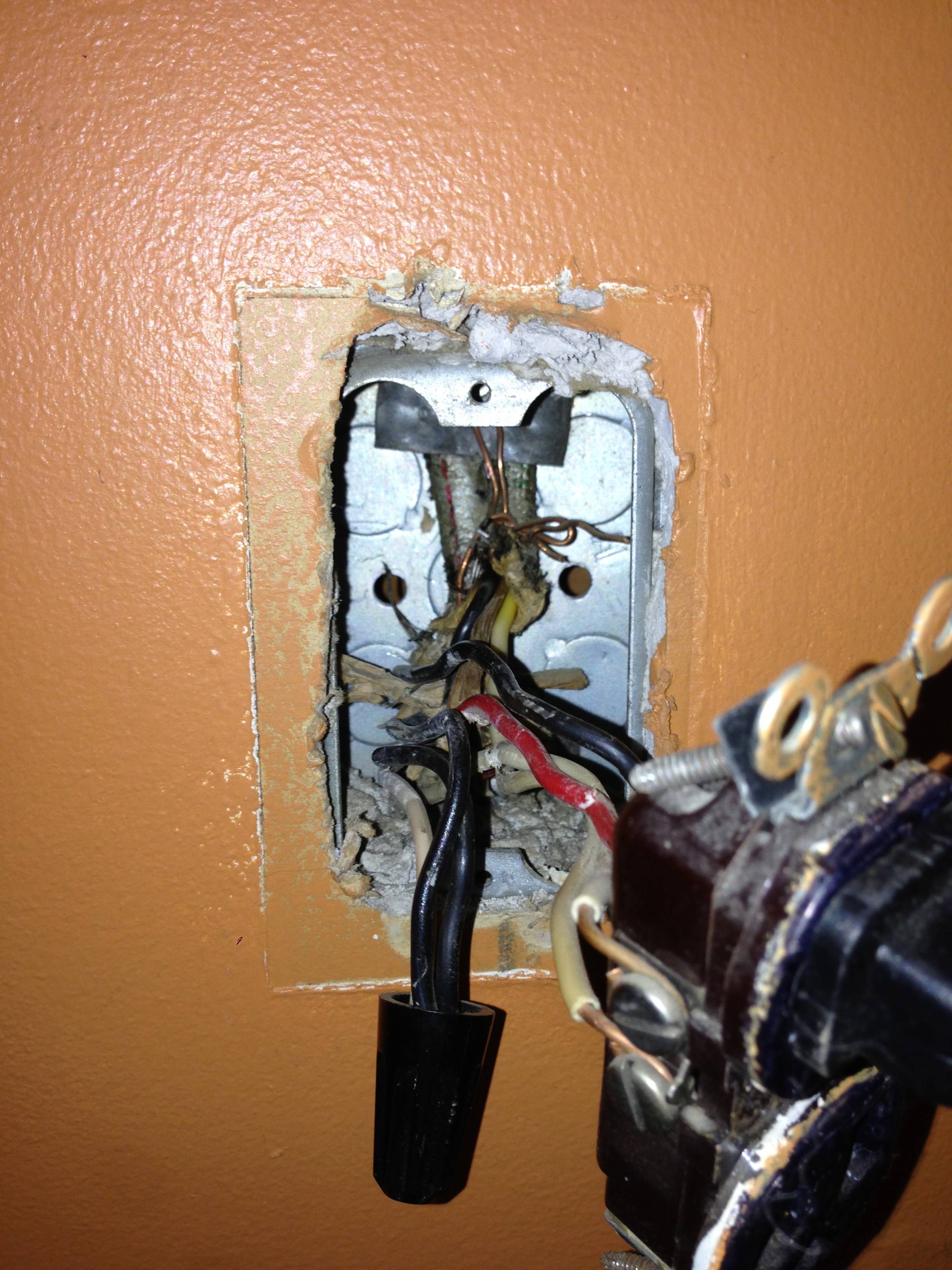 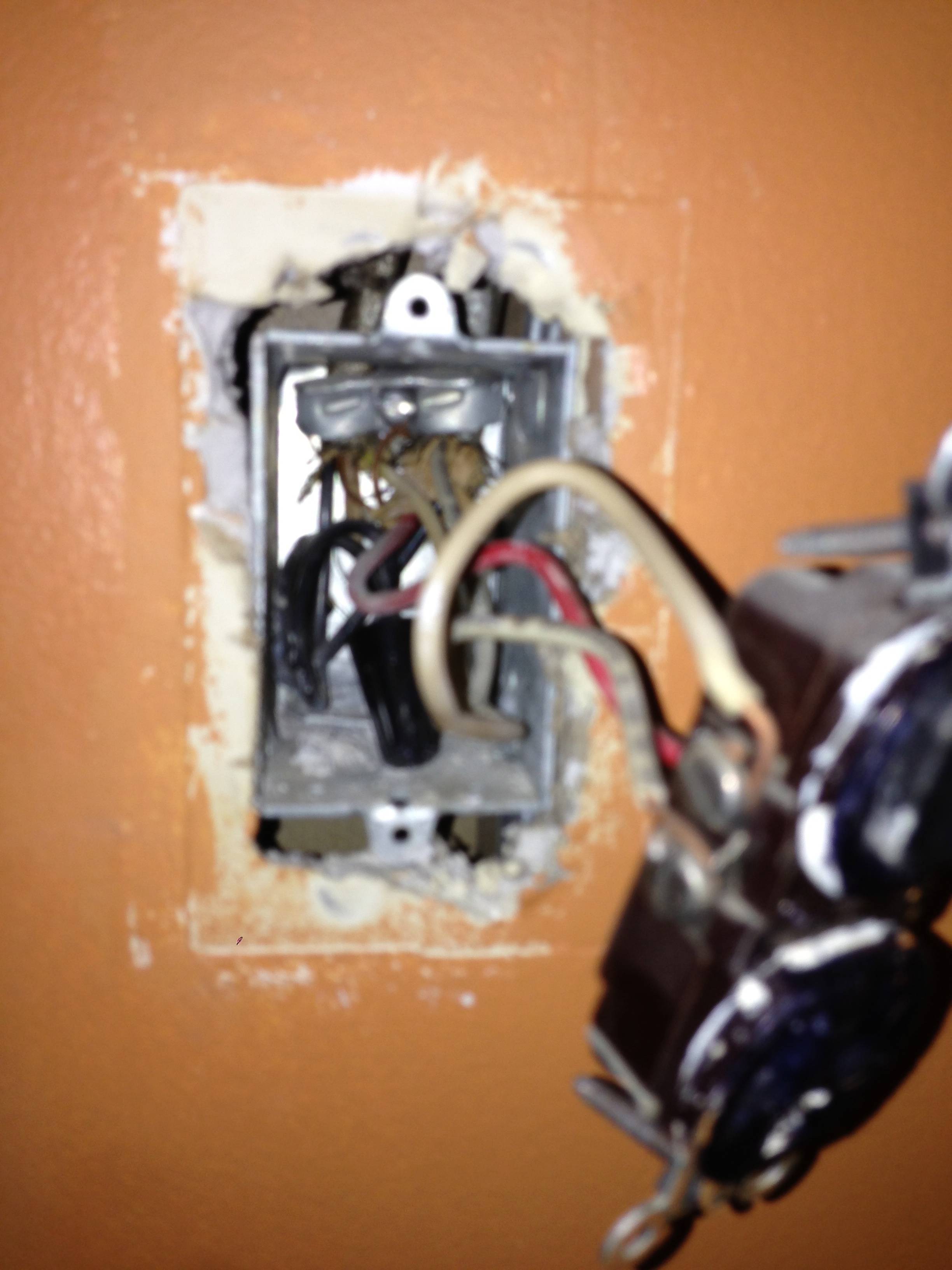 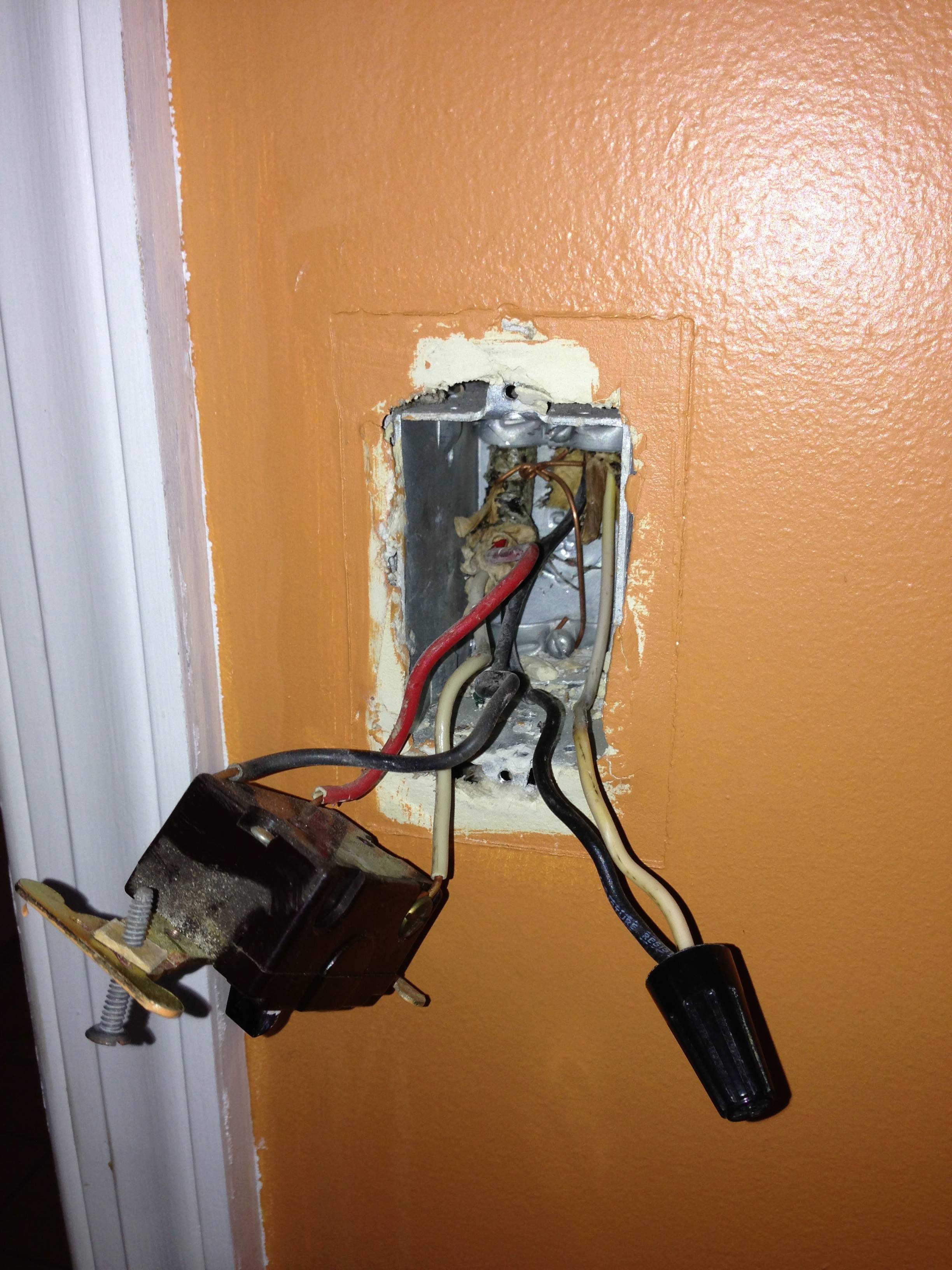 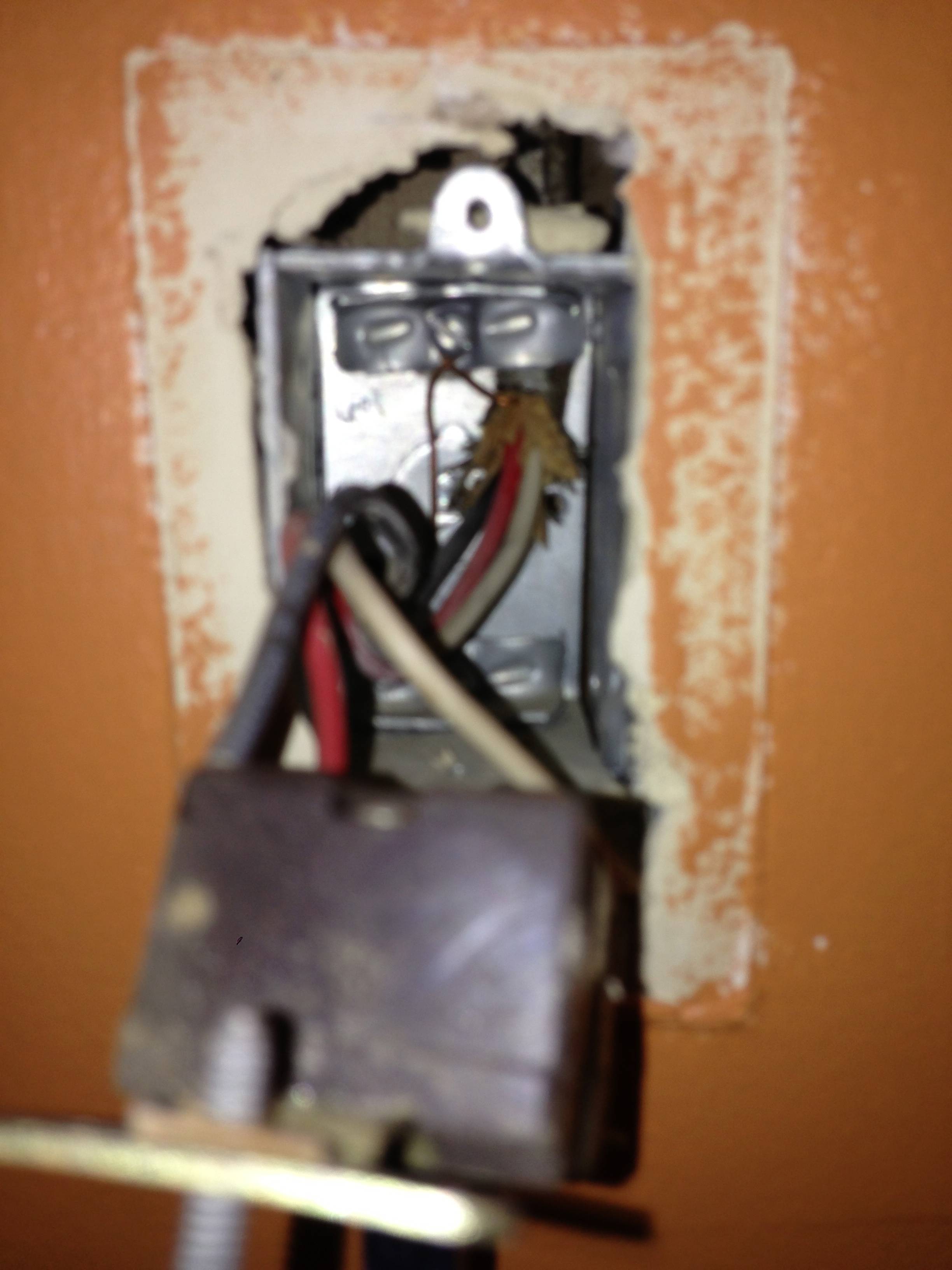 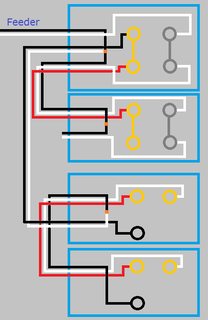 Start by turning the power off at the breaker, and verify power is off using a non-contact voltage tester.

When you look at the side of the receptacles, you'll see a small tab between the screw terminals. 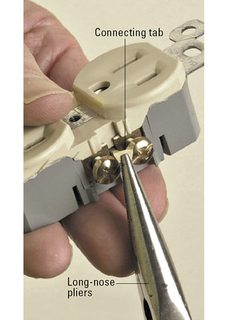 Using a pair of pliers, break the tab off of the ungrounded (hot) side of the receptacles (the brass screw terminals side). 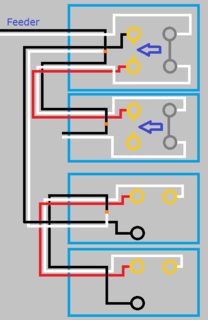 If you left it like this the top half of the first receptacle would work with the switch, but the bottom half and the second switch would never have power. Using a small bit of black wire and a twist-on wire connector, remove the red wire from the screw terminal and connect it to the black wire and the top screw terminal. So your circuit looks like this. 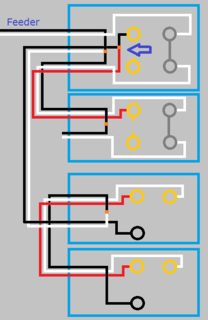 With the circuit like this the top half of both receptacles will be controlled by the switch, but the bottom will never be powered. To make the bottom half of the receptacles work, you'll have to use a bit of black wire to connect constant power to the lower screw terminal of each receptacle. When you're done, your circuit will look like this. 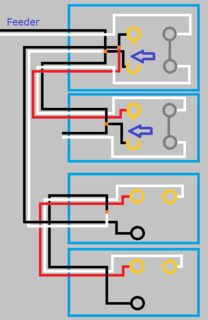 Finish up by remounting all devices, installing trim plates, and turning the circuit breaker back on. At this point the bottom half of the receptacles should always have power, and the top should be controlled by the switches.

If at any time during this project you feel uncomfortable, do not hesitate to contact a local licensed Electrician.

I'm just a guy on the internet, not a licensed Electrician. Assumptions may have been made on the current wiring, based on your descriptions. Without being there, there is no way to be sure these assumptions are correct. Please proceed with caution, and at your own risk.

The feed could be coming from either outlet, but no way to know which based on what you have provided. There appears to be additional outlets on this circuit.

Easy answer -- The two blacks tied together in Outlet #2 are always live. As are the two black and a white in outlet #1. You should confirm this with a tester .(I assume you know what you are doing -- all appropriate warnings when working with a live circuit) (actually, I question your safety awareness since it appears you left a lamp plugged in when taking the outlet apart for the photos. But, don't do this if you are unsure or if it is illegal in your jurisdiction.)

Long answer -- Sorry for the delay, stuff came up and no time to add a diagram. If anyone really wants one I will tomorrow.

OK, long answer without the diagram --

It's clear that the feed is not coming into S1 since if it was, then the 3-wire coming out of S1 would have to go to an outlet, but for both outlets the white and red from the 3-wire are connected to the outlet. This means that S1 Is connected straight to S2 using the 3-wire, and the 2-wire comes from the circuit, containing a feed and returning a switched feed.

This corresponds to the 2-wire in S1 where a white is connected to two blacks, and the black goes to the outlet. Clearly the Black is the switched feed coming from the switches, and the white is the feed going to the switches. Now we know where the feed is, and you can use that as needed. For the other two 2-wire cables, (one in S1, one in S2,) one goes to the distribution panel, and the other provides unswitched power to additional devices, probably outlets. We can not tell which since they are connected directly and either way would work.

The general rule about finding the feed with a tester will apply even if you don't bother opening up all the boxes to try and figure out the circuit. If you open an outlet and want to see if it has an unswitched feed line in there just test it.

To test, just carefully loosen the wire nut and without letting the wires touch anything else, apply the tester to the exposed wire and neutral. THIS IS DANGEROUS, AND SHOULD ONLY BE DONE BY PROFESSIONALS. NEVER TOUCH THE EXPOSED WIRE, AND DO NOT LET THE EXPOSED WIRE TOUCH ANYTHING EXCEPT THE TESTER OR IT WILL ARC. I usually also test against ground in older houses where the wiring may not be code compliant. Then flip a switch, and test again. then flip the other switch and test again. flip the first switch one more time and test giving you all four permutation just to be sure. The first three test are needed to know if you are on a "traveler" which is one of the the lines connecting the switches and is not usable. The last test is just because I like symmetry.

When you have a feed line in the box, the only other thing is to make sure the neutral is OK. I have seen crazy stuff in older houses so you just can't assume anything. In your case, the neutral in both boxes are appear in order so just split the outlet on the hot side, and leave the jumper intact on the neutral side. Then connect the feed to the bottom, and the switched feed to the top -- This is the convention.

Making the connections is straightforward, but do not do it if you are not trained. There are plenty ways to screw it up, and one screw up could cause personal injury or fire. The personal injury could be to someone using an appliance plugged into the outlet months from now so don't fake it and then think it is all OK. I have personally seen screw ups that cause shocks and could be life threatening when an amateur thinks they can fake it.

Since you are in the box, I would check that the plugs are up to date three wire plugs, and that the bonding is up to code. (The bonding looks iffy in the photos, but hard to tell.) Replacing the plugs is straightforward if necessary, as is cleaning up the bonding. I won't go into detail here, as I am sure that info is easy to find on the web.

Finally, test the circuit with a tester and NOTHING plugged in. test both sides of the outlet and test all three (Neutral, feed, switched feed) against ground. Then make sure the switches work. This is a lot of testing, but necessary when working blind on an old house.

3
How can I rewire half switched receptacles?
0
How to Rewire Powered Switch Controlling Half Hot Switched Outlet to Power Outlet as Always On and Control/Power Recessed Lighting
1
Switched outlet keeps tripping breaker
1
Correct way to rewire for a ceiling fan + light from a switched outlet
2
Wall of 2 switched outlets not working
1
Half switched outlet, has both whites connected
5
3-way switches no longer serving their purpose
1
Can I convert a 3-way switch that switches half duplex outlets into an outlet?
1
Convert switched nightlight+outlet to non-switched outlet
2
How can I stop 2 outlets being controlled by a switch?