Adding a mechanical part to a lock insert

After some cases of vandalism (objects inserted in the lock from outside) I would like to get rid of this single point of failure by adding, on the internal side of the lock, an electro-mechanical mechanism to turn the lock from the inside. It would be powered by an Arduino.

I know that there are electronic locks (the ones I saw had various issues) or anti-vandalism ones (no electronic parts) but I would like to try to roll out my own. 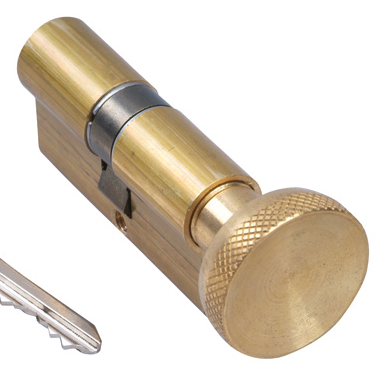 where I could attach something (a motor for instance) instead of the knob.

Do such inserts (cylinders) exist?

The "knob" cylinder shown in your picture is probably as close to ideal as you are going to get. Just modify the knob so you can attach your motor, directly or via drive belt or whatever.

It sounds like a better solution would be to either install a guard over the keyway so the kids can't tamper with it, or to switch to a keyless system so the problem can't varied in the first place.

I presume the apartment does not have a second door so you can't just go around that way.

1
Why can I no longer turn the knob of my self-locking door from the inside?
1
Re-key a lock so it's always openable without a key
1
Finding replacement for antediluvian lock
1
Is it easy to convert a cylindrical to mortise lock, or should I just install a deadbolt?
5
How can I open the latch mechanism on a Schlage keyed entry lock without the doorknob?
6
How to “lock” a bathroom door without drilling or spending too much money?