What's the best way to keep insects from coming in Jalousie windows?

My house has an attached sunroom with old Jalousie windows. They're great for a breeze, but I'd like to find a way to keep insects from coming through.

What are my options (other than replacing them)? Is it possible to attach screening to them, for example?

I've contacted several places that make windows and screens, and no one seems to know how to make screens for these windows. It sounds like no one has ever asked them before.

If you want to install a screen on the outside then you would (probably) need to build a frame around the window, with enough depth so that the window will not touch the outside screen. Also, you will probably need to weather-proof an exterior frame (like with flashing), depending on the depth and overhang of the eve.

Installing a screen on the inside may be easier, but ease of screen removal and durability with respect to repetetive screen removal (like for cleaning dead bugs) should be considered in the design.

A screen mesh curtain is what my mother-in-law uses on her windows. It is fairly inexpensive and very easy to remove for cleaning. 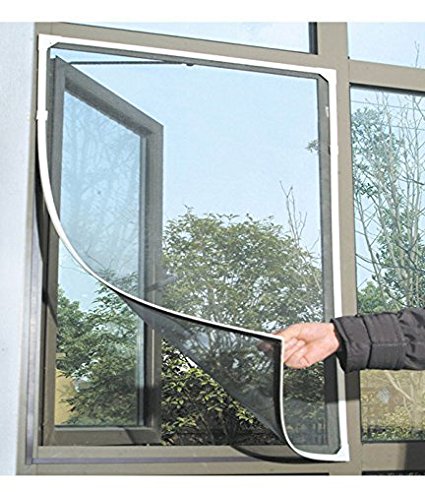 Not the answer you're looking for? Browse other questions tagged windows screens insect or ask your own question.

0
Is it possible to replace original vinyl windows with retrofits?
0
How do I remove/replace these window screens?
0
Replacing Window Screens?
1
What's the best method of insulating windows against solar heat?
1
How to restore/replace an old wood window without losing daylight opening
1
Please help to find grille clips
1
How to Apply Decorative Exterior Trim When Trim Width Exceeds Side Casing
1
Can these windows be shuttered from light in a simple and efficient way?