How can I get rid of gnats and other flies all over my house?

We just moved to a new place and we're noticing that there is a lot of gnats and fruit fly type bugs all over the house! We've been killing 2 or 3 an hour and they keep coming back. We find them all over, not just in the kitchen.

Is there any tips, tricks, products to get rid of the pests? I have a pregnant wife in the house, so harsh chemicals are a last result.

So... we just found the source of the flies... I got home from work to fine a Haz-mat team cleaning out one of the townhomes we share a wall with. Apparently the guy is a hoarder and had been hoarding things like empty whisky bottles and pizza boxes. The team had found human waste on the walls and rotten food throughout the house. The flies that were living there were so bad that the neighbor below him called the police about it. We only shared some pluming lines with him, they shared an air vent. SO GROSS!!!

There are plenty of recommendations out there on the web, but I can't say how well they work. I think the lifespan of a gnat is something along the lines of 15 days, so you basically just have to remove their food source, and they'll be gone in 2 weeks.

Clean dishes quickly, keep everything clean, get rid of potted plants (they feed on the manure found in many types of soil that you might get for potted plants) or cover the top layer of soil with an inch of sand to prevent them from getting to the manure, look for any dead animal bodies (rats, lizards, birds, etc.)

I've also seen ideas for traps, which supposedly work pretty well, but just because you catch some, that doesn't necessarily mean that you'll get rid of their breeding grounds. The basic idea is that you take a cup and put 1" of vinegar and one drop of dish soap in it, then cover it with something that resembles a funnel (curl up a piece of paper into a cone shape and cut the tip off.) They'll be able to fly in because the funnel will guide them downward, but they won't be able to get out so long as you seal between the lip of the glass and the funnel (maybe fold it back down on the outside of the glass and secure it with rubber bands. Like this: 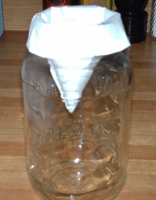 We have a small fruit fly problem in August each year. We deal with it using a paper cone trap as described by @Michael (see my comment), keeping the lid on the compost pail and emptying it often, and making sure overripe or bruised fruit doesn't sit rotting in the fruit bowl indefinitely. But one year it was awful, really really bad, and I did some searches and learned that they often grow in a slimy biofilm in a drain. I checked all the sinks and sure enough one of them (A guest bathroom near the kitchen) had a nasty slime growing in it. I used hot water and a bottle brush to scrub it all away. The fruit fly problem went back to normal almost immediately. So check your drains and get a bottle brush. It takes only minutes to clear the film, and then you go from unbearable to "yeah, sometimes at this time of year there are fruit flies" which is just part of life.

user13687user13687
1
Add a comment  |
Highly active question. Earn 10 reputation (not counting the association bonus) in order to answer this question. The reputation requirement helps protect this question from spam and non-answer activity.