I am troubleshooting some electrical issues on three different ceiling fans in my upstairs bedrooms. All three are wireless Harbor Breeze ceiling fans. They all have the same issues but at varying levels. issues include:

dimness
fan run slower than it should
flickering

I measured the house power and I get 118-120v on all three boxes. So I then measured the voltage from the light output(blue wire) on each unit. the readings are as follows:

All of the wire nuts are tight and they are wired correctly. I have the same ceiling fan in my living room and it doesnt have any issues. I measure the light output on it and it reads 110v which I would expect to be normal.

What would cause this issue with three or four different voltage readings? I cant imagine that I would have three defective ceiling fans. With the house voltage reading normal could there still be an issue else where in the circuit? The last two fans are on the same breaker, but the first one is on its own.

Here is an example of the ceiling fan wiring: 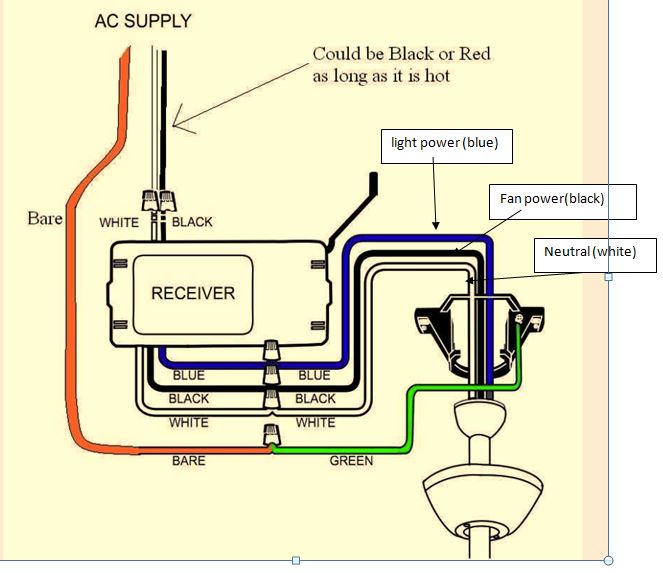 Your problems could be with the remote control receiver unit. These have power control circuitry inside that allows for on/off control of the fan and light and possibly speed control for the fan and dimming for the light. As with any electronic circuitry connected to the power line these can be damaged by a surge or serious spike on the power line.

One common cause of spikes and surges in some areas is thunder storms with accompanying lightening. You may want to look into swapping out one of these receiver units with a new one to see if it corrects the problem.

Note that this type of unit is permanently connected to the AC mains exposing it to storm surges all the time. In some instances the fan/light fixture may be wired up through a switch to shut it off. In cases where the switch is off during a storm it could account why some units escaped damage whilst others have failed.

Not the answer you're looking for? Browse other questions tagged ceiling-fan low-voltage or ask your own question.

2
How do I install a wireless remote for a ceiling light without a fan?
9
Do any ultra quiet ceiling fans that have no motor hum exist?
1
What could cause my ceiling fan light to go off after 2 seconds of being on?
1
Installed Ceiling Fan, Now Light Switch Not Working Properly
3
How can I control two ceiling fans and lights with one single pole switch?
0
Use Hampton Bay in wall ceiling fan remote with Harbor Breeze fan?
1
Ceiling Fan Install - detecting voltage in fixture
0
Ceiling Fan Not Spinning Normally, Replaced Capacitor Already
0
Low voltage in my light switch after relocating a ceiling box