How much weight can lagbolts hold, or how can I support this piece of slate on a wall?

The top will be held with another piece of 1x4 but I am not as concerned about it.

(EDIT TO ADD: three bolts because that is how many studs I have. they are about 16" on center) 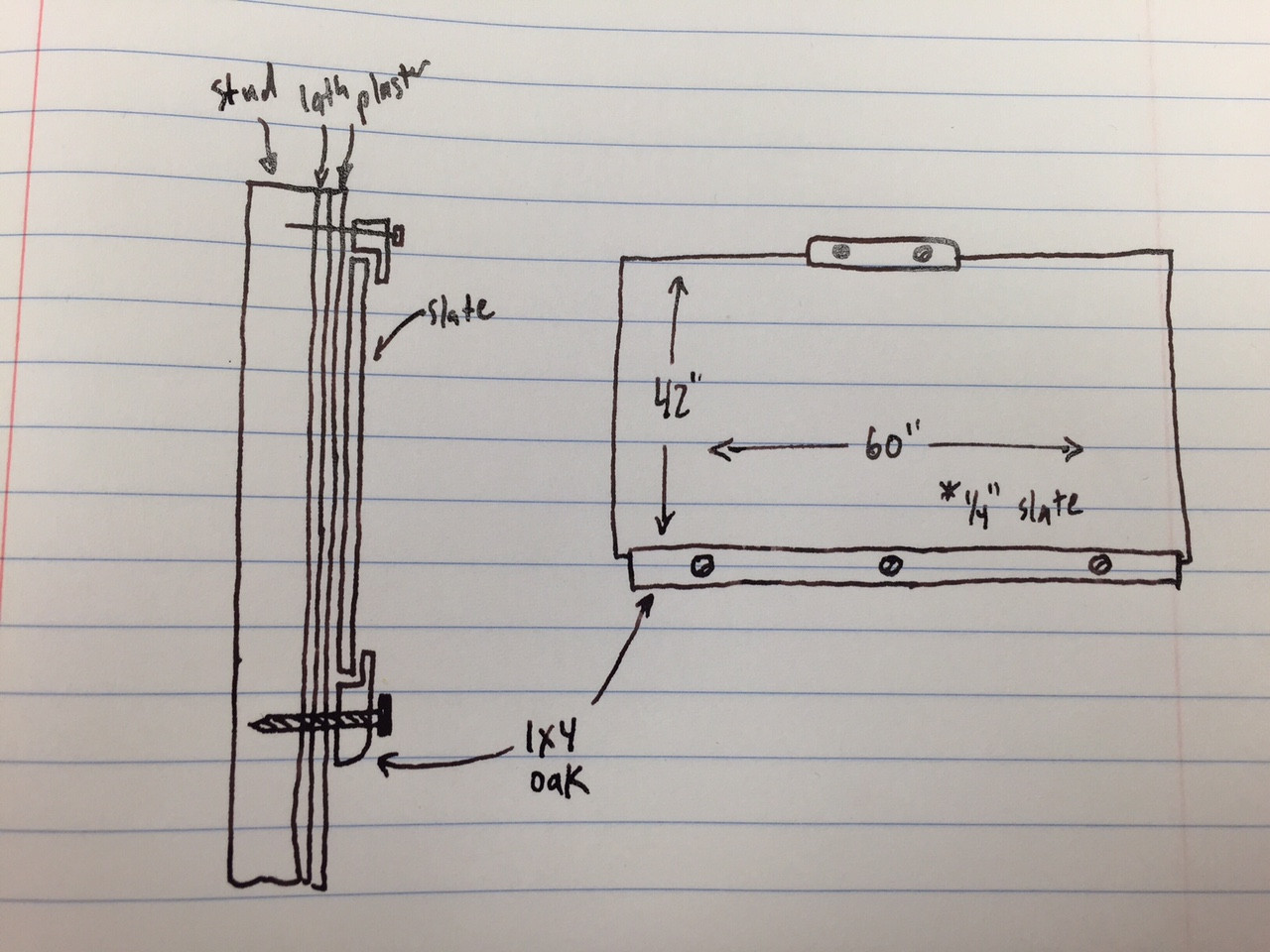 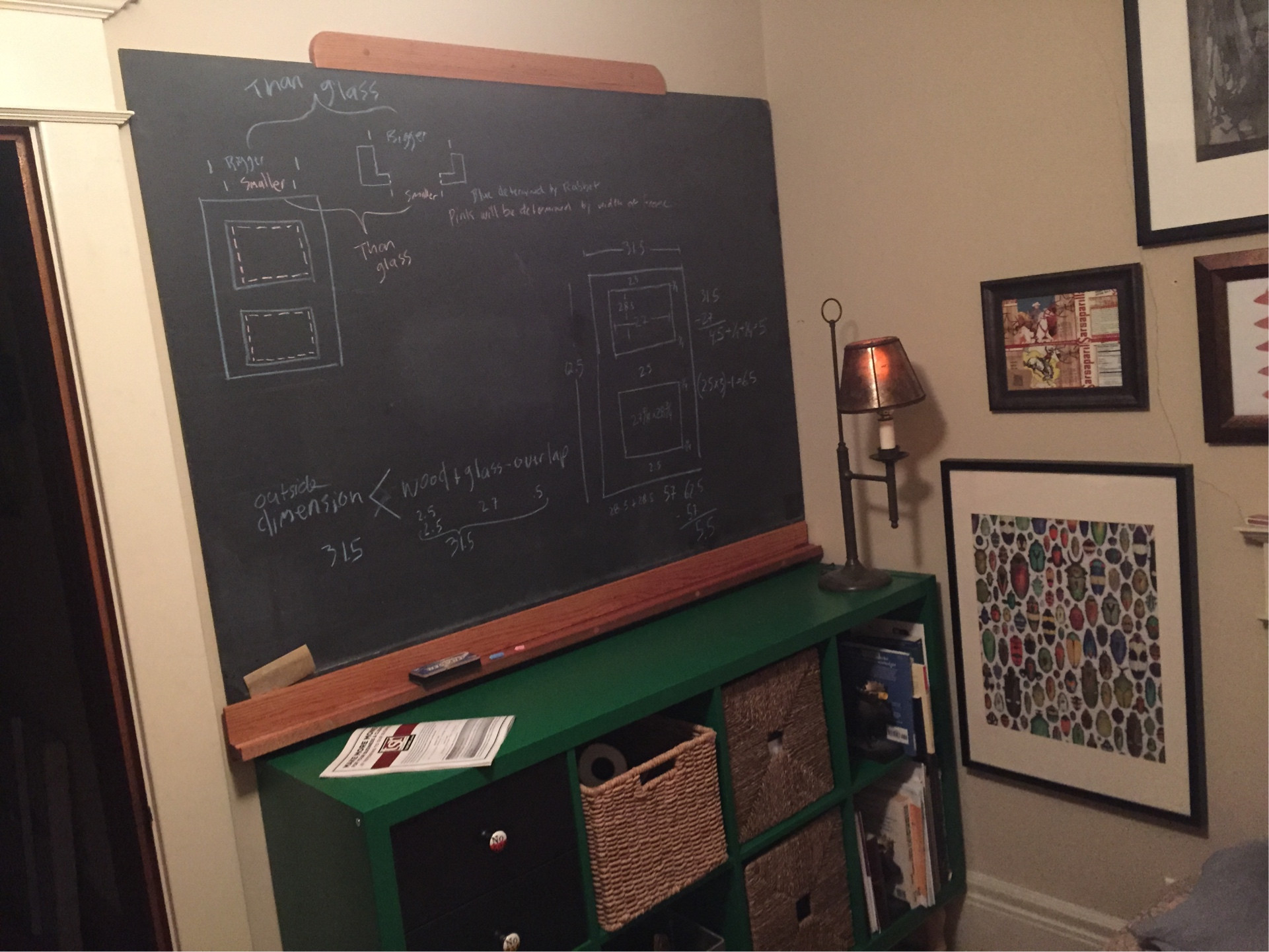 Shear strength of the hardware isn't going to be a real concern. A single 1/4" Grade 5 lag bolt, in a configuration like this, will fail at roughly 13,000 lbs. Even 1/8" lag screws (well down into "numbered" screw sizes) will have a shear strength of over 3,000 pounds. Your piece of slate, if its density and dimensions are fairly regular for the species of stone, will weigh about 65 lbs with the measurements you gave, so a single 1/4" bolt will withstand 200 times the load that you intend to apply across three of them.

What's more important is the cantilever load of the mount and the resulting force trying to rip the bolt straight out of the wood. As BrownRedHawk says, a typical rule of thumb for screw-in-stud mountings is about 300 pounds per bolt to rip the mount straight out of the studs. This isn't much of a concern with your design either, as the mount will hold the slate flush to the wall and so the amount of cantilever force is minimal. If you were trying to hold the slate out from the wall a certain distance, that would make the bottom corner of the mount into a lever arm applying the torque of the slate bearing down on the extended mount, which would be considerable at just a few inches of offset from the wall.

Just use graded hardware, so you know it'll stand up to a minimum load. Also, use screws, not nails, in the upper mount. The tear-out strength for a nail, even a helical-threaded one, is much, much lower than a screw, and short of a full tear-out load they're more likely to work themselves out over time. You're right, the yield strength of these screws are highly unlikely to be tested, but you might as well use the same hardware as for the lower mount for a uniform look.

I believe the tear-out strength will be less than the sheer strength of the bolt in this situation. That being said, I believe the dead load of the average 1/4" lag is roughly 400# tear-out in a stud. That assumes a few things (i.e. Good & solid stud, properly sized pilot hole, no faults or cracks in the plaster under the wood stripping allowing it to lever, etc).

If you're using 3, that would suggest a total of ~1200#. Since I have a feeling you might be using this as a chalkboard with some external forces, and since it's lathe and plaster I'll assume older construction, I'd err on the side of caution.

With just those 3 bolts, I'd personally stay under 300#, but you might try more.

I would use the 3 lag bolts in studs assuming no more can be located behind the area intended for use. I personally would opt for a bit of construction adhesive and/or some plaster/drywall anchors with fasteners in addition to help distribute the load evenly.

That would make me feel better with a slightly active, if not live load (if you're vigorously writing on the chalkboard).

Not the answer you're looking for? Browse other questions tagged walls hanging support fastener or ask your own question.

0
How much can hardware to manage for cantilever load & sheer weight on a built out faux beam that will support barn door bookcase?