I am attempting to add an additional outlet higher up in a wall for a wall mounted TV. There is an outlet below where I've mounted that I planned to run power from up to the location by the TV.

When I opened the existing outlet, I found there are already 3 sets of wires running into the box (so 3 white, 3 black, + grounds). All the tutorials/questions I've found have one, maybe two sets coming into the box

I don't know why there are so many wires in this box, or where they all go - The outlet is on the same circuit as a bathroom on the other side of the wall, which has a GFI outlet in it, then there is another outlet down the wall from this one that I think is connected.

I've got a couple of questions

1 - Is it ok to just attach my new black/white to the existing outlet on the open spots and pigtail the grounds?

2 - If not, how should I connect the new line? If I'm supposed to pigtail everything, I'm not sure how best to do that unless I need to connect 5 blacks and 5 whites (three existing coming into the box, plus 1 additional into box, plus 1 from pigtail to the outlet

3 - I read somewhere else here about box size, from what I'd seen it looks like with the new line in the box it'll be too full, so I'd need to replace the box... It's a new work attached to the stud box, just a single outlet. I don't want to double up the outlets, are there bigger old work boxes for a single outlet?

4 - I can live without the outlet at the bottom, so if it's too much hassle can I just pig tail all the blacks/whites/grounds inside this box and put a plate on it? 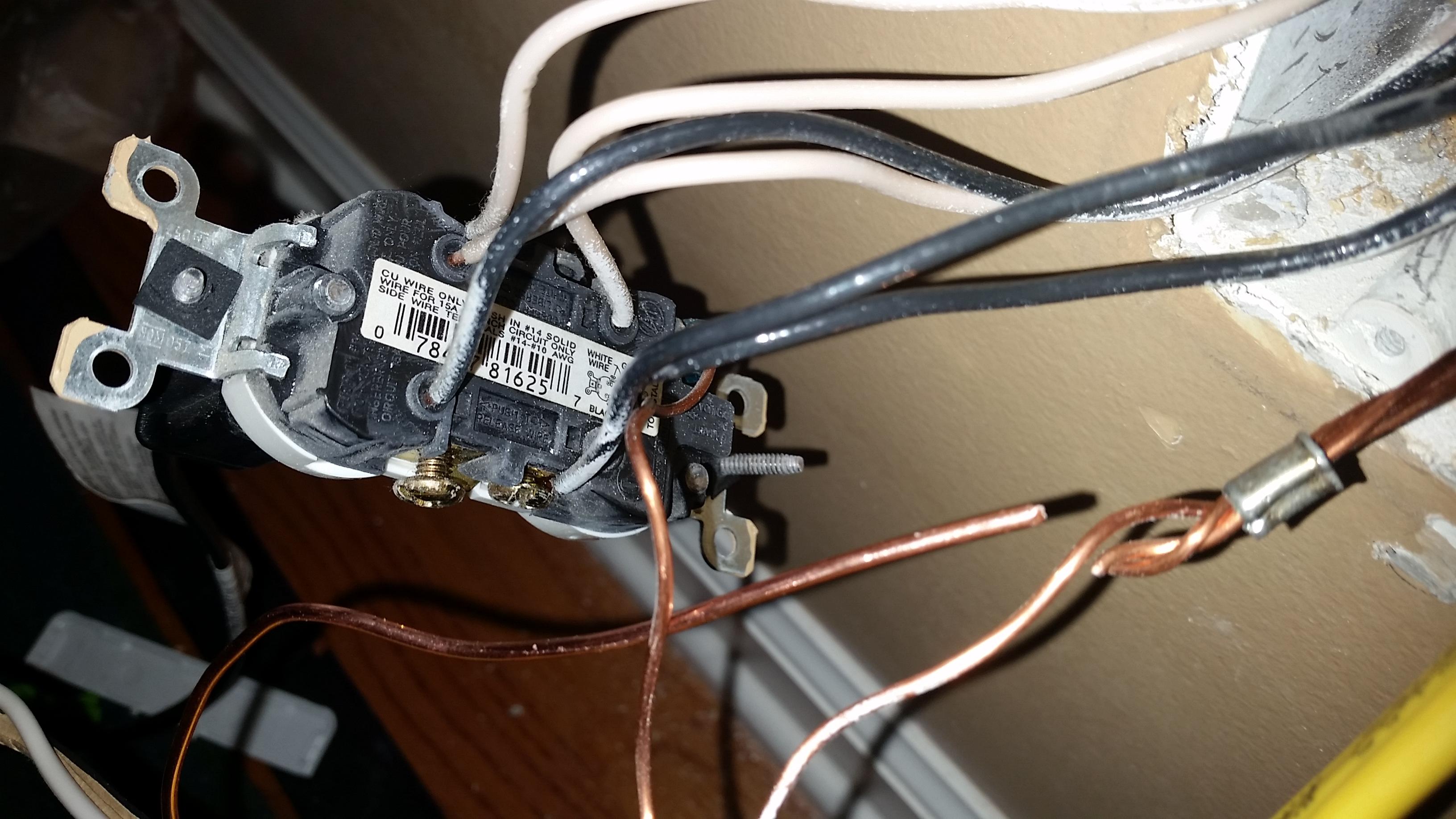 existing box: (three in the back were existing, yellow is the one I added) 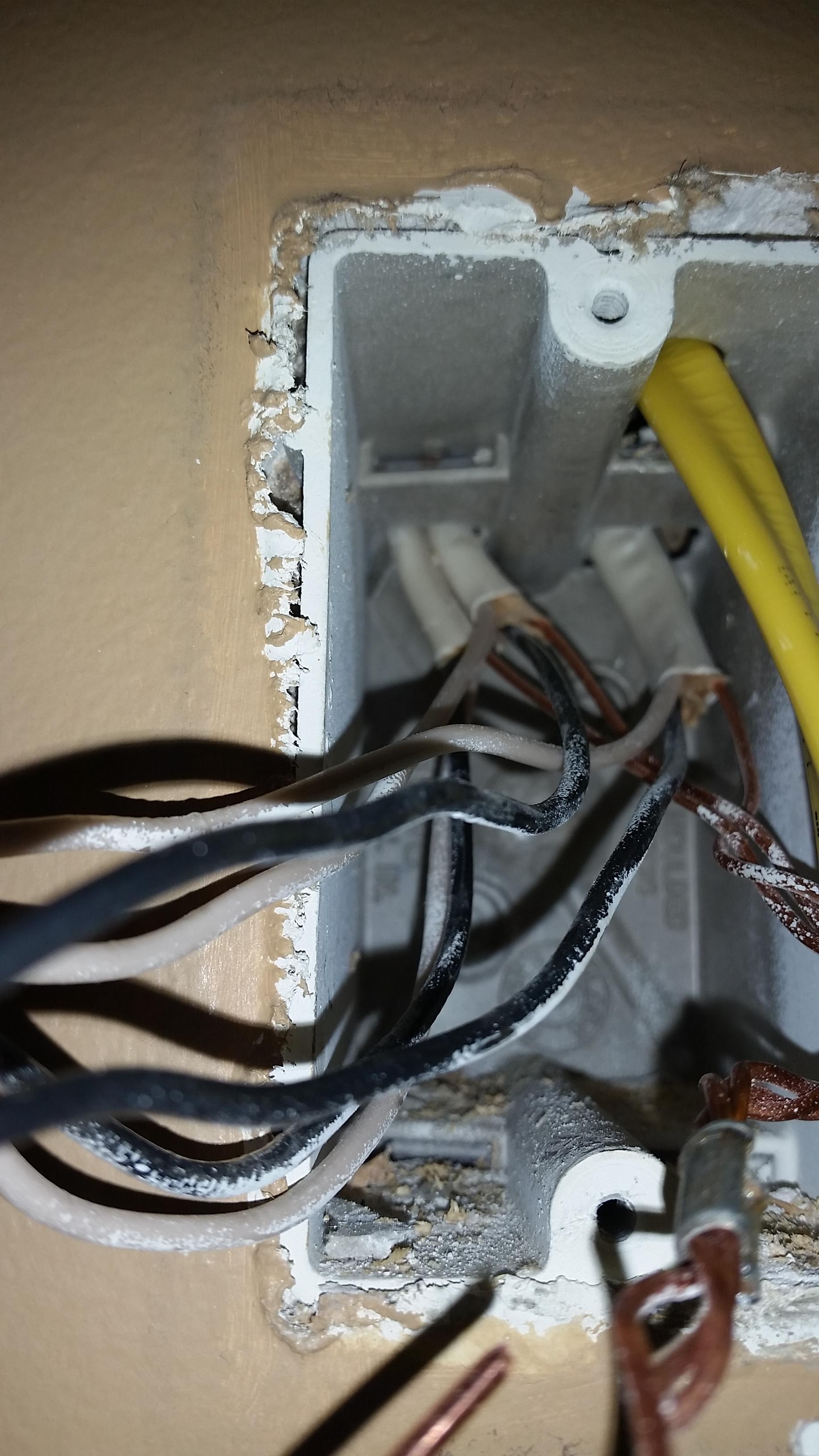 However, since you're using 12 AWG, the calculation looks like this...

For more information on box fill, check out this answer

As for connecting the new wire. There should be no problem attaching it to the receptacle. However, since you're using 12 AWG conductors, you'll have to use the screw terminals.

If you want to do pigtails, you can. I know some guys don't like the backstab connections, so if you want to avoid using them you can do pigtails. Ideal 76B® Red Wire-nut® Wire Connectors are rated for 2 to 5 #14 conductors, but check with the manufacturer of the connectors you're using. Again, if you're going to do this, you'll want to use #14 conductors instead of the #12 you've installed.

5
Is it okay to use both the backwire holes and the side terminals on an electrical outlet?
8
Wall Outlet with three sets of wires!
1
Removing switched outlet and 4 terminal outlet with 2 terminal outlet?
7
Outlet with 3 sets of wires
7
Adding an outlet above this metal box
2
Needing to add an outlet but confused why builder used 14-3 wire on a non-switched outlet
0
Replacing a wall outlet with three black and three white wires with a smart outlet with one white and one black wire
0
Adding an outlet to a three way switch circuit
1
Add a light fixture to a box that contains three cables (3 white and 3 black) 70 Year Old EGC