Does it make sense to build a false wall at the back of a shower bay and what do I need to concern myself with if doing this?

I tore apart my master bathroom down to the drywall/subfloor (studs in some places). It had a 35 year old 1 piece blue fiberglass surround in it (had to cut it up into many pieces to get it out the door).

My plan was to replace it with a newer 3 or 4 piece surround. However, I've run into a bit of a snag. 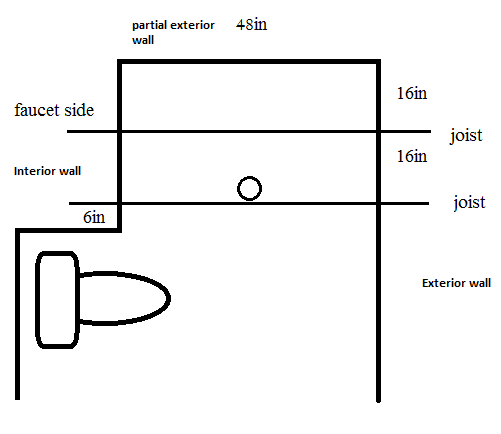 As you can see, the existing shower drain is centered along the front edge of the shower. I've come to realize that it was done this way because there is a joist running 16in from the back wall. Everything I've found in big box (HD/Lowes/Menards) have the shower drain 17in from the back wall (48x34 showers) either directly in the middle or centered front to back along the short sides. I could move the drain to just about anywhere EXCEPT along that line because there is a joist running right there.

Am I doomed to replace this with a custom shower pan? What other options do I have?

-edit- I just thought of a solution (as the title suggests) that I'd like to run past the masses here.

As you can see in the pics, I have ~5-6in at the front of the bay to work with. The alcove is 39in deep (not counting drywall width) and it appears the standard depth for 48in width showers is only 34in deep. If I were to frame out a false wall in the back of the shower bay that would essentially move the shower out an extra 3.5in and that should be enough to run my drain right along that joist...right? 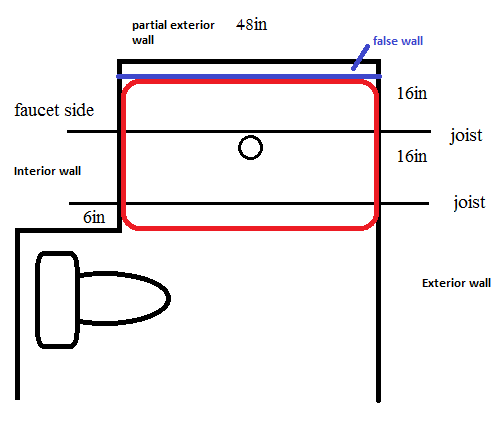 It can't be that easy right? What am I missing here?

Absolutely, why not? A simple stud wall would do. Just make sure that the wall is going to stand up to any possible water ingress by using concrete tile backer rather than any kind of plasterboard, taping the joints and sealing everything. To me, it seems like common sense to build your enclosure around the complexities of waste water pipe routing.

EDIT: I think what you refer to as drywall is what I refer to as plasterboard. Either way, you don't want it in a shower, unless you're doing to tank it.

Not the answer you're looking for?Browse other questions tagged shower or ask your own question.

2
How do I fix a twisted shower head?
2
How to fill crack in marble shower sill
1
Shower Plumbing or Concrete pan
1
Shower floor slope
2
How long and tall does a shower wall need to be to protect against overspray?
0
How should I finish a shower stall at an outside corner?
1
Tub to shower conversion plumbing questions
1
How can I bring more light into this shower?
0
Process of removing mold from behind shower tile