Can a locksmith open a deadbolt lock?

I wonder how secure my deadbolt lock is.

How difficult is it for a professional to open such a lock?

Any lock can be opened. The questions are:

Depending on the particular deadbolt, it will be somewhere between trivial and moderately difficult. At some point, anyone who wants to get in will just move to the windows or other weak points.

In general, a professional is going to be able to open anything you have, because that's what they do all day. The reality though is that with the exception of high security locks like Medeco, it doesn't even take a professional to open them. But you ask about a deadlock, so let me provide some background...

A deadbolt is more about resisting kicking open or using a credit card to slide in and raise the bolt. It's not so much about being harder to pick, as the lock mechanism in it is going to be extremely similar to a normal door handle lock.

The things that really matter in a normal (not a high-security lock) are how tight the tolerances are, and how many pins. For example, the 6 pin Kwikset Titans (aka UltraMax) are quite a bit harder to pick than the 5 pin regular Kwiksets, and a Schlage 5 pin is harder than a Kiwkset 5 pin. But they both are dramatically easier to pick than a Medeco which has additional features to make it much harder to pick.

However, bump keys can make most traditional locks quite easy to open. And anyone who has time and space to drill can get in to pretty much anything. And don't forget: putting a strong lock next to a window may just mean the window gets broken.

One thing you may want to consider is putting a high security lock on your house may advertise to thieves that you have something you particularly want to protect.

Absolutely. Anyone with a bump key or lockpick can open a deadbolt.

Bottom line is that if someone wants to get into your house .... they can. I've never seen a fool proof system. It's a matter of time and noise. A locksmith can make as much noise as they need to because they've been hired to get through a deadbolt, whereas a criminal wants to draw as little attention to themselves as possible.

Deadbolts are harder to open and they're rather noisy compared to a normal lock so a criminal would have to take alot more time attempting to get it open.

For myself, I feel very secure with my deadbolt system and don't worry about anyone picking the lock to get in.

A couple of tips for making it harder to pick a lock:

Beyond getting a better lock (higher quality, more pins, higher security design), these may be alternatives for slowing someone down.

Given that any lock just slows someone down, why not have a lobby with both the inside and the outside door locked. Put an alarm sensor in the lobber, but the control panel inside the 2nd door, this it is likely that the alarm will go off before the 2nd lock is picked.

(It is even more likely you will drop your keys on night and have the alarm go off before you can unlock the 2nd door!)

Funny Enough!...In most situations it would be much faster to break the lock (or at least force the gate open), rather than actually spending time picking the lock. This changes the times to seconds not minutes!.. I have made a very ugly example to illustrate. 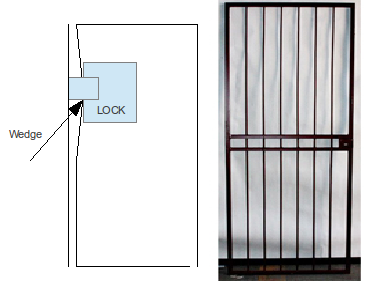 In many cases the frame of the gate is has enough torsion/flexibility, that applying a wedge between the outer frame and inner frame (ie the gap where the lock pin goes into the door frame) and opening the gap will simply "Jimmy" the lock open.

The Right hand picture shows a typical prevention of this where lateral support is added in to improve the lateral strength of the gate frame (provided the end opposite to the lock is butted against the other end of the frame.

It is all depending on the deadbolt that you have. If it is a standard lock they can usually just pick it or bump key it. But if it a security lock then the only way that they are able to open it is to drill the lock. Most of them will try everything before drilling because once they drill your lock, you would need to replace it.

2
what parameters should I look for when choosing an electric deadbolt?
8
How can I fit a Schlage lockset in my front door?
6
How can I secure a door with a window right next to it?
0
Multi point door lock security and can I use wood screws near it?
1
How can I secure windows which have been bypassed in my security system because they're open?
1
How can I adjust a door latch so that it engages securely?
2
Lock can be opened with credit card even when deadlatch is fully depressed
0
Is there a replacement mailbox lock that is more pry-resistant?