what parameters should I look for when choosing an electric deadbolt?

I am looking for electric deadbolts for external steel doors - to place several of them on a door - one on each side (top, bottom, left, right) for extra security.

I want to buy just the deadbolt which opens when electric current appears on the wire, the electronics which will apply to current when an authorized user is at the door will be designed separately.

I need the electric deadlocks to be secure enough to be the only locks on an external home door in a high burglary rate area. And on the other hand be highly reliable in the sense that it'll always open when applied current, because if it doesn't I'd have to sleep on the doorstep.

The lock should operate on DC (not mains AC power) - to be able to use battery backup.

What parameters which I should look for in such locks, and what kinds to avoid?

First off, I make no warranty of any of these suggestions. Especially if this is actually a bank...

I would be hesitant to completely rely on an all-electronic solution, since if there is a failure (which, frankly, is likely with a budget of only 200 per lock), you don't want to have to resort to a plasma torch or something to cut open (and destroy) the door to get in.

What seems like an interesting option to me though would be some of the RF-controlled keyless locks on the market. These look like a normal deadbolt, but have an RF remote. 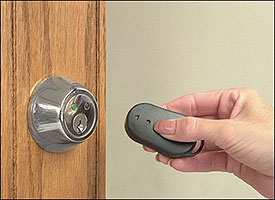 What would be needed in whatever is chosen is the ability to hook into it, specifically, you need two things:

Since these are keyed locks, you have a nice backup mechanism if everything fails: use the 4 keys to open the locks (and note, you'd need to be sure they're 4 separate keys).

Of course, since they're keyed locks, they're also susceptible to being picked/bumped. To try and combat that, what you can do is have your controller monitor each lock individually. If any of the locks ever open when the controller didn't tell them to, then it should trigger an immediate alarm (consider: someone is likely to pick/bump one at a time). If this is an exterior door, then this is your first line of defence, unfortunately. If it's an interior door, then you should also have motion and other door sensors that will hopefully trigger before someone gets to this door.

You also need to consider all other aspects of physical security. You're only as secure as the weakest point, so if someone can break through a window or wall or vent then it doesn't matter how good the door is. Physical security is also just a matter of time: eventually, you can get through anything. That's why I suggested having an alarm system connected, which is both a deterrent, and triggers a police/whatever response. Consider: safes, even high-end ones, are rated by the time it takes to crack them: your door will be no different. Having video cameras probably helps as well, both as a deterrent and to help catch people afterwards. Your video and security system also need to be protected, so that they can't just be disabled/destroyed.

On the other hand, too much security and you actually can attract attention. I've heard that the houses with extra locks, security cameras, etc, are often targeted by thieves since they look like they have something valuable worth protecting.

Not the answer you're looking for? Browse other questions tagged electrical doors security lock locks or ask your own question.

1
How can I adjust a door latch so that it engages securely?
3
Rekeying pattern for duplex with shared front door
1
Which kind of locks should be installed on external wooden glass panel doors?
0
Can I swap the tumblers in two locks from the same manufacturer?
5
Security door with lock guard
12
"key will unlock the door" vs "key will *open* the door, but not unlock"
1
What should I use to smooth out and finish gap in trim for deadbolt lock latch?
8
What to look for when trying to decide on an apartment door?