Installing a bathroom vent duct through a concrete roof

I recently bought a two-story condo unit. I decided to replace the bathroom exhaust fans upstairs, but when I removed the old fans, I discovered the exhaust duct was not connected to the roof vent: both ducts traveled all the way to the vent and joined at a tee, but there was a six-inch gap between tee and roof vent. Like this: 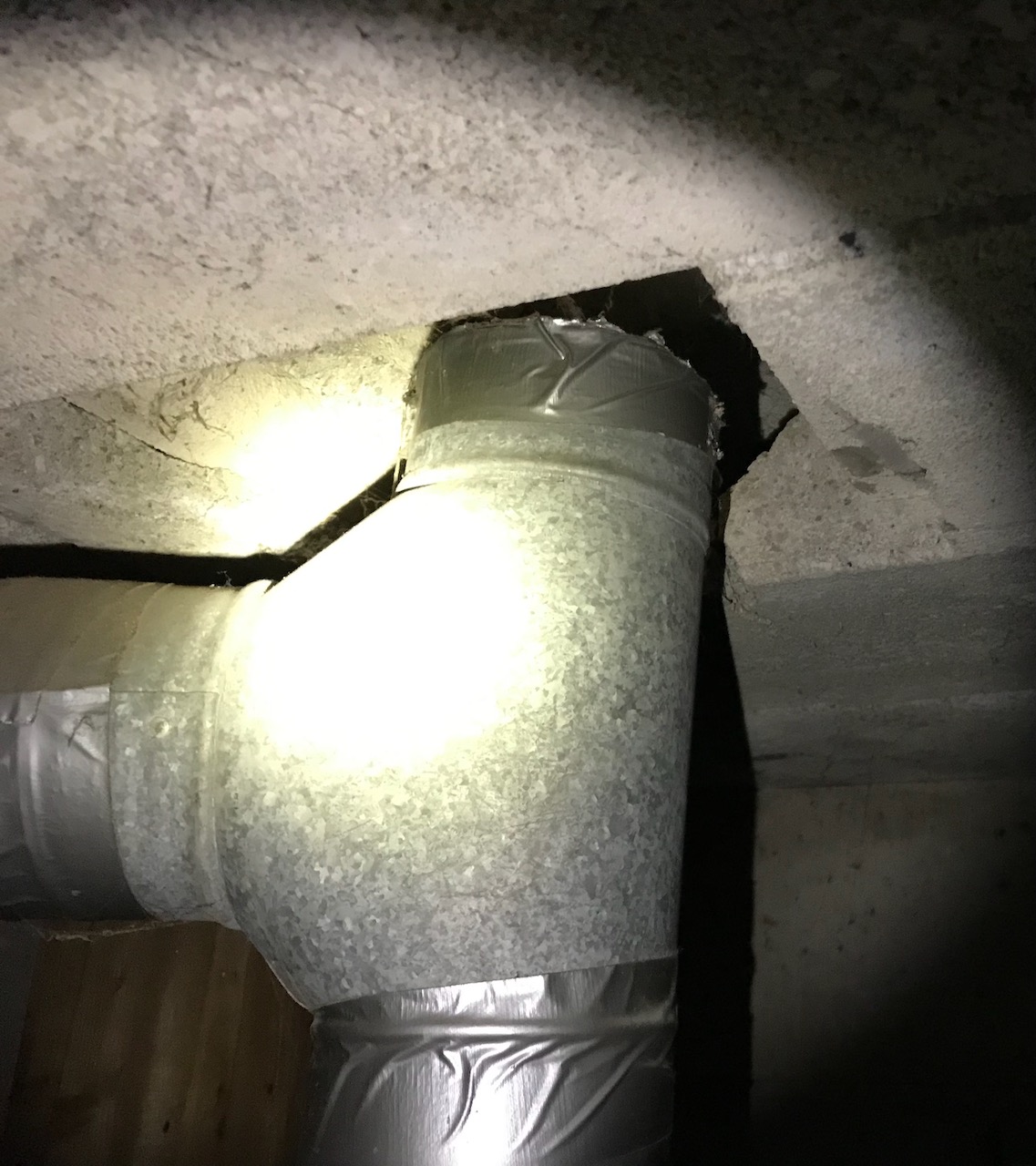 As you can see, it's a flat concrete roof (I think it's hollow-core slab), and the duct is 4" galvanized. An opening was cut into the concrete for the duct and vent. The duct tape on the tee makes me think it was attached to something before, but when I get my phone in to look straight up, I see this: 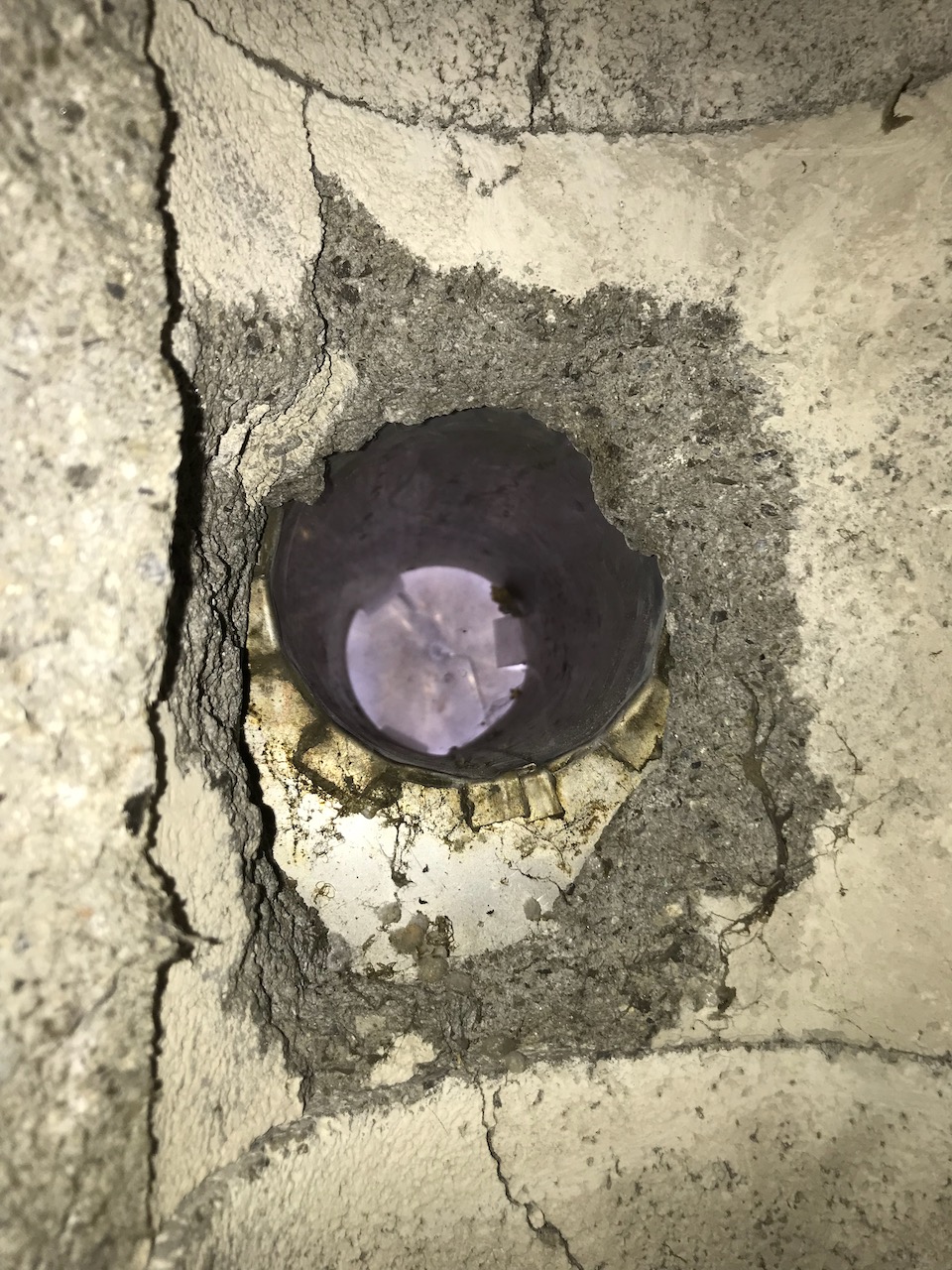 The roof vent is flush with the concrete, but off-center, so it is obstructed (only by about half an inch) on one side. It's unclear how the tee ever could have connected, and there's no sign of any missing pieces.

The question is: How do I attach a new exhaust duct to this vent?

I am accessing the space from a 7" by 7" hole in the bathroom wall, which is tiled: 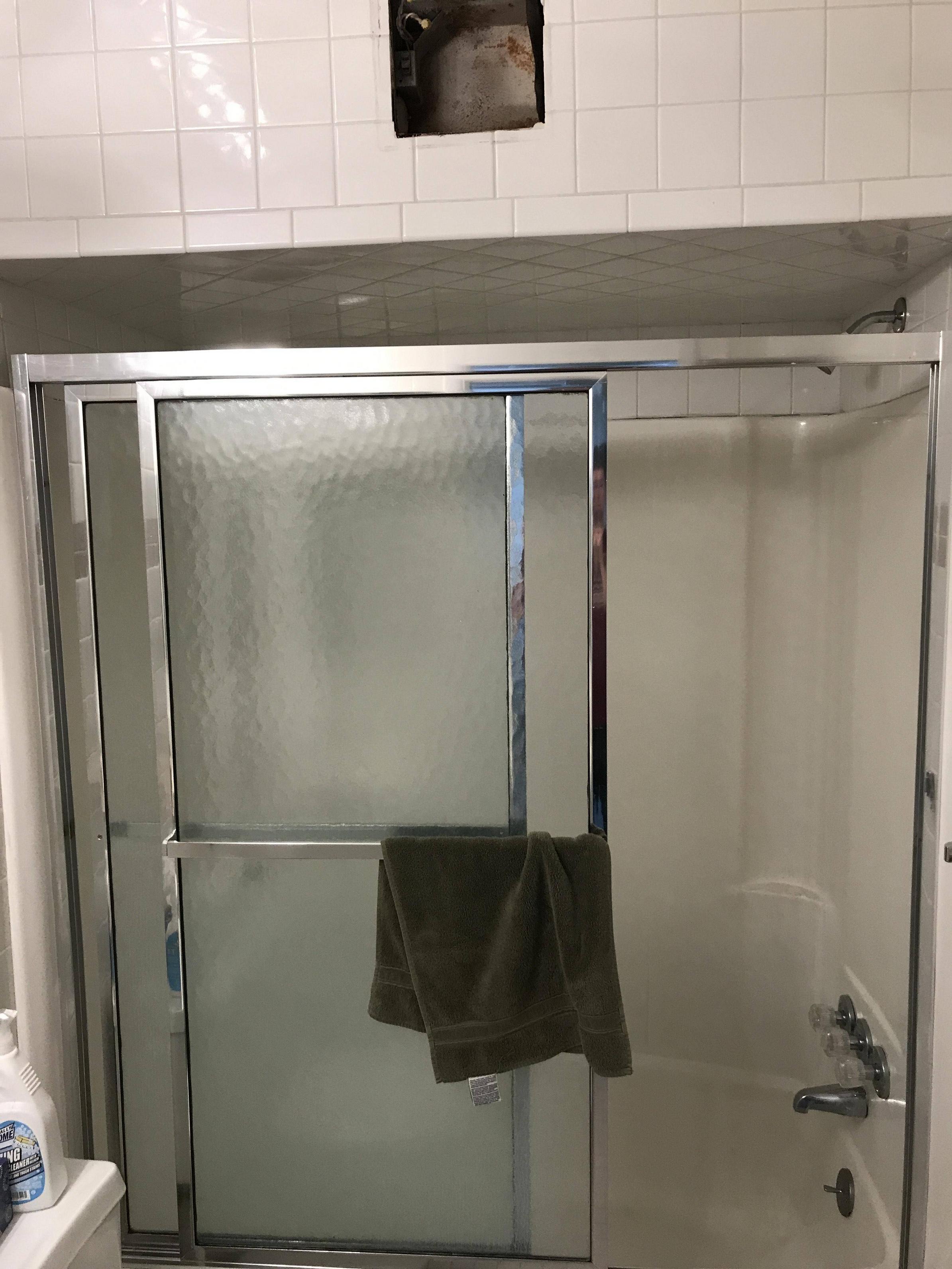 All I can see from the hole is what you see in the first picture; the vent can't be seen directly.

I could use tools to chip away the concrete, but I'd need a tool that can be used one-handed in a confined space without any visibility. (I tried a drill with a masonry bit in the hopes of knocking some chunks off, but it's simply too big and I can't see what I'm doing.) I've thought of using flexible duct taped from the inside, which could work around the obstruction, but would the tape eventually fail from the heat and humidity? I could make a better access hole, perhaps directly underneath, but then I'd have to retile my bathroom ceiling.

Ideally I'd like a solution that doesn't involve roofing work, since then the condo association has to get involved to approve roof work, making it harder to get contractors interested in the job.

I'd get some duct that is 1/2" diameter smaller than the duct going through the concrete. Run the smaller duct inside the larger one up to the roof then connect the bottom of the new duct to the tee with some mastic and foil tape and squirt some expanding foam between the old and new ducts.

Only proper way now is to make an access above the shower, so you can get at the whole lot from inside the shower cubicle. Yes, it'll involve cutting some tiles, but for the future, it'll be easier to access for any problems. Then you'll be able to open up the concrete at its lower level, and be able, using both access shafts, to put it all together far better than the cobbled up arrangement we see. Something like a small loft hatch, tiled the same as the top of the cubicle would look good.

Or, hire a small camera on a flexi, and chip away like a surgeon doing a keyhole operation.

2
What are some tips for installing a roof cap?
6
Bathroom vent through existing roof vent
0
Installing a Bath Fan Roof Vent Without Attic Access?
1
Re-purpose old water heater vent for bathroom exhaust fans
1
Ventilating a cat box through the dryer exhaust duct
1
Replacing Bathroom Vent Fan
2
How do I connect this old bathroom fan to an insulated duct?