Basement flooding from backwater valve pit groundwater... but why now?

We recently purchased a ~20 year old house with no disclosed history of flooding.

Over the winter season, we've seen significant rainfall three times. Each storm, we've seen a substantial flood in our basement.

After the first flood, we engaged insurance, who brought in restoration services. The folks from that company dug up flooring after the second flood and discovered a very wet backwater valve pit. Pictured: 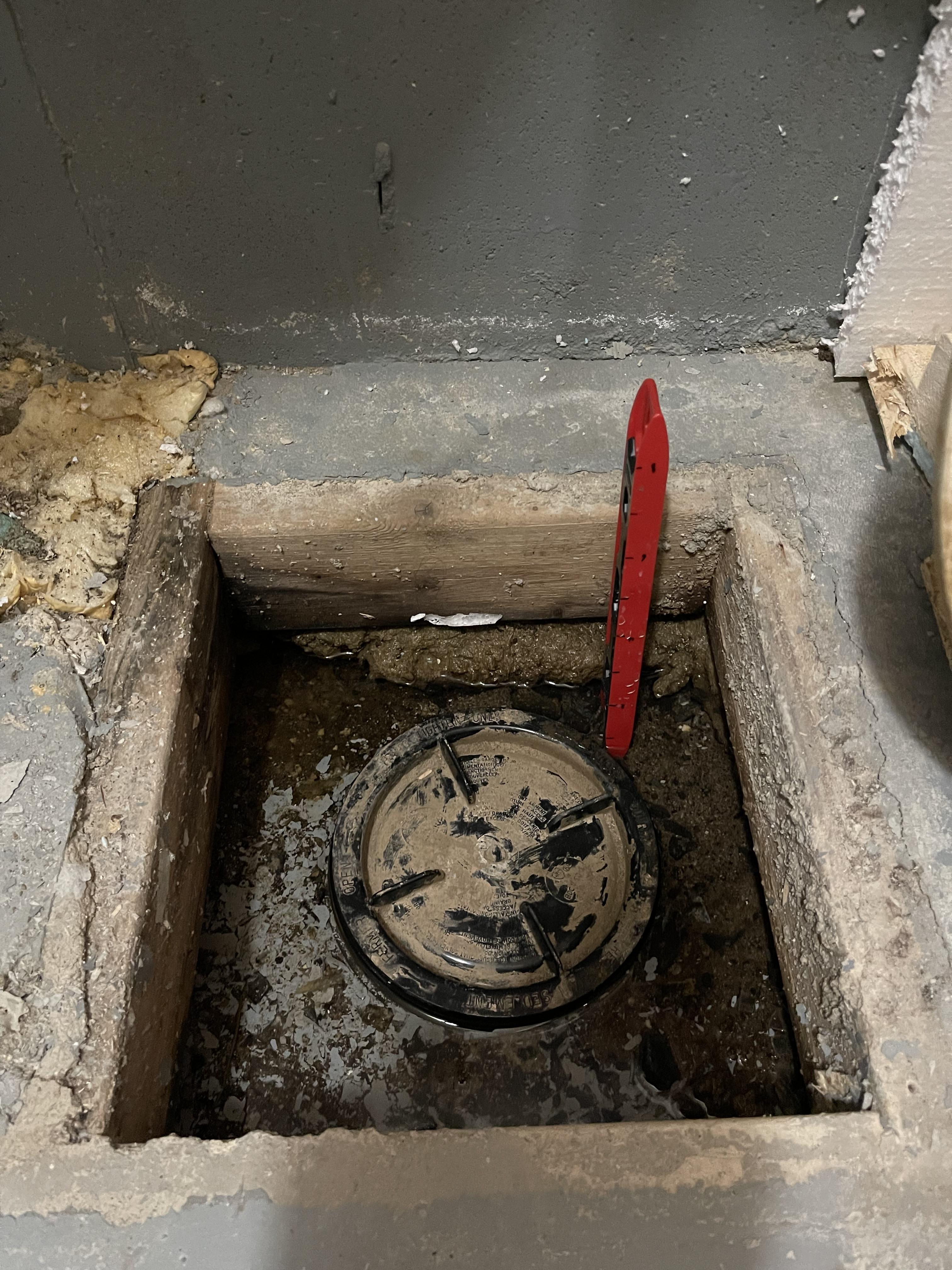 After the mold abatement and mitigation had been completed, we decided to leave the basement in disarray until another storm came to prove that the backwater valve pit was the source of our flooding problem.

Indeed, this past weekend we had ~100mm of rain, and the pit flooded. Luckily we minimized the amount of water taken in by opening up the backwater valve lid and the sewer system was able to take in the water. It drained all day at a high rate:

A slight tangent: before we opened the lid, we saw seepage around the seams of our foundation and a few other points in the basement (around the grout of a toilet, around some now-sealed floor drains). When we opened the lid and let the water underneath our basement floor slab drain into the city sewer, the seepage stopped.

We will engage contractors on this project, but I thought I'd ask here, too:

On (2): the house's eavestroughs and downspouts all seem to drain directly into underground drainage systems, so the first thing we plan to do is add elbows to these and direct the water away from the house.

We are also considering adding a sump pumpâ€”we do not currently have one.

There's two possibilities here, and neither is a simple fix

The weeping tile should be your first stop here, because you'll want to ensure this system isn't contributing to the problem. I don't think this is your entire problem, but we'll discuss that in a second. If you want a DIY first step, try digging by the wall next to your basement. You'll need to dig all the way down to the footing, which is where your weeping tile should be. Be careful as this could be actual ceramic tile. Modern versions are corrugated ABS pipe with holes covered by a "sock" to limit dirt intrusion. Either way, you don't want to damage the existing weepers. Hopefully it's there and working. You'll need to look inside to make sure it's not clogged.

Next, check the grading of your house. When these torrential rains come, does water pile up anywhere on the surface near your basement wall? Do you have proper gutters to channel the roof rain water away from your foundation as well? Last, but not least, you might want to add a waterproof membrane to the foundation walls. That's more of a pro job at this point (requires you to excavate your entire footing), but there's plenty of products that are designed to keep the water from penetrating the sides.

Once you have confirmed you have adequate drainage from the surface water, you'll move on to the more serious problem: ground water.

Ground water is beyond any real DIY help, because you have water sitting in the ground beneath your house (my bet is your house is in a lower part of your neighborhood). When it rains sufficiently, the ground (which is absorbing the water) can raise the water table in the ground such that it now touches your basement floor. Since it's concrete, it can easily wick through and flood the basement. The fix here is you excavate the floor and add drainage pipes inside the floor itself. They catch the water and channel it to a drainage basin, where a sump pump sits. The pump then watches the water level in the basin and, when it reaches a certain level, it engages to dump the water outside (these should not drain to your sewer line). That's a pretty involved process to try and do yourself. You'll want a foundation specialist to look at it and do any necessary tests and work on this.

On the upside, they did at least add a sewage backwater valve. That ensures an overwhelmed sewer line isn't your culprit here.

Not the answer you're looking for? Browse other questions tagged basement drainage flooding or ask your own question.

3
Should I be concerned with my back flow valve pit filling with water?
3
Sump pit filling very quickly from inlet pipes
2
Why did my basement start flooding while replacing sump pump?
1
Solving active sump issues
1
basement sump pump water level above drain tile
0
Basement Flooding suddenly. It looks like I have a French drain. Why is it still flooding?
1
Does this basement pit drain into the soil or the sewer?
2
Do I need to install drainage medium for my sump pump to work well in an old basement?
1
How can I determine the source of a basement flood?
1
Will using a flood guard on cellar drain cause excess storm water to go to upper floors?