Ideas for rigging a light switch to a double bifold door?

This has me stumped. There are lots of light switches actuated by closet doors. But I have a closet with a double bifold door (two bifolds that close towards the middle).

I can't think of, or find, any switch that can be readily mounted to this. The rail on which the doors travel make it impossible to use top switches. Switches meant for the jamb side of the door won't work because they expect the door to hinge away from the jamb, which it doesn't. Switches made for the leading edge of the door won't work because both leading edges move several feet and there is nothing else in the middle.

Some unwieldy ideas I have, but all of them have implementation issues:

Of all the above, the most approachable approach for me is the magnetic switch with a relay. The relay would go in a project box or perhaps inside a PVC junction box that I'd mount next to the receptacle where I pick up power. But this seems a bit Rube Goldberg for the purpose

I think you have already worked out the solution in your own mind. Good for you! 😆

If you're looking for an opinion on your conclusion, I would say that low voltage magnetic reed switch is your best option. This of course would require the use of a relay, but being a person who uses relays on a mundane daily basis, I would not consider such a solution to be Rube Goldberg. Well, maybe I'm a little bit Dr. Suessian, but I certainly wouldn't consider this a complex design, at least not overly-so.

Functional Devices makes a crazy contraption called a RIB CLC106 closet lighting control. It has the relay and low voltage power supply built in, eliminating the need for a project box and potentially pesky UL listing concerns. It also comes with the magnetic reed switch as a bonus. And the best part: it's dirt cheap!

You could certainly use a low voltage LED light fixture or even LED tape. They produce magnetic reed switches in a variety of voltage and current limitations. Please refer to this PDF for an idea of just how many options you have. You would need to select a switch capable of carrying the current of the load you are expecting to switch. Arcing, due to interrupting the capacitive load of the LED array could shorten the lifespan of the very tiny contacts in the switch. You could implement a small capacitor filter or fuse to protect it, but now we're back into Rube's territory.

I've seen something like this, though it was at 12V. There are two magnetic sensors, the kind that need a magnet near them to activate.

The magnets are at the "knee" of both the bifold doors, right at the top, and the sensors are mounted in the lintel or woodwork right above the magnet's at-rest position.

Trick is that the wiring was done in parallel so either door being even a little open is enough to trigger the light. If both sensors are activated by opening both doors, then the light is still on.

Presumably this is for a pantry or some similar kind of space, that is not legally a "room" If this is a room then you'll still need a light switch to be mounted near the doors in a way that conforms with your local building code/requirements.

But even if it was, you could simply parallel the two magnetic sensors with a third switch in a wall plate, where any one of the three switches could power an Ultra Low Voltage relay that turns on 120V to your main lighting.

Here is my implementation of the Accepted Answer.

At the top of the closet, a two-gang box with a raised ring is just right for the relay, a switched outlet, and two cables. The relay fastens cleverly to a knockout with the sensor leads entirely on the outside. I've ordered a half-blank cover plate to finish this. I had to think carefully about which knockouts to use so that everything would fit. I put the outlet on a pair of long pigtails so I can easily remove and reorient the ring depending on which way the PSU (which I have not yet bought) dangles from the outlet. 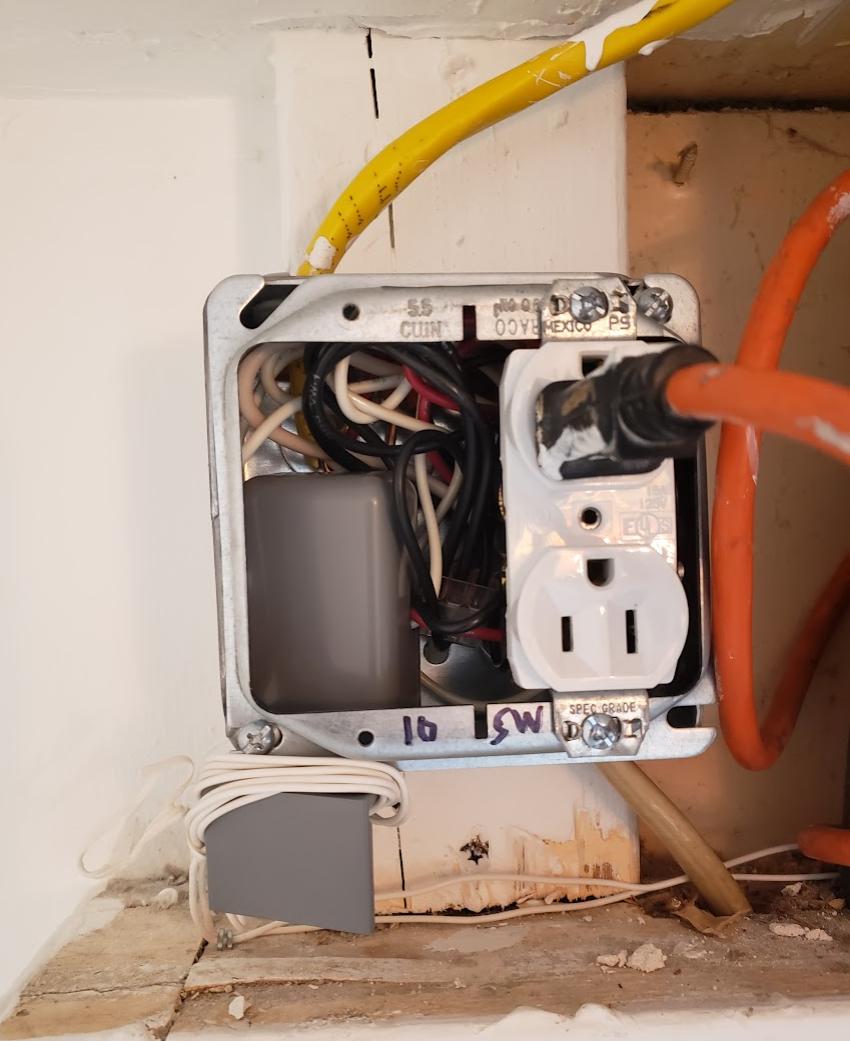 On the door, the included magnet is mounted on the door in a way that 1) brings it closer to the switch and 2) Allows the door to open fully (two doors actually parallel). The switch was easy to mount concealed by the rail. And the pair is mounted so not to interfere with opening or removal of the door. I'm waiting for a second reed switch to wire in series on the other door and I guess I'll replace that wooden mounting block with something more subtle and painted if "anyone" complains about it. 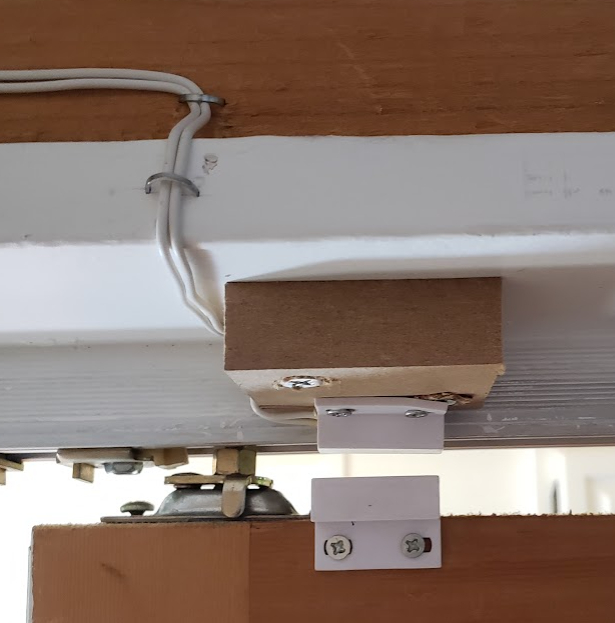 The question, and the answer that I marked correct, is based on the assumption that the light fixture requires 120V.

Another solution occurred to me when I looked at the device link in the answer. That is, break the assumption. If the high voltage gubbins of an LED fixture is separate, or can be separated from it, the problem becomes easier.

EG any strip lighting with a USB wall wart. You can just put a magnetic switch on the low voltage wires feeding the light fixture. And strip lighting is a good way to light a closet, you run it all around the inside perimeter of the door.

Not the answer you're looking for? Browse other questions tagged electrical switch closet or ask your own question.

5
How do I stabilize a knob on a hollow-core bifold door?
2
Wiring a double light switch
2
Home Light Automation - Emulate 4 way switch with relay
2
How do I add a switch/closet light to the existing end line light switch?
1
Need a wiring diagram for 4 way switch with source in centre and light on end
2
New light switch causing other switches to not work
0
Switch wiring for 2 single pole switches and 2 different lights
1
Help mounting trimmed hollow bifold doors
1
Converting closet to sliding closet doors