Our house's front yard is separated from the street with a low picket fence with a spring-operated gate. The latch of this gate has been consistently problematic because it is exposed to the weather and takes a lot of force and vibration from repeated openings and spring-assisted closings. I've tried many solutions over the years. I'd hoped that my last attempt—fat metal screws wrapped in plastic screw anchors—was going to last, but sadly one of the screws failed today. (See pictures below.)

What's a good solution for latching this darn gate?

Note that the pictures below are taken from a weird angle (because the gate isn't fully closed) which makes it look like the striker bar is offset vertically from the latch, but in real life they're aligned. 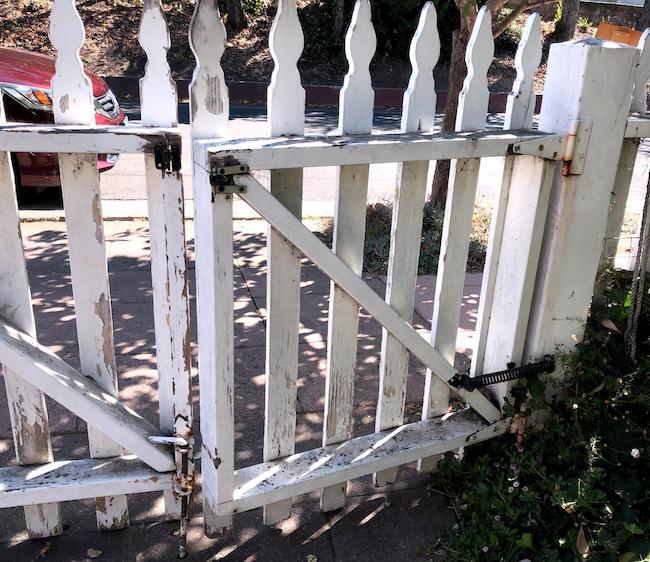 Here's a close-up of multiple failed past attempts, including several broken screws, plus some metal bars intended to reduce up-and-down vibration. (Yes, I know we eventually need to replace, or at least repaint, our ugly fence, but I've been trying to delay that as long as possible!) 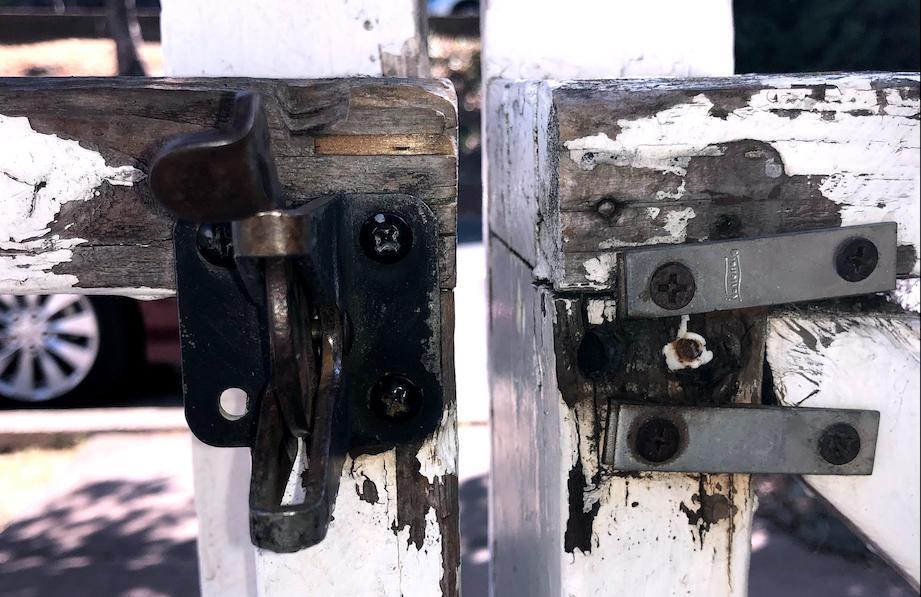 Here's the latest latch I used, with now-broken screws. 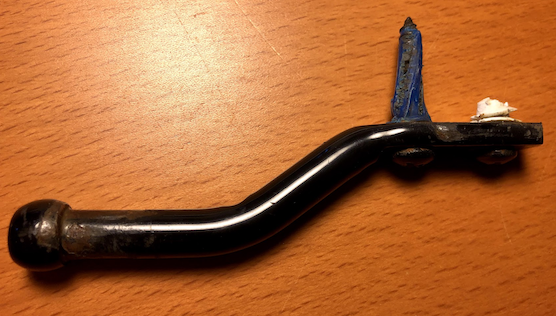 Screw anchors in wood is not a good idea and in rotting wood is a waste of time.

I don't like how the latch bar catches the force of the slamming gate, and is built so it acts as a huge lever acting on two small screws very close together. That will never last so the solution is to take that function away from it.

Now, the stop stops and the latch latches and the old gate will fall apart before the latch next gets torn off it.

In my experience, screws into wood will eventually fail. A better solution is to use thru-bolts so that the threads can't pull out of the wood. You might consider using stainless steel or brass to cut down on corrosion.

From the photos it appears the wood is quite deteriorated. You will likely need to replace the damaged/weathered parts.

You could try using stainless steel bolts and go all the way through the wood from the front and fasten with a nut and lock washer from the back. That is going to be a lot stronger than a wood screw. Although from the condition of the lumber it may be too late for a good solid connection.

To use existing holes:

Another option is to relocate the latch slightly lower.

Get two blocks of wood and screw them onto the fence. Screw the latch mechanism onto the wood. 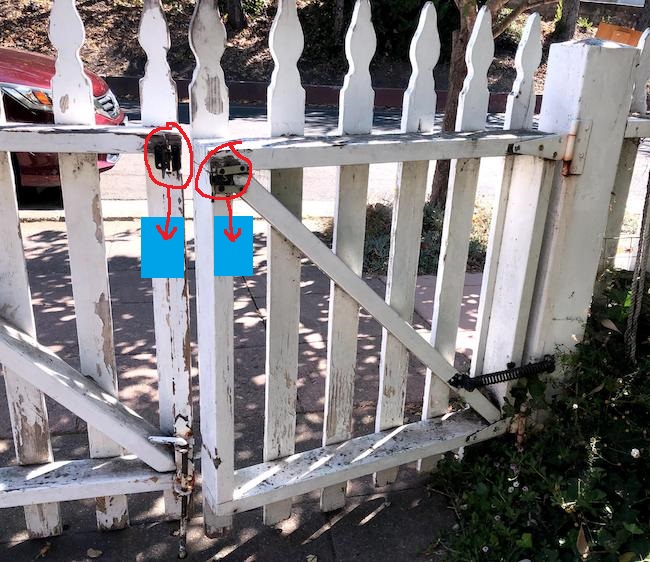 First thing you need to do is repair the gate itself. Get some wood hardener (a thin acrylic resin in a solvent carrier) and apply liberally to the areas where the wood is rotting (or just replace the gate). Then repaint it. If you don't fix the gate first, nothing is going to last very long.

Once the gate is in better shape, get some 90-degree flat angle brackets like these: 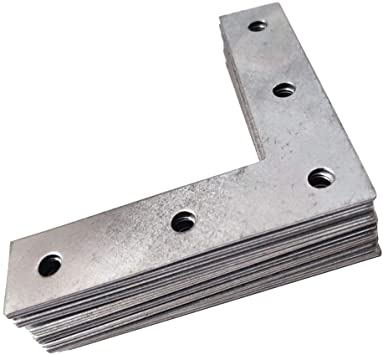 and screw them in at each corner. Even better, do as others are suggesting and install them using carriage bolt with washers and locking nuts. Then, get a good quality drill bit and use it to drill mounting holes for the latch, all the way through the bracket and the gate. Attach the latch the same way as the brackets, using carriage bolts and lock nuts.

Next, you'll need a plasma welder, 500lb of steel billet, and a dozen oxen. Let me know when you have those things and I will post the rest of the steps...

@Z4-tier has a humourous last line that actually makes for a decent long-term solution.

A welded steel frame is an excellent solution. You could re-attached the existing wooden pickets to keep it looking the same. Some 25mm box section tubing would be enough as a frame, or you could use up to 37mm / 1.5 inches without it weighing too much.

Also, the hinges and latch can be tack-welded on and if done properly will not come off for a hundred years. Should the hinges wear out and need replacing, future-you can grind them off and either tack new ones on, or drill and bolt new hinges in place.

A skilled welder won't even need to add the long diagonal brace, though a small corner brace in the upper shoulder would be a good idea should anyone stand on the lowest rail.

Painted to match the wood, you'd be hard pressed to notice.

There is something to be said for doing the repair once and doing it right. And there is no-such-thing as overkill.

From the looks of the gate, you'd have to rebuild the gate to get a decent hold on any latch you reattach.

The wood looks rotten as well as already having multiple holes in it from previous attempts at installing latches.

The right-hand gate was made improperly to begin with, so there's extra stresses on it and the latch that can be reduced by reversing the direction of the diagonal brace. You can attempt to address that with adding another brace or a cable in the opposite direction, but that still doesn't fix the problem of the disintegrating wood.

You state that you're trying to avoid replacing the gate and just want a band-aide solution. Unfortunately, that's no longer a practical solution. If you don't replace it now, you'll spend more time f--, um, fiddling around trying to get the latch to work than just replacing the whole thing would take.

Looking at it, you might be able to reuse the decorative verticals on the outside of the gate and just rebuild the frame, which is as simple as making the same rectangle with some new lumber and adding the brace from bottom left to top right, instead of the current top left to bottom right. The current brace wants to kick out the top left because of the weight below it. But switching the bracing will tend to suck in the bottom left and support the weight above it. Yes, this means repositioning the spring, but it'll make for a much stronger and less maintenance gate.

Using through bolts is one way to make this latch better, just make sure you use washers or carriage bolts to help prevent excess damage to the wood when tightening them down. Also, you might want to box in that top left corner to give yourself more area to install the latch. That seems the likely reason the brace was installed wrong, but that's a bad reason to install the brace wrong. You can simply add more lumber there and/or add some flat steel (or aluminum) sections to increase the area the force of the latch acts on.

Bolts and screws aren't really made for lateral/shear forces, just clamping forces. Once you have lateral/sideways movement in the fastener, it's going to break. It's also going to make the hole wider so the screws and bolts just fall out, which is what you are seeing. By adding the metal and/or extra lumber, with washers on the heads and nuts of the bolts, you can tighten down the bolts considerably and prevent crushing the wood as well as lessening the shear stresses.

You'll also want to use some method to lock those bolts into place. Thread locking liquids are good for that. Using the medium grade (blue Loctite) is more than enough for this purpose. If you use anything more than that (red Loctite), you'd better hope you got it right the first time, because the gate will rot apart again and the bolts will rust to dust before the thread locker loses grip.

Or you can use locking nuts or washers. IME, lock washers are hit and miss, but mostly miss. Wrenching down too hard on them can eliminate their usefulness completely, or simply just destroy them. A nylon insert locking nut (sometimes called a nyloc), is a better option than a lock washer. The problem with nylocs is that they have a limit to how many times they can be installed/removed and still function properly. Installing it and removing it once will greatly reduce its locking ability. It'll still work as a nut, but the nylon will have been damaged. Installing and removing it twice will essentially make it not a locking nut anymore.

Once you have the right-hand gate replaced, you can use the same techniques to rebuild the other side. However, that gate was built with the brace in the proper direction, so use it as a template to do a straight forward rebuild with the same geometry. The only thing I'd suggest doing differently is to not leave the one hole in the latch hanging out in space. Use some lumber and maybe some of the same metal bar stock to support that corner, put another fastener there, and reinforce the whole latch.

Using reinforcements on both sides of the latch, as well as getting the diagonals in the correct alignment, will keep that gate straight and working correctly for years to come.

It seems to me that the latch should be attached to the gate, rather than to the post. Then, when the gate slams, there is less force pushing the locking bar away from the wood.

Please take notice of the other posts about replacing or strengthening the wood.

Not the answer you're looking for? Browse other questions tagged gates latches or ask your own question.

0
How should I build a wooden gate?
2
How can I attach a safety gate at the bottom of the stairs?
0
What type of latch should I use for a sliding gate?
10
Suggestions for gate latch issue
0
Gate closer for large wooden gate?
1
How to repair this hefty wooden fence gate?
3
How to (re)attach this baby gate to the wall?
0
How to repair Garden gate latch 'spring clip'?