How to repair this hefty wooden fence gate?

Our place has a large wooden fence and gate. There's a gate for people, and then the fence itself can actually be opened by pulling up a latch from the ground. The gate for people ("door"?) has become unhinged this year and I want to figure out how to best repair it. Photos below to show damage:

Here's the gate itself. The hinge at the bottom-left is where the damage is. 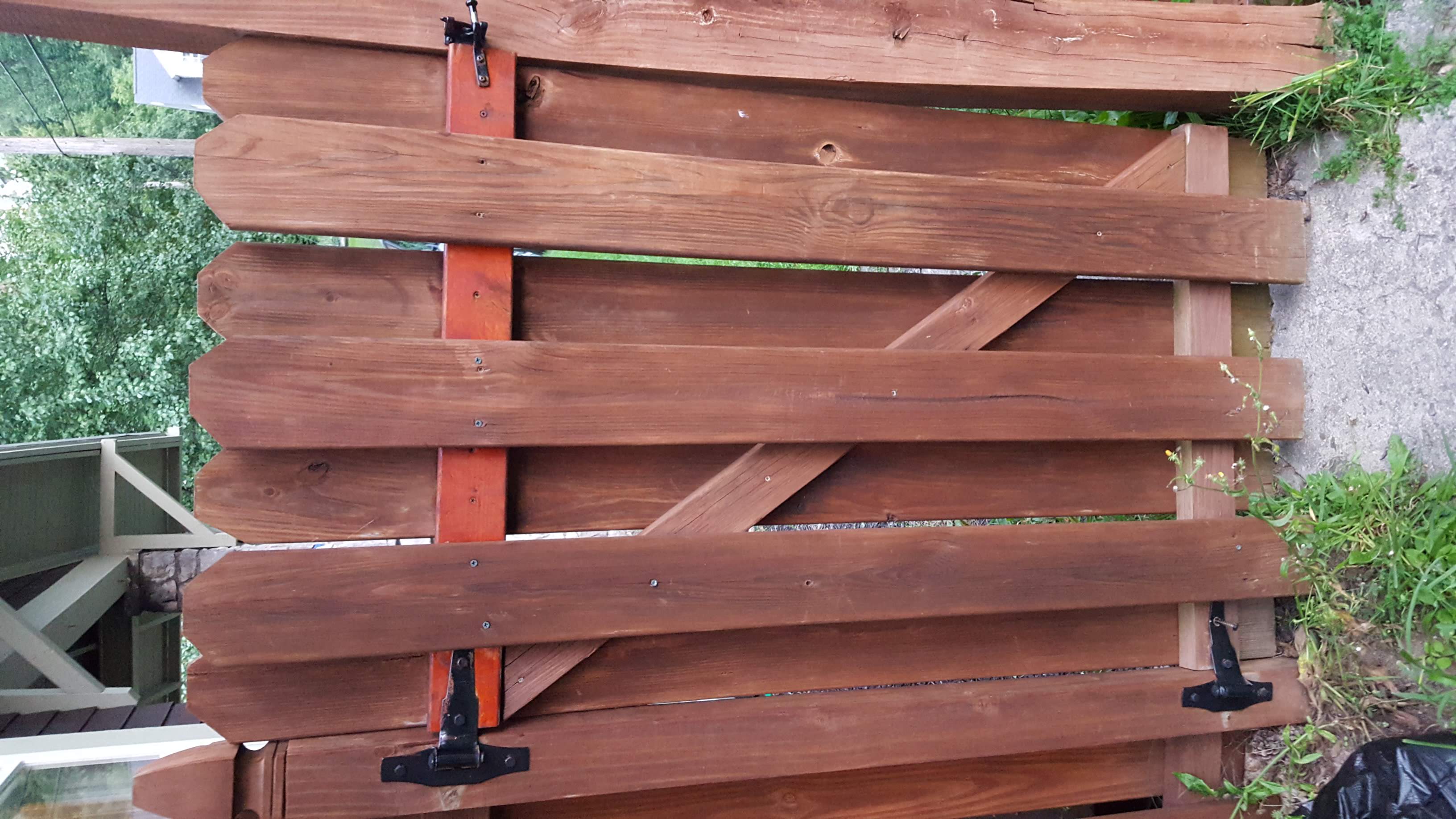 Close up of the bottom hinge's current condition. 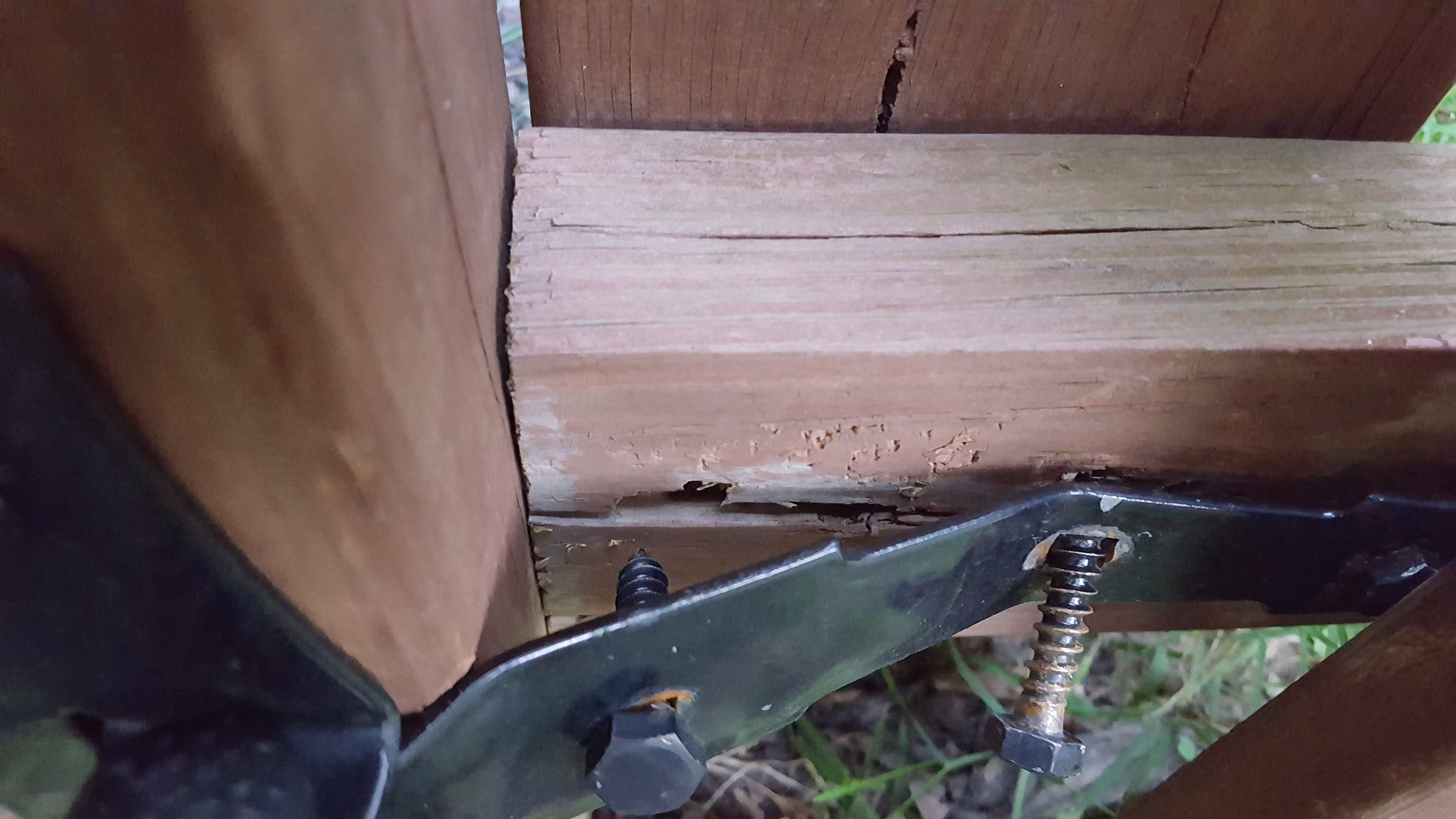 Another view of that busted bottom hinge. 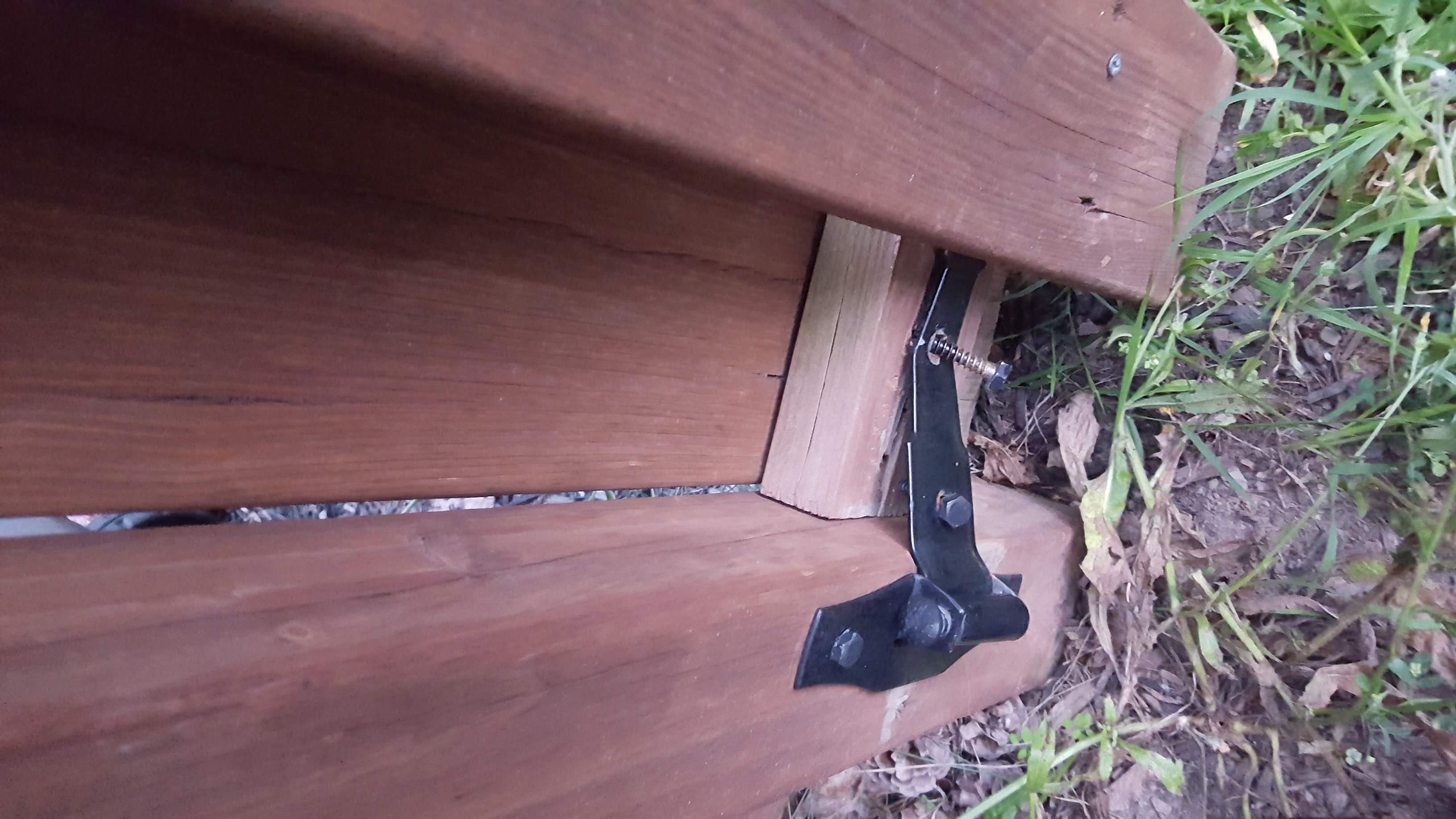 It looks like the hinge itself is undamaged, and it's simply that the screws lost their bond with the wood, either due to the wood deteriorating and/or too much force on those screws. That bottom horizontal 2x4 is pretty solid (aside from the torn up screw-holes).

I'm thinking to reconnect the bottom hinge back to that same horizontal 2x4 with longer screws and in slightly different screw holes. I'm not sure how to avoid the same problem happening again however. Should I first beef up the bottom horizontal 2x4 by screwing in another piece of wood on top of it (but that would tilt the door)? Should I add another hinge, but where (there's no horizontal 2x4 in the middle, and if I added one, it wouldn't extend across the door)? Can I add another latch on the right side of the door to take off some pressure from the hinges when it's closed?

Currently, when the door is closed it leans against the 6x6 beam it latches to, and when the door opens it has to be held up by the user or its latch-side will scrape against the ground. I presume both of those things happen because of the broken hinge.

Note that the 6x6 beam the door latches to is starting to bow a little bit, as are other 6x6s supporting this fence/pavilion (similar to this). We've asked carpenter and engineer friends about it and they said those posts should be OK for quite a while, but it does worry us (they're big, and all this wood is heavy and on one end attached to the house itself!) I share all that in case it affects options for supporting the gate.

The hinge is damaged, it's bent. You should either bend it straight or get a new one. The hinge has three holes for screws your only using two of them. That's putting extra stress on the two that you are using which is probaly why they pulled out. Hard to tell from the picture how bad the wood is split. I would not try to add any wood, if anything perhaps replace the bottom horizontal piece if it's split badly. If it was my gate I would drill holes all the way through and use a nut and bolt as opposed to wood screws to re-fasten the hinge. You should be able to find decorative ones that match. Someone else may come along with a better answer.

You may need to through bolt the bottom hinge. I can't tell if the gate is dragging when opened even grass puts a huge strain on the hinges especially the bottom one. If dragging this will pull the lag screws over time but through bolts will hold longer. Once the hinge attachment point is repaired if the top of the gate is still hitting I would add a steel tensioning cable with a turnbuckle to tension where the current 45 brace is (do not remove the brace) add the remaining cable and tighten to square the gate and that should solve the problems. I would agree with your friends the posts should be plenty strong to support the gate.

I would remove the entire gate and rebuild it with a new 2x4 frame. When rebuilding, I would switch the direction of the diagonal brace, so it extends from the latch down to the lower hinge.

Carefully remove each fence board and hammer the nails out. Build a new 2x4 frame, attach the fence boards to the frame with exterior screws. Bend the hinge back into place and rehang the gate.

You can probably save the existing gate with some through bolts and tensioning cables as @EdBeal suggested, but it probably would not look as good as a new gate. Price would be similar a new PT 12' 2x4 vs the steel tensioning cable.

Not the answer you're looking for? Browse other questions tagged repair wood fence gates or ask your own question.

3
How do I rebuild a large fence gate?
4
How do you attach a wooden gate to fence with metal posts?
0
What type of latch should I use for a sliding gate?
4
How do I hang a new wooden gate so that it automatically stays closed when it is shut but also stays open at its maximum open span?
0
How do I fix a plastic gate that will not close when hot?
0
Gate closer for large wooden gate?
3
Need help with sagging gate double gates
3
Fence gate sagging. Post twisting. Any ideas on how to solve this?
17
How to (more) securely attach a latch to a frequently-used wooden gate