Let me preface by saying that I'm not really looking for "shopping advice". I just need some direction on how to tackle this issue.

We recently purchased a house and it has a block fence around the back yard, with a side gate. The latch is facing the exterior so, I would like to put a lock on it. The issue is that the latch (located on the right side of the gate) is too close to the block to fit a standard lock through it. I've tried a few different kinds of locks and nothing seems to fit.

Any advice and/or direction would be appreciated. 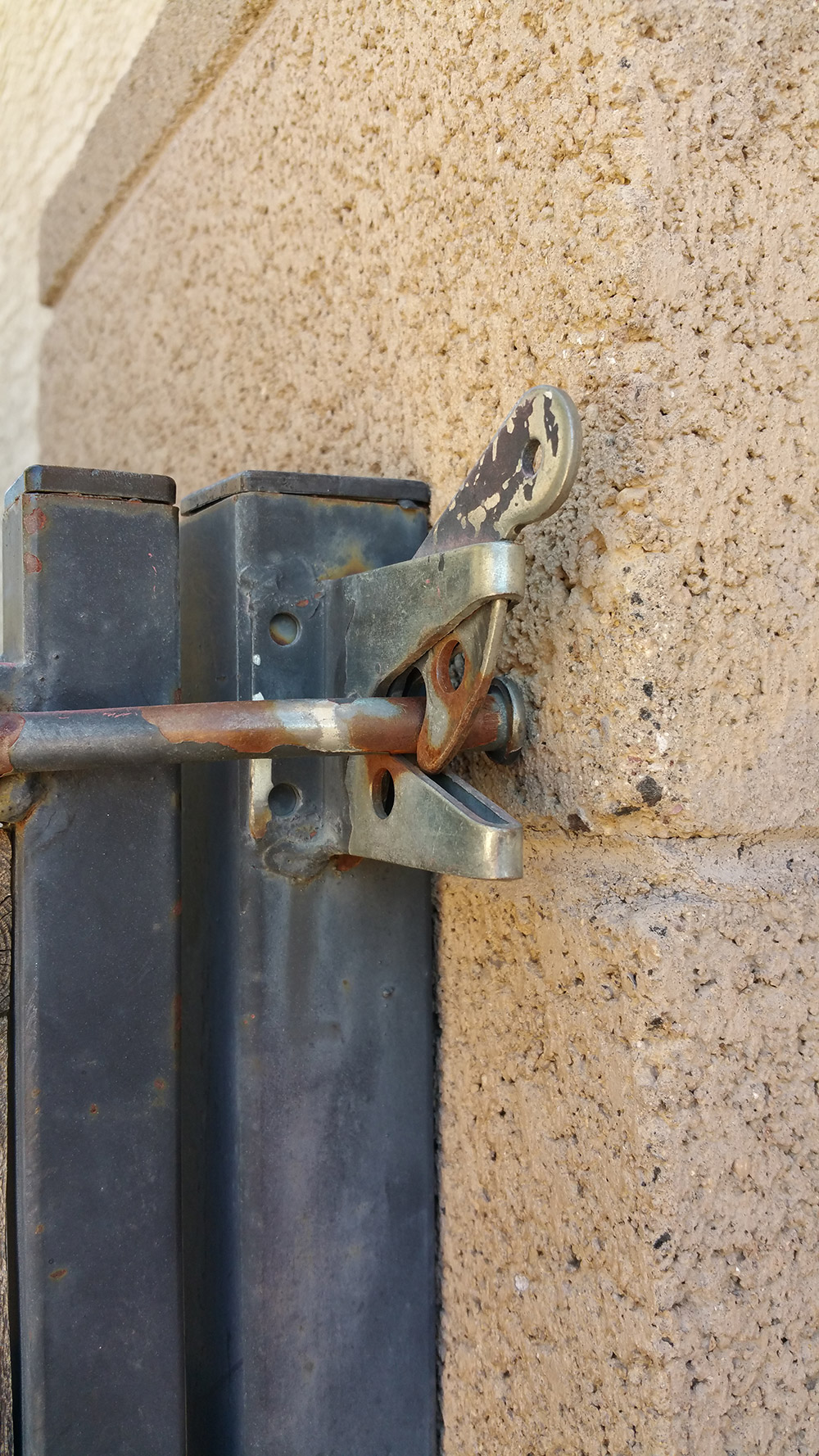 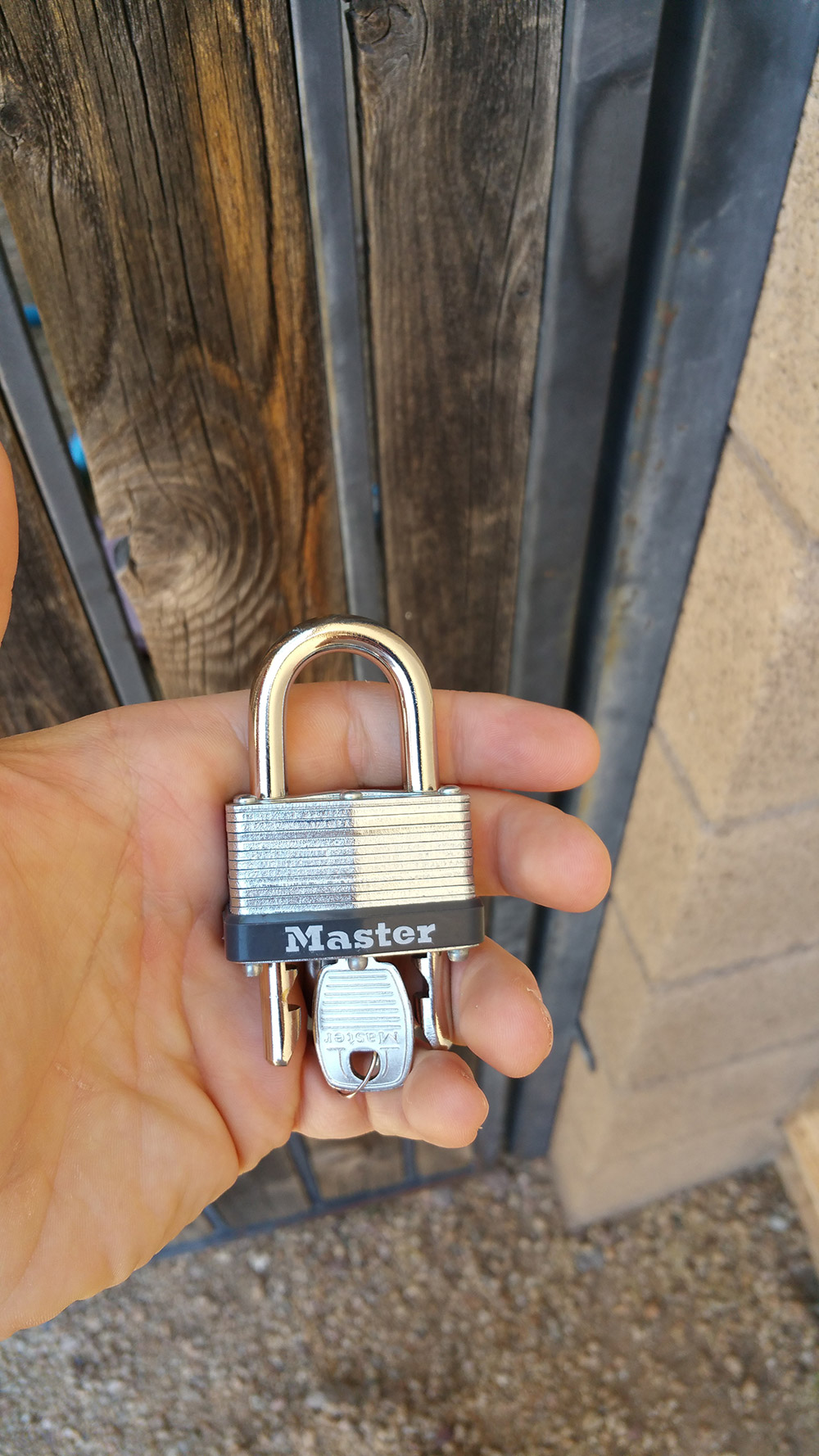 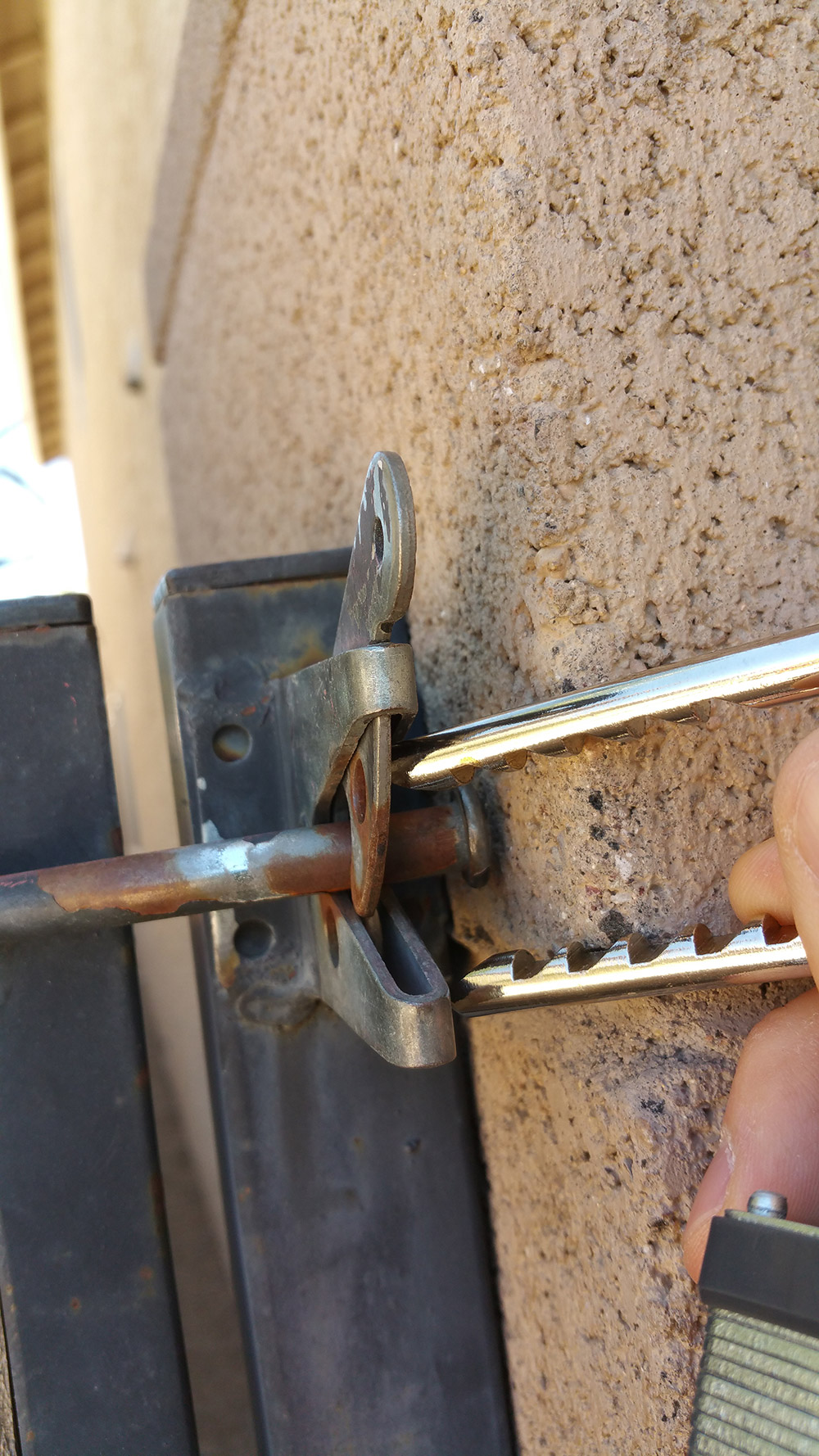 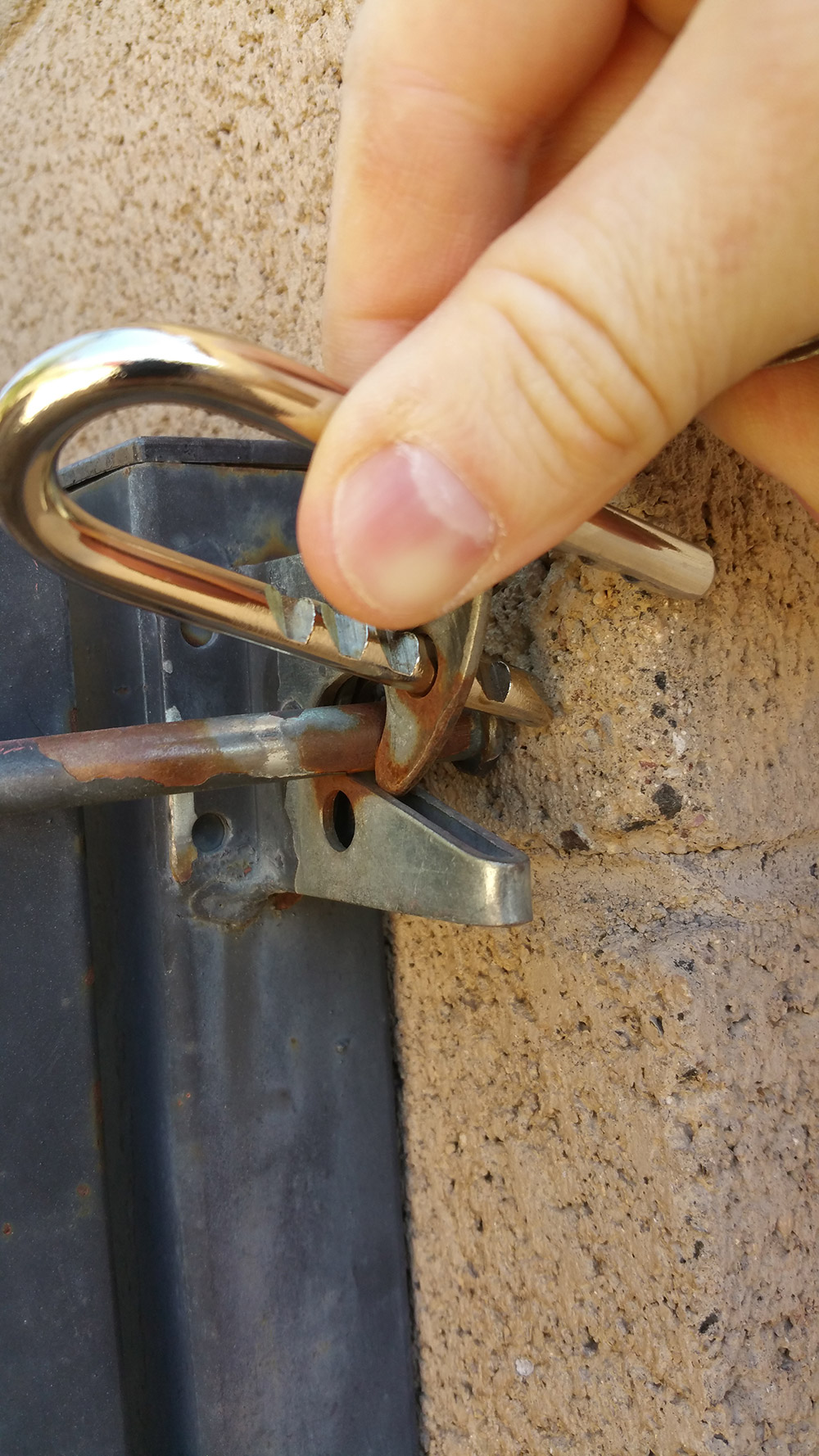 One option would be to drill holes through the post to allow you to use the lock that you have (or perhaps a slightly longer lock). 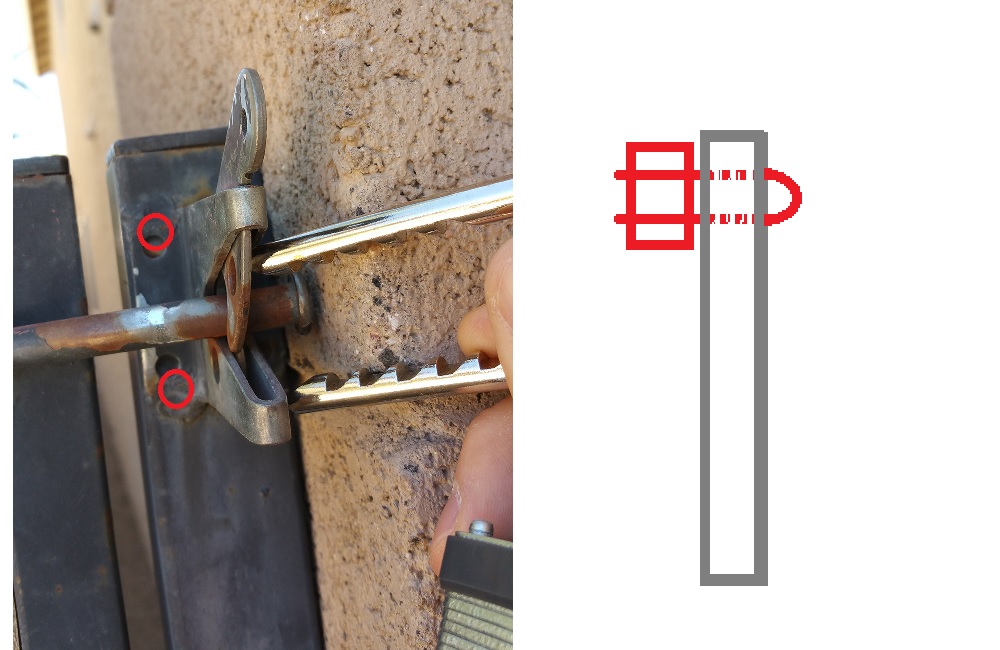 It would be fairly easy to retrofit a proper locking latch. 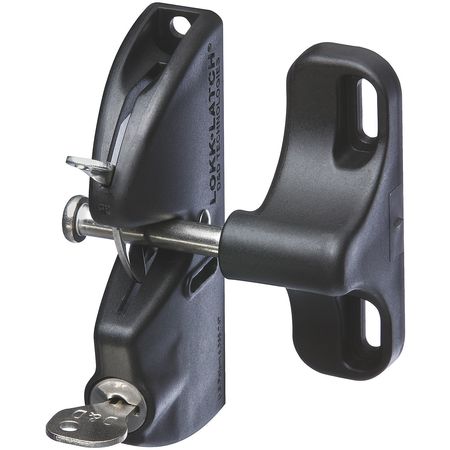 Product link (for reference only)

Here's one that locks from either side. You'd need to grind off the old one, drill for the new one, paint, and mount the new one.

There are cable locks that have a plain end to the cable that might fit through. 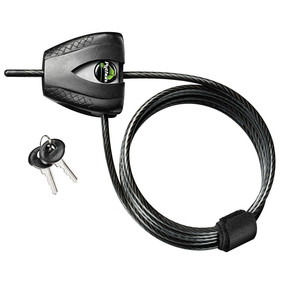 You might have to file the hole a little bigger in the lock mechanism to allow the end of the cable to angle through.

There are also shorter cable locks, but they tend to have a beefier cable end that is captive within the locking mechanism.

Maybe you can find an anvil padlock that would fit? 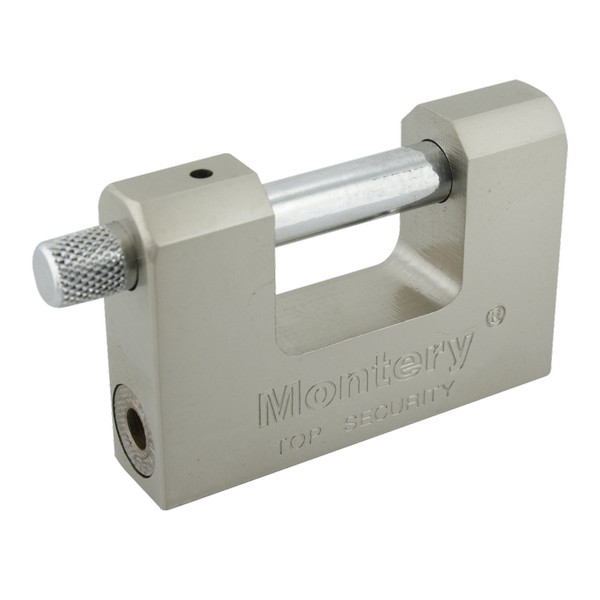 if you could get it tight enough, you could attach the lock in other ways to keep the latch from lifting. did you try any of these configurations? 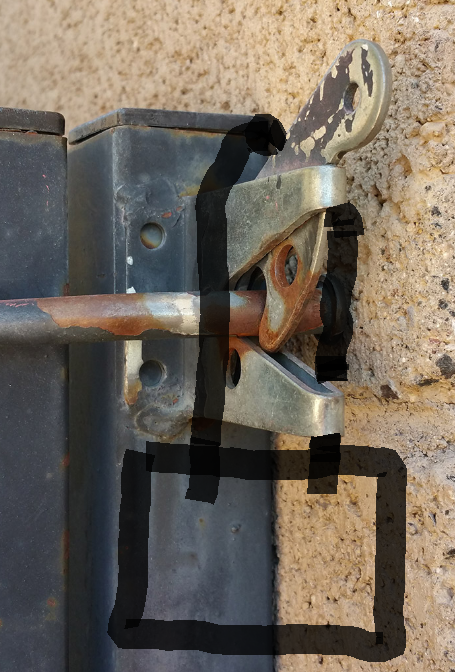 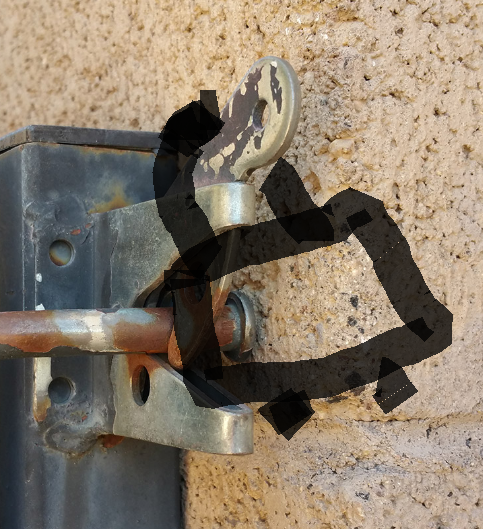 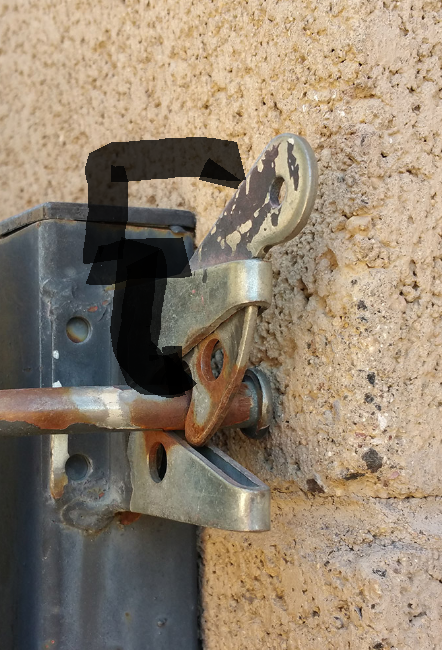 I would suggest reversing the lock. First the lock "should" be on the inside.

It's not ideal because you will have a "peg part" sticking out into the walk through area, but it will make locking and useing the gate 100 times easier.

If you want to keep the lock on the outside, that's fine, just reverse the peg part and the latch part.

Currently they appear to be welded on. You will need to break that. A hammer and lever should do just fine. When re attaching just use metal screws. There's no need to weld. If you have a disk grinder then you can smooth out the left over welds after you break off the old latch. Either way, your going to have to buy a new latch.

coteyrcoteyr
63633 silver badges77 bronze badges
Add a comment  |
-2
Want to improve this post? Provide detailed answers to this question, including citations and an explanation of why your answer is correct. Answers without enough detail may be edited or deleted.

Just buy a longer one that goes over the top and locks everything. You can get it in Ace Hardware for $7!

Not the answer you're looking for? Browse other questions tagged lock gates or ask your own question.

0
What type of latch should I use for a sliding gate?
2
Lock type for a door on a large box
0
Gate closer for large wooden gate?
0
Courtyard Gate Lock
1
How to repair this hefty wooden fence gate?
3
Need help with sagging gate double gates
0
Using wire mesh on yard gate for exclusion
0
How to repair Garden gate latch 'spring clip'?
1
Metal gate slide bolt jammed
17
How to (more) securely attach a latch to a frequently-used wooden gate