Hoping someone can help me with this. I have searched the whole dang internet multiple times and can’t find the answer to my question, so I am posting it here. I have added two 120V-20A circuit breakers to my panel, and ran 12/4 MC to a string of five “2-gang” boxes (the first box will host a pair of GCFI’s, different than what I drew). I’ll use commercial 20A receptacles in down-stream 2-gang boxes. Total length of the run is under 100’.

Here’s where I need help (just a review and approval if I’m good). My plan is to use:

Please see pic. It’s all surface-mounted MC and boxes, strapped with Minerallac 125 Jiffy Clip one-hole clamps with holes above the MC, and fastened within 11” of each box, 12” everywhere else. I will pull a permit and have the work inspected because I have an affinity for doing things right.

My rationale for “assuming” this is correct is that it’s how I would run 12/2 to a string of 1-gang boxes/outlets. My main confusion is whether or not I should be bonding all of the neutrals in each 2-gang box, but think it’s not required because the neutrals are all bonded together in the panel. Is there a safety requirement in the code that requires the bonding of the neutrals in each receptacle box? And if so, can you please point me to the code so I can read/learn/understand? 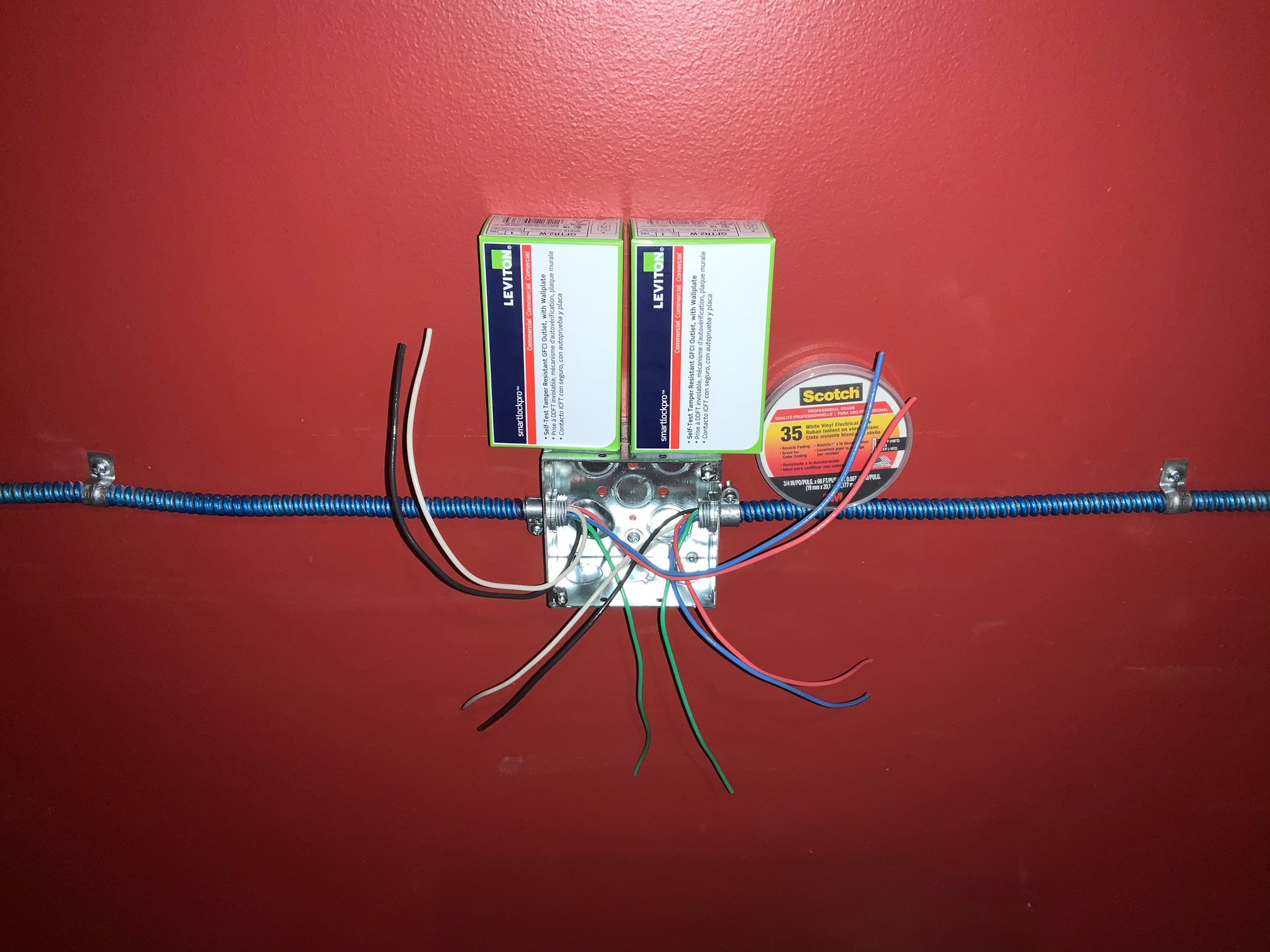 You need to keep the neutrals separated throughout the circuit for a couple of reasons. First off, if you want to put GFCI on this, the GFCI will tell you if you cross or join the neutrals by stubbornly refusing to stay un-tripped, so keeping them separated is a good policy that way. More importantly, though, neutrals rely on being protected by the overcurrent devices of their partner hot wires, as they don't have fuses or overcurrent breakers of their own. As a result, if you tie the neutrals together, and one of them opens, you'll potentially put 40A down a 12AWG wire, which is going to get rather toasty and melty...

And yes, you have the wrong cable for the job

While reidentifying neutrals to hots in a cable works, you can't take a wire smaller than 4AWG that's not white, grey, or striped with one of those two colors and legally use it as a neutral. To be fair, if one was working under significant duress, tape-flagging a hot to a neutral is by no means the worst thing you can do, but it sounds like you'll have to order in some 12/2/2 MC and do this over.

Can't do that. You have the wrong cable for this job.

White (in a cable) can be re-identified as hot, but other colors cannot be re-identified as neutrals unless they are 4AWG or larger - neutrals have to be white or gray (they can be white or gray striped with other colors for identification purposes.) Three CONTINUOUS white stripes (the whole length of the wire) on any color but green is also acceptable.

NEC 200.6(A) (read it and weep, since you obviously already bought and cut the wrong cable for the job.)

The use of white tape, paint, or other methods of identification isn't permitted for grounded conductors 6 AWG or smaller.

12/2/2 is a cable that would work. That's commonly black/white/red/white-with-a-red stripe. Black/white/red/gray would also work.

The only way I can see to "save this" would be to get a 20A 240V GFCI, and then you could use the one neutral, and two of the three hots to run a MWBC (Multiwire Branch Circuit - the GFCI HAS to be done by a 240V GFCI breaker for that to work correctly) rather than needing to buy new cable. If you have some other place where 12/4 would actually be useful, just get new cable.

Harper's Law: Buy the wire LAST after all research is finished.

In the future use FMC or EMT.

Really, since you want a metal-jacketed system with an arbitrary combination of wires inside, you would have been better off selecting Flexible Metal Conduit.

However, noting your installation style in the photos, the better system still would be EMT (Electrical Metal Tubing). EMT is a nice compromise between hard pipe and "easy to work with". It cuts with a hacksaw (why is your wire stripper tapered? To ream the burrs off EMT!) and uses very cheap fittings and the same 4x4 metal boxes.

But EMT does something even cooler for you: provides ground. You can get the kaboodle done with 2 spools of wire (white+black) and a 5-pack of colored tape ($5)... I myself do enough of it I just invested in 10 spools of wire. (none green since EMT is ground).

You use stranded THHN wire which is a pleasure to work with. Although it's a nightmare to land on side screws, so either pigtail with solid wire, or use "Screw-and-clamp" type receptacles.

Further, with EMT conduit, when you need another circuit, you just pull it into the conduit! You future-proof with pipe instead of wire. Mind you there's a 4-circuit practical max, and circuits 30A or above need special derating.

You must mark wires to indicate which circuit they're part of. However, in THHN wires, functional remarking is not allowed (can't buy just white and mark all the hots with black tape). Which means, you're free to use tape markings to distinguish circuits. So green-taped white and green-taped black are simply Green Circuit, they didn't become grounds because that's not allowed.

Can't use blue as neutral. No remarking is ever allowed on anything #6 or smaller except neutral to hot, and even then only in cable (not EMT). To spare the wire you've already laid, wire it as a Multi-wire branch circuit (MWBC) sharing neutral. Cap off the blue wire.

People always pooh-pooh "just putting a GFCI recep at every recep". That's understandable since it entirely wastes the GFCI downline protection feature. However, let me make the case for it.

Don't bond the neutrals from the two circuits in the boxes. Treat them as two entirely separate circuits (because they are). This way if one neutral breaks the circuit stops working and you don't overload the one neutral wire with loads from both circuits. You probably wouldn't be able to get the GFCIs working right anyway if the neutrals on the two circuits were connected downstream.

1
Wires barely fit in gang box, is this okay? If not, where to get deeper boxes?
1
What size plate for 2 1-gang boxes side by side
1
How can I fit a face plate to two devices in separate single-gang boxes?
1
Follow-up to 12/18/20 Question about Feeding 2-Gang Receptacle Boxes with MC 12/4
1
Best approach to convert single gang, non-GFCI outdoor outlet to two GFCI outlets on two new circuits?
0
Best Circuit for Kitchen Receptacle
1
New outlets installed with wires for switch control, but tabs left intact
0
Is it safe to use new work plastic device boxes with spray foam insulation?
1
Pulling outlets from the wall for backsplash install