I live in a high rise apartment built in the '70s (USA), and this afternoon we suddenly lost all power to just our unit. After some investigation we found that the main disconnect (70A) powering our unit had tripped. When I looked into our own load center, the oven/range breaker (50A) was also tripped.

We weren't doing anything unusual - the oven was on and some lights, but we've often had the dishwasher/lights/hair dryers/etc. running simultaneously. I find it strange that both the 50A and the 70A tripped simultaneously. Does anyone know why this can happen?

If it's relevant, I have installed some LED light bulbs into dimmers that are not for LEDs (on different circuits from the oven/range circuit) and some of them were on at the time. Doesn't seem like that should be relevant but it's the only thing I can think of.

UPDATE - found the root cause! It turns out the range and the cooktop were combined together in a box in the cupboard with wire nuts and then a single line was run to the 50A breaker. Wires in one of the connections melted the plastic and shorted, tripping the breaker.

Currently we have only the cooktop connected, as there's significant work required to bring the unit up to the current code (last remodel was 10 years ago). They'll have to move the panel outside of the closet and increase the size as all the current spaces are doubled up.

Photo of the carnage - thank you to the poster who told me to keep the breaker shut off! 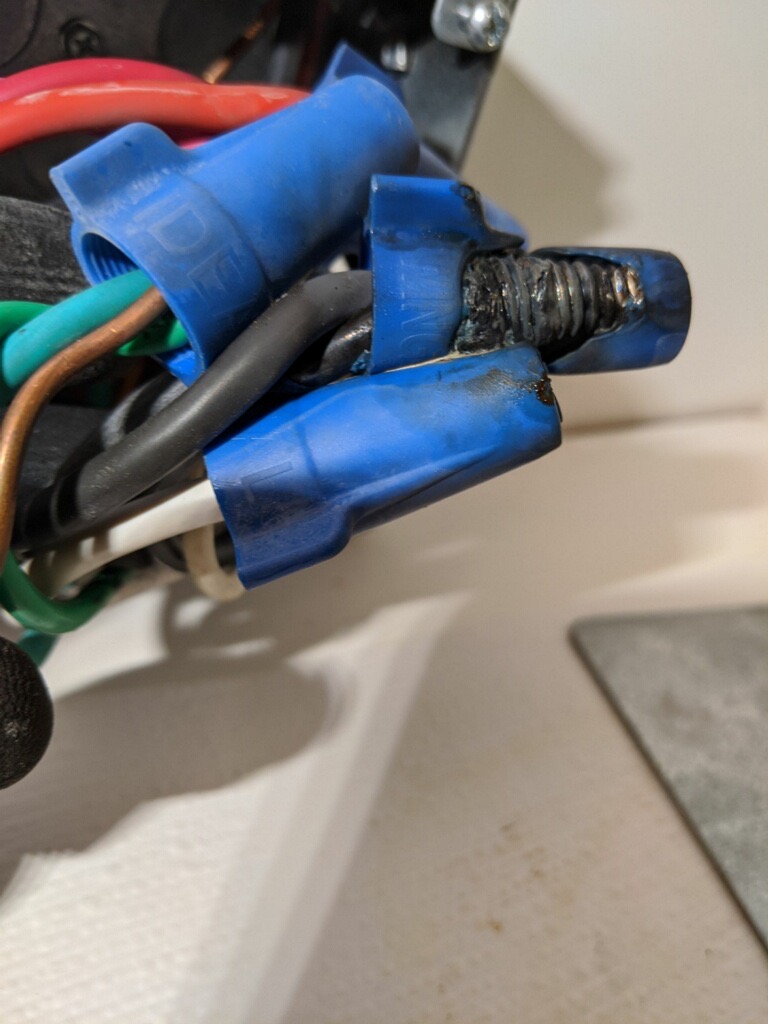 The 70A and 50A tripping at the same time means:

My guess is an element (oven or cooktop) failed but short circuited along the way, tripping the breakers.

I'd be extremely wary of turning on the 50A (the 70A is fine) without getting the oven checked by a professional first. If you're in a rental, call the landlord.

2
Breaker being tripped - Oven or wiring?
4
Why would a short cause the main breaker to trip instead of the branch circuit breaker?
3
What amp breaker for 20 Amp electrical oven and 40 Amp electrical range on same circuit
1
Washer & dryer lost power after the main breaker tripped
2
220v outlet safety question - Circuit breaker not tripped after a fire
0
Breaker tripped under no load?
2
Can I use a 60A circuit for both a cooktop and oven?
22
subpanel breaker tripped as well as main breaker - should I be concerned?
2
What amp breaker for 4500w electrical oven and 9600w induction cooktop on same circuit
0
Federal Pioneer Main Breaker Tripping