How do I tell this bird to nest elsewhere? [duplicate]

Ask Question
Asked 5 months ago
Active 5 months ago
Viewed 69 times
1
This question already has answers here:
How can I discourage mud dauber from nesting at my entrance? (2 answers)
Closed 5 months ago.

I seem to be dealing with a tenacious and stupid bird—tenacious for twice rebuilding its nest, and stupid because that location is inherently unstable for a nest, or so I think. From the movement of a suspected bird hovering on a nearby tree, I believe the bird in question is an American Robin.

As much as I like the idea of a bird finding refuge near my house, and as much as I liked to offer space all the way until the hatching season is long over for a nest over the outdoor (but unused) speakers in my backyard, I know from experience that some birds can be pests. Pigeons are territorial, are very dirty, and are impossible to shoo off once they establish their territory. 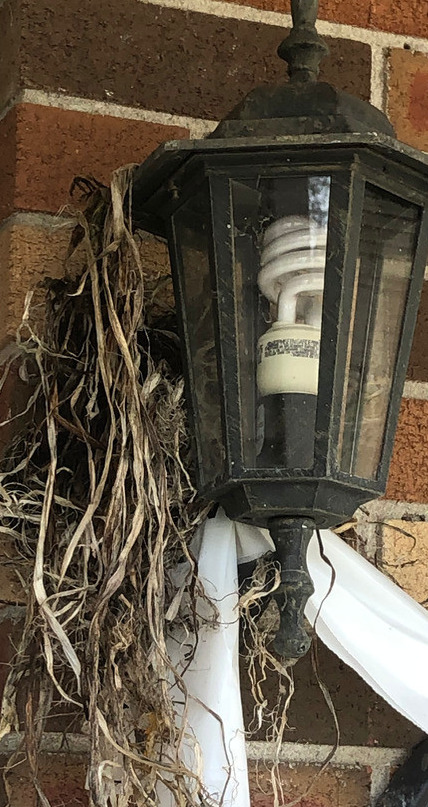 The first time I saw it I pushed the nest away and put the strands in the leaf container nearby. (An open bag of tree leaves only acts as an invitation to birds and more). The bird returned immediately and asserted its space by building another nest. I tried again, ever so gently, to point out that this is really not the right place 1- because the residents really do not want to be attacked every time they step out of their front door (the bird could consider their passage trespassing so close to the bird's sanctuary), and 2- the bar holding the lamp in place is much too thin to act as adequate support for a nest.

Hence the second time I both pulled the nest down and added a plastic bag on top of the lamp to make it harder to access that spot, and more slippery to build on top. As you see in the picture, the bird dropped the bag down and rebuilt.

How do I tell this bird to nest elsewhere?

I may have an even more serious problem from the wasp nest you see in the picture. I believe it is uninhabited, or at least no longer inhabited. (In a previous incident I've seen that they make their presence known, if they're inside.) But I'll handle these nature elements one at a time. They're too strong for me.

In my experience you just need to keep taking the nest down and disposing of the materials where there bird cannot get them. Eventually they will give up and try a better place.

As far as the wasp nest, that's a mud dauber nest and it's from last fall. All the little ones have bored their way out and left.

Not the answer you're looking for? Browse other questions tagged pest or ask your own question.

0
How can I discourage mud dauber from nesting at my entrance?

13
How can I have a pond but prevent mosquitos to nest there?
1
What type of snake is this?
5
How can I locate the entrance of a wasp nest, and prevent wasps from entering?
3
How to remove wasp nest and let them leave
2
Bird sleeping and eating soffit. How to make sure it is not coming back?
1
does anyone know this bug?
1
How do I get bats in the house to leave?
1
What (cheap) material could I use for a squirrel baffle atop a bird feeder?
0
I think there might be a wasp's nest in my garage or in its walls, how can I tell?