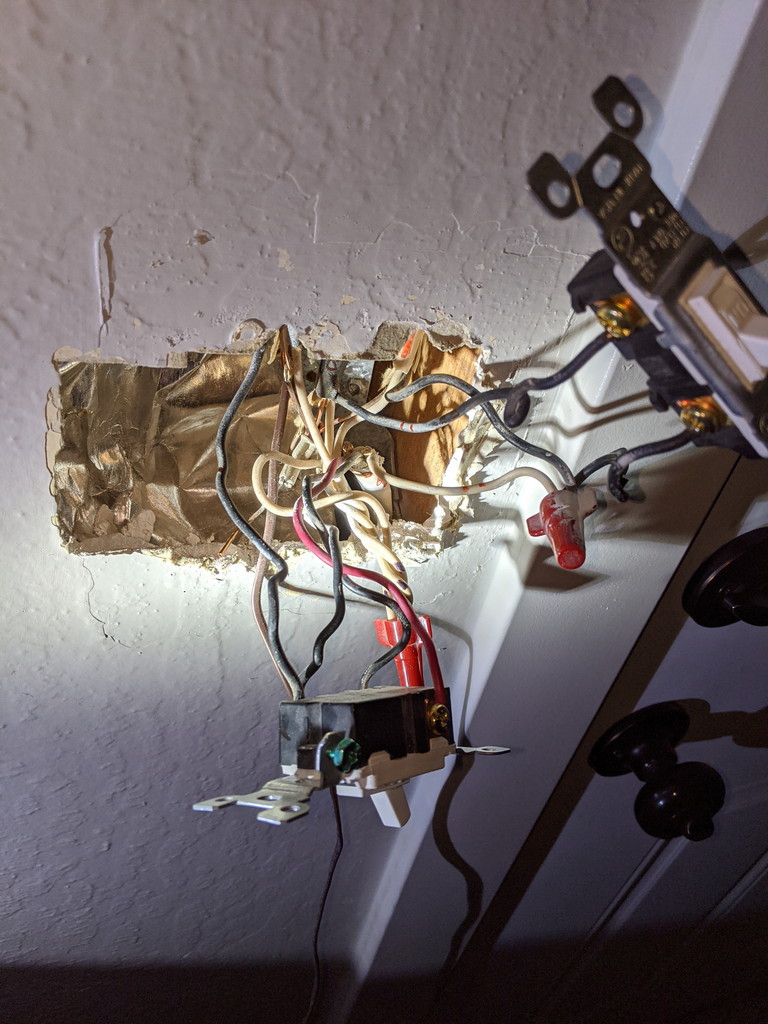 I started a project to add a 16v line for a video doorbell and, as always, ran into some trouble.

Split level house was built in the 70s and has a 4 way switch and a single pole right by the front door. The siblings to the 4 way are top and bottom of the stairs. The single pole controls the porch light.

I've identified the source line and the leg running to the porch. However there is something wrong with the 4 way.

As you can see in the picture, this is a 3 way switch, which led me to believe that it is either the first or last switch in the line up. When I looked at the other switches, the top of the stairs is a 3 way switch. The junction box only has a single 14/3 with red to bottom right, white to top and black to bottom left. Too dark to confirm without disconnecting everything, but it looks like the same style as the middle switch with the travelers on the bottom and common on top. The bottom of the stairs has a 4 way switch, but it shares a junction box with another circuit that I couldn't shut off so I didn't take it all the way out.

Back to the one that I'm working with, I've tested it with the circuit on and the only live wire is either the bottom red or black, depending on the state of the other 2 switches. That matches what I know about 4-ways. However, it has two lines going into the common. That, and the dead end on the switch upstairs, I don't understand.

Is this up to code? If it is I don't need to change anything expect add a spur from the line feeding the porch light to a transformer.

I think I figured it out. Fixed my typo with 18/3 vs 14/3. Mixed up because I ran the 18g for the doorbell. Also had to resize picture to be under 2mb. Attached now before I took anything apart. All markings on all wires are from me trying to figure it out.

Does that make sense? I can't figure out why the top switch can turn off the light if turned on from the middle or bottom switch. It must run from the middle switch, up to the light then back down to the top switch. Yikes. I've previously replaced the fixture above the ceiling and I don't remember seeing anything up there that set off alarm bells but now I want another look.

Whatever, it works. I just very carefully marked each wire with what terminal it is connected to and didn't mess with it. Replaced the double gang with a triple, but forgot to get the divider plate for the low voltage side, so I haven't put the transformer in yet.

Edit 2. The brown wire is 18g that is going to the doorbell. In the picture I already took out the plastic 2 gang already, but you can still see the metal bracket in the back it was mounted on. Hate those things, take forever to get out. I've replaced it with a 3 gang box but haven't been able to find anywhere local with divider plates so the transformer isn't hooked up yet. I want to put the transformer inside the box so it doesn't make contact with the foil from the insulation.

Wow, this is a tangle. Here's what's really going on here.

Your photo doesn't document which (non-visible) terminal on the 3-way is common. But we can figure it out for 2 reasons: a) we can see one traveler, and both travelers are always in the same cable. And b) the upper right has 2 wires, and there would be no earthly reason for another cable to tap one traveler. So confidence 100% on that.

When the non-traveler in the cable is white, it might be neutral. But this one doesn't go to the one neutral bundle. This one joins two other blacks. That doesn't tell us whether it's always-hot or switched-hot. But given that there are 2 wires on the 3-way common, that leaves only two possibilities:

The second one makes sense to me, so I'm going for that. Here, I've installed "colored tape" and a tracer line on the appropriate wires to designate their function (I forgot the switched-hot for the porch light; tag that blue). 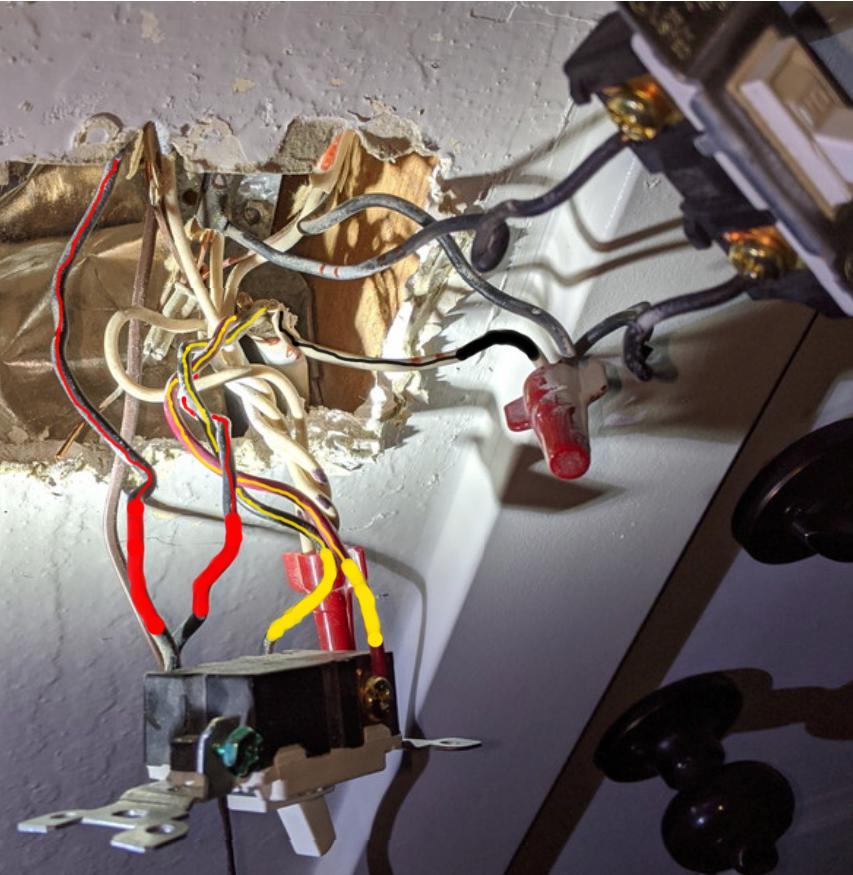 If testing proves out this guess, I strongly recommend physically marking the wires as such. Given the complexity of this circuit, it will save you or the next person much head-scratching later.

Really, wires should be marked the same on both ends, but I don't see a need to get out the fancy ladder to access stairwell lights just to mark the hot red; it should be obvious to anyone that a lamp's hot wire would be switched-hot. The 4-way, on the other hand...

Colors mean nothing in 3/4 way circuits

So what we know, is if black and red are travelers on this cable, then that must also be true for this cable - this cable only - at the 4-way switch. So if you can measure the 4-way and figure out which terminals change when this switch is thrown (i.e. do not change when the 4-way is thrown), you can mark those 2 travelers yellow also. You MUST mark that cable's white black. (red is legal, if it proves out to be a switched-hot after all, but you can't leave it white).

The remaining wire in the other /3 cable must be whatever this remarked-white proves to be. (presumably, always-hot). Note that aside from marking reused white wires, Code says that if neutral is absent but always-hot is present, white must be used for it - that way it always tests as hot, leaving no doubt it is not a neutral.

Well, that was hard. If you remark wires as I advise, it won't be hard the next time.

Y'know, old Code used to say you could skip marking the neutral if the usage was obvious - Code meant "like in an old style switch loop, 2 wires, no question". There is nothing obvious about this setup!!! But obviously the electrician got in the "habit" of just never marking white wires ever, and this is the result.

By the way, marking is mandatory. Marking for different kinds of hot (black red yellow) is entirely optional. For all Code cares, they could all be black. I disagree, sincerely: I own 11 different colors of THHN wire, all #12 stranded. Taste the rainbow!

Which of these wires doesn't belong?

Speaking of colors, I note a brown wire in there. Nope. Nope. Nope. That is thermostat or doorbell wire, and it does not belong with the others. I gather you're bumping this junction box out to a 3-gang box. Make sure to install a divider to separate the low voltage in the 3rd gang from the mains voltage in the first 2 gangs. You cannot mix low voltage and mains wires.

Most plastic box makers offer some sort of divider; however I'm a big fan of steel boxes because they will dissipate arcing heat instead of burning through. You can get dividers for some of those too.

I don't know how you removed the old box, but you will need to disconnect the wires so the cables can properly enter the new box on a cable clamp. That wire marking will really pay off!

from your description it sounds ok. the two blacks on the common could go to two lamps on the stairs...