What's the best way to fix an exterior door that won't close all the way? Currently it closes ~99%, but I have to push the door to make it fully shut. The deadbolt won't easily slide in or out, and often catches.

That is - the 'neutral' sitting position of the door is just a bit short of being actually flush. This means to open or close the deadbolt I have to push or pull on the door to make it flush, then move the deadbolt.

On this particular door I installed a set of Door Armor - which seems like obvious culprit. Part of the set goes on the lock side - extra metal brackets that wrap around the latch and deadbolt. This actually seems fine - I had to chisel down a notch in the door so the metal would fit flush and nothing stuck out. But that is done. The other part of the set is metal plates that fit inbetween the hinges. The idea is to spread out the weight of a blow against the door. But the hinges now have a noticible gap from the metal plate being wedged between them. 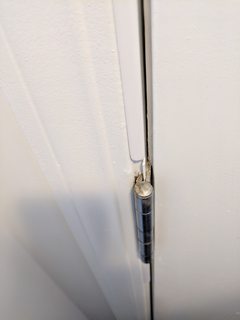 middle hinge (link to full size pic) - has the metal plate installed. This forces space between the hinges. Terrible idea? Obvious reason why this door would never sit flush? 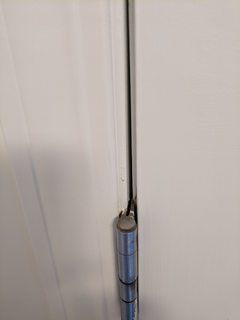 top hinge (link to full size pic) - no metal plate here. The plates on the bottom and middle hinges force the top hinge to have this gap. Is that bad?

Seems like this metal gap is the obvious problem, and I may have to just get rid of it? I want to see if there is anything else I can try, as it would be nice to have the reinforced door.

I have tried researching and making several adjustments to fix the door and make it flush, but no luck.

Any suggestions? Or what am I not understanding about how doors hang that would make this not sit flush?

In both pictures it appears that the hinges, on the door side, are not fully mortised. I can't tell from the pictures whether this is because the door edge was not properly mortised for the hinges being used, or because the hinge screws are loose.

The hinges should be completely flush with the door edge and they are not. This is causing the gap between the hinges to be too narrow for the Door Guard Hinge Plate to fit without putting stress on the assembly. Try pulling the door and chiseling the hinge areas on the door edge such that the hinges are flush like they should be, I think that will solve your problem.

It's hard to tell exactly what's wrong with the hinges from a static picture, but you'll probably see them moving slightly as you close the door.

If the door touches the frame, it will force the hinge to move so it can close - and there's something like 50:1 leverage, so relatively gentle pressure on the door handle can compress wood or bend screws.

Watch how the hinges move, and adjust the hinge recesses so that they don't. This might mean cutting them deeper, or packing them out (with cardboard, plastic card, sheet metal or wood)

3
How can I fix an exterior door that is hard to close?
4
How do I fix a door that's sticking closed?
1
How to adjust hinges on interior doors?
1
Replaced door hinges and now the door won't close - hits the door stop on the hinge side
0
Door not flush to door stop at the top but is at the bottom
3
Our door won't close, is it a sagging door or a misplaced strike plate?
6
Exterior Door hits Jamb
0
Where to put front facing shed door hinges