I have an exterior door that won't close easily because the top 1/3 of the door hits/rubs against the door jamb. To close the door, I can either use my shoulder for a strong impact, or lift up on the door handle very hard, while pushing it closed hard.

I started with the obvious, all hinges are screwed in tight. The hinges themselves sit flush to the door, and are flush to, or slightly below, the door jamb itself.

Based on other posts here, I used a 3 foot level to check for plumb and level on the door jamb, and they are all spot on, which was surprising. The gap between the door jamb is a consistent 32 3/16" all the way from top to bottom, and the door itself is 32", or just shy.

I used the level on the door when it was as closed as can be before it hits the jamb, and it shows plumb on the level, which makes no sense.

When I force the door closed, the gap between door and frame by the top hinge is much larger than near the bottom hinge.

I took off the door trim and found it odd that the jamb is not secured to the studs on either side. I expected to see some screws and shims, but just gaps on both sides. I added some shims and longer screws to the deadbolt strike plate, so that the screws go into a stud instead of just the air.

I have read a few similar problems on here, but nothing seemed to match my situation. I feel like the door jamb must be moving, sagging, or something, but I see no movement/sag in the hinges, and everything stays level while moving the door. It's not particularly heavy, since it has a window in it. 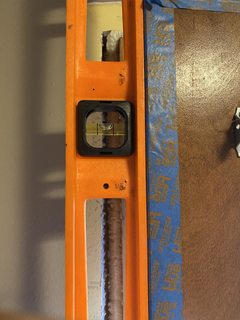 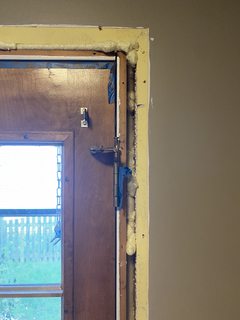 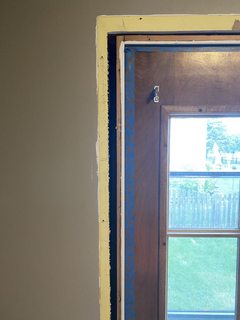 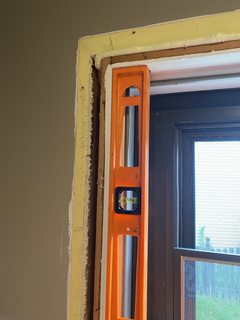 When I force the door closed, the gap between door and frame by the top hinge is much larger than near the bottom hinge.
This indicates to me that the top hinge was sprung at some point. In other words, something may have been caught in the door on the upper hinge side while closing it.
Replace the top hinge and you should be okay.
Alternatively, you might be able to bend it back into shape by removing it and placing it in a vise in the closed position and tightening the vise until the hinge plates are flush together.

I took the top hinge off and put them in a vise, but it did not appear to be bent. I shimmed behind all 3 hinges and drove 3.5" screws into the studs. I also shimmed the other side of the door jamb and secured it to the studs with long screws. After doing all of this, the door opens and closes without interference.

4
What are some tips for fixing gaps between door and jamb in an exterior door?
3
How can I fix an exterior door that is hard to close?
1
Replaced door hinges and now the door won't close - hits the door stop on the hinge side
0
Easiest fix for crooked door frame
0
Front door won't fully close or sit flush
3
Exterior Door Width is Shorter than Jamb
3
Our door won't close, is it a sagging door or a misplaced strike plate?
2
Is it preferred to set a door slab flush with the jamb face?