EDIT: the outlet is not freely moving behind the cover; I just managed to move it to the side by a fraction of a millimeter and moved it back with some effort. Also, the main question is whether what I did outlined below contributed to any sort of significant damage to the outlet.

I have an urgent question, and would appreciate any sort of help for feedback for my scenario.

I live in the U.S., and my question is about a particular power outlet. This power outlet's receptacle is inserted so that it is behind the cover of the outlet, but it still feels fairly stable.

So yesterday, I was frustrated and yanked out a phone charger from the top socket of said outlet, and realized I had shifted the receptacle/outlets behind the cover to the left by a small amount. Unsure of what to do, I plugged in a plug and used it to shift it back to position, which may or may not have been dumb to do. Now I'm afraid of the integrity of the outlet, whether or not I should use it, or if shifting the receptacle and moving it with a plug was dangerous.

Does anyone know if I should hire an electrician to fix this one outlet, or am I safe? The outlet is on the wall behind my table, which is made out of metal other than the top.

Is it possible for this one outlet to spark or cause a fire due to what I had done before (manually shifting receptacle back to place with a plug in outlet). Also, when I pulled the charger out yesterday, it was not shifted by an extreme margin, but just a little bit.

I'm not sure if it is a hazard or not, since I didn't have any problems prior to doing what I did above, but if anyone can let me know, I would appreciate it. Also, is it dangerous to be in proximity of an outlet, or if it were to spark and electrocute me via the metal table that is next to the outlet?

Main question is: Does moving the receptacle behind the cover damage anything if one were to move it accidentally or purposely with a plug, whether it be yanking it or dragging it? 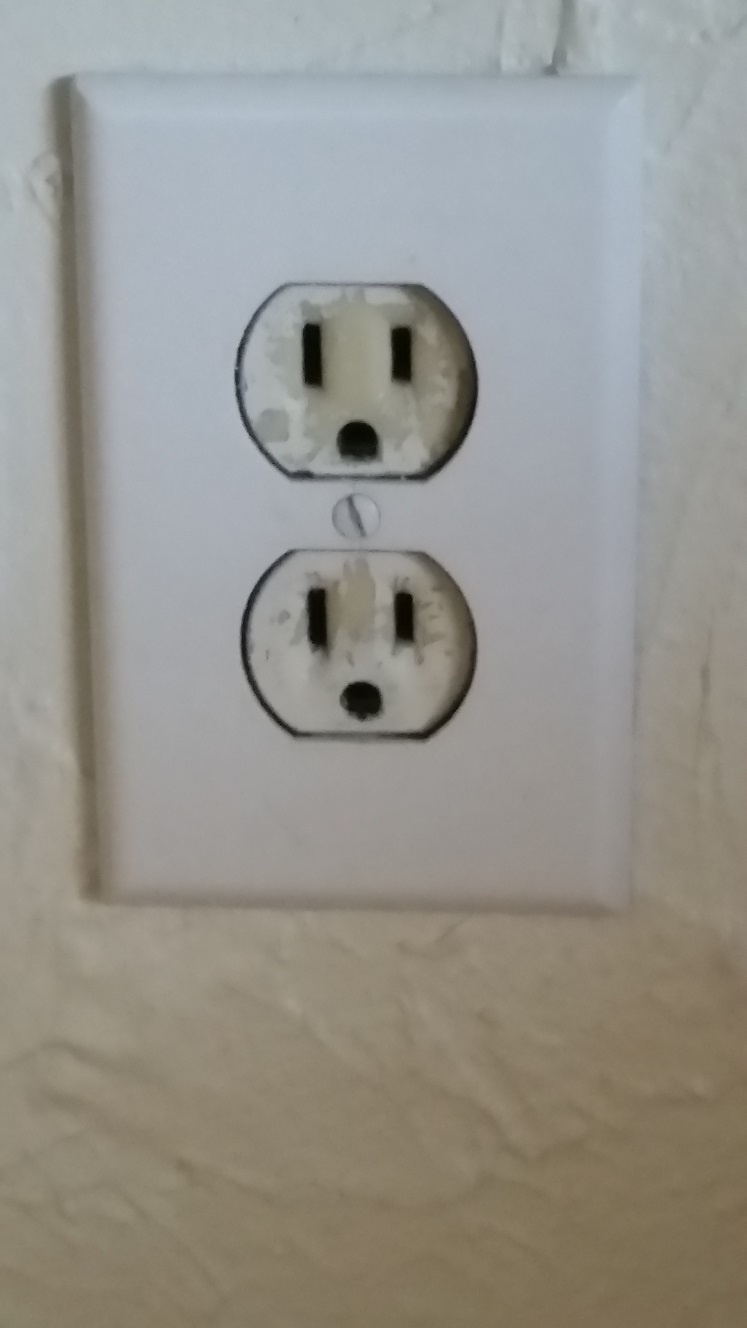 As others have already noted, a picture with the cover help will definitely help with diagnosis.

Very likely there is no "new" problem, but the "old" problem is a real concern. Normally a receptacle is attached to a box by two screws - top & bottom, and then the cover plate is attached to the receptacle by the middle screw. I see 3 likely scenarios (and there may be a combination):

Once you have the cover off, you also want to check for:

As others have noted, anytime you have doubt you should be turning off the breaker supplying power to the subject location until your doubt is removed. This is the only way to be safe.

Your question: Does moving the receptacle behind the cover damage anything if one were to move it accidentally or purposely with a plug, whether it be yanking it or dragging it?

The answer is Yes. It is yes because this is not how these things should be handled and mishandling something tends to increase the chance it gets broken.

There is a good chance nothing bad has happened because you'd probably already KNOW it; but regardless, the outlets should not move freely or if forced. Wires should not be yanked out of outlets, nor should they be plugged in halfway, pulled, or dragged.

Regardless of follow on pictures you may post as requested, the single picture you posted already shows us a no-go situation. An outlet should not be left like that, and you should not use it until you correct the situation. This is proper fire safety.

The fixes are generally easy as @manassehkatz listed a great list. The question of "should you hire an Electrician" is really up to your comfort and skill, local codes where you live, etc. You have to make that determination. Given it seems you are very unsure, you probably want to hire an electrician. The repair should be simple, but no one here wants you to take on an adventure dangerously & that you aren't comfortable with.

Like other people have said: If you have a doubt: turn the breaker off.

If the power plug is moving or can move, that is not a normal behavior, I recommend you changing this plug to another one to be sure of the quality and not the hazardous situation you have.

We can't tell you more because we can't see the back of the plug.

BEFORE YOU TRY to dismount it, turn OFF the breaker! Do not put yourself at risk. Also try to not short the socket.

You can hire an electrician, I don't know about the cost but it can be very little because it's an easy repair that doesn't need other tools than screwdrivers and multimeter (for checking if the main is present or not on the cable). But be safe!

7
Which exterior outlet cover is required by NEC?
7
Why does my laptop charger make a spark when plugged in?
3
My question is, is this a possible/valid way to add a "hidden" outlet for outside IP camera?
0
Question about putting in outlet w/ three sets of wire
1
Should I use a GFCI breaker or receptacles for my shed run?
5
What is the correct cord and plug for my forklift charger?
0
Suggestions for connecting a small UPC (battery backup) to a single receptacle/outlet that will power a wifi mesh router
3
Utilizing 10-30R Outlet for Power Tools (And making it all safe!)