I'm converting one of the rooms in my 1840 house into an office. The thing is I have 5 kids and need to be able to lock the door so I can have some level of quiet. I also don't want the kids tinkering around in there when I'm not there. (Sharp tools and stuff)

The kicker is I want it to a lock that can be opened on both sides given a key or code. The door is only about 1-1.25 inch thick of solid wood with only an iron latch.

I've been googling and have not found anything that fits the bill. I think I'm looking for a sliding bolt style lock that can be opened from either side. I'm open to other ideas too if they fit the need.

Why not consider a rim lock. This is a surface mounted lock and door latch that was typical in 19th century houses. 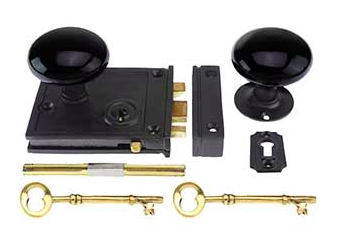 It is mounted on the inside surface and requires only two small holes drilled through the door - one for the knob spindle and one for the key.

There are old ones around, but you can find reproductions that work the same way.

Images and links are illustrative only, not an endorsement of goods or sources

I have a bathroom door which is 1 1/8 inch thick, and I managed to install a regular lock on it. (I bought the door second-hand, and didn't realize how thin it was until I took it home and compared it to my other doors.) The lock package said that the minimum thickness is 1 3/8, but I made it work - barely. I think this is the lock I used, or a very similar one.

I used a Forstner bit to drill the hole for the bolt, and then used a round file to carefully expand the hole until it fit. It was pretty close - the hole wound up being just slightly smaller than the door thickness. I also had to replace the two screws that hold the two halves of the lock together - the stock ones were too long.

Using a rim lock as the other posted suggested is probably a better option, but those can be pricey. You may be able to get away with a cheap lock from your local hardware store.

And replacing the whole door is also an option. 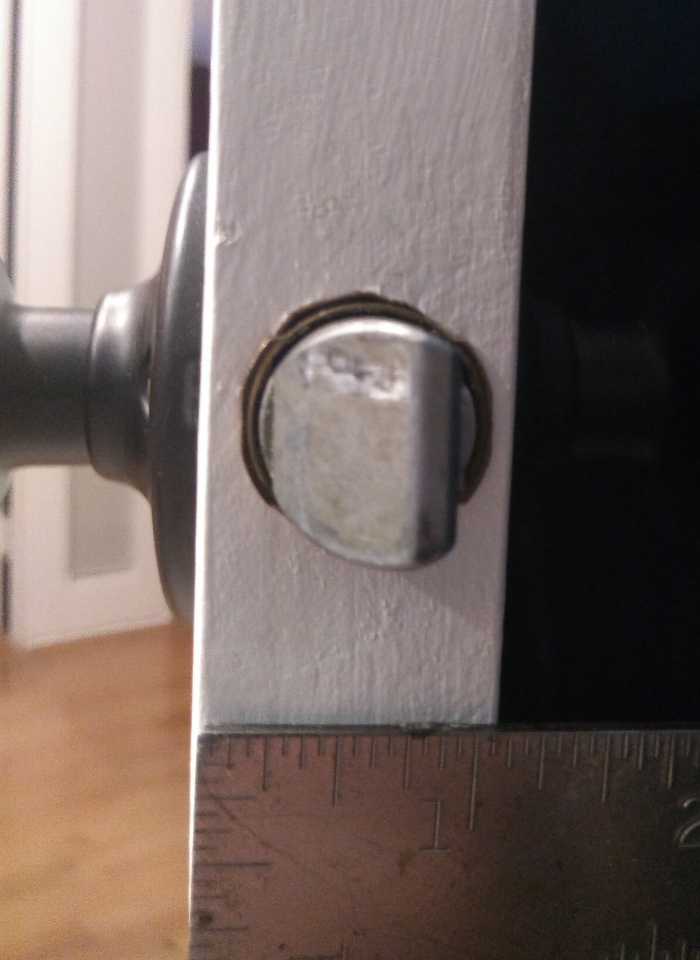 Not the answer you're looking for? Browse other questions tagged doors lock old-house or ask your own question.

1
Does the security certification of a lock relates to both bolts?
1
Fence gates with two holes for lock and handle
2
Lock type for a door on a large box
1
How can one replace a Lori branded lock that won't fit in a new door
1
Re-key a lock so it's always openable without a key
3
Door lock stuck, will NOT retract
1
Back door suddenly won't close
3
Key stuck halfway in door lock
0
How to fix free spinning thumb turn in entry door lock