How can I prevent this ice build up on my driveway/walkway?

My house faces North. I have down spouts on all four corners of the house.

My challenge is that in the late winter/ early spring, the sun melts the snow off the roof and comes down the downspouts.

On the South side of the house, it's warm enough that the water flows away, and when it doesn't there's no one walking there.

On the North side of the house, it's in the shade. When the water hits the ground/concrete of the driveway/walkway it basically freezes instantly. The North East corner is OK, because no one walks there. However, on the North west corner (where the * is in the picture below), we get a huge buildup of ice there.

The treatment so far has been mechanical (chipping ice away) and chemical (salt). As it's summer now, it's a good opportunity to fix it permanently.

I've had straight extensions on that downspout to extend the flow somewhere better, but:

I've thought about adding a catch basin or running it down the yard underground in a weeping-tile pipe. But on both cases, I'm afraid of it also becoming a block of ice as well.

Any thoughts on away around this? 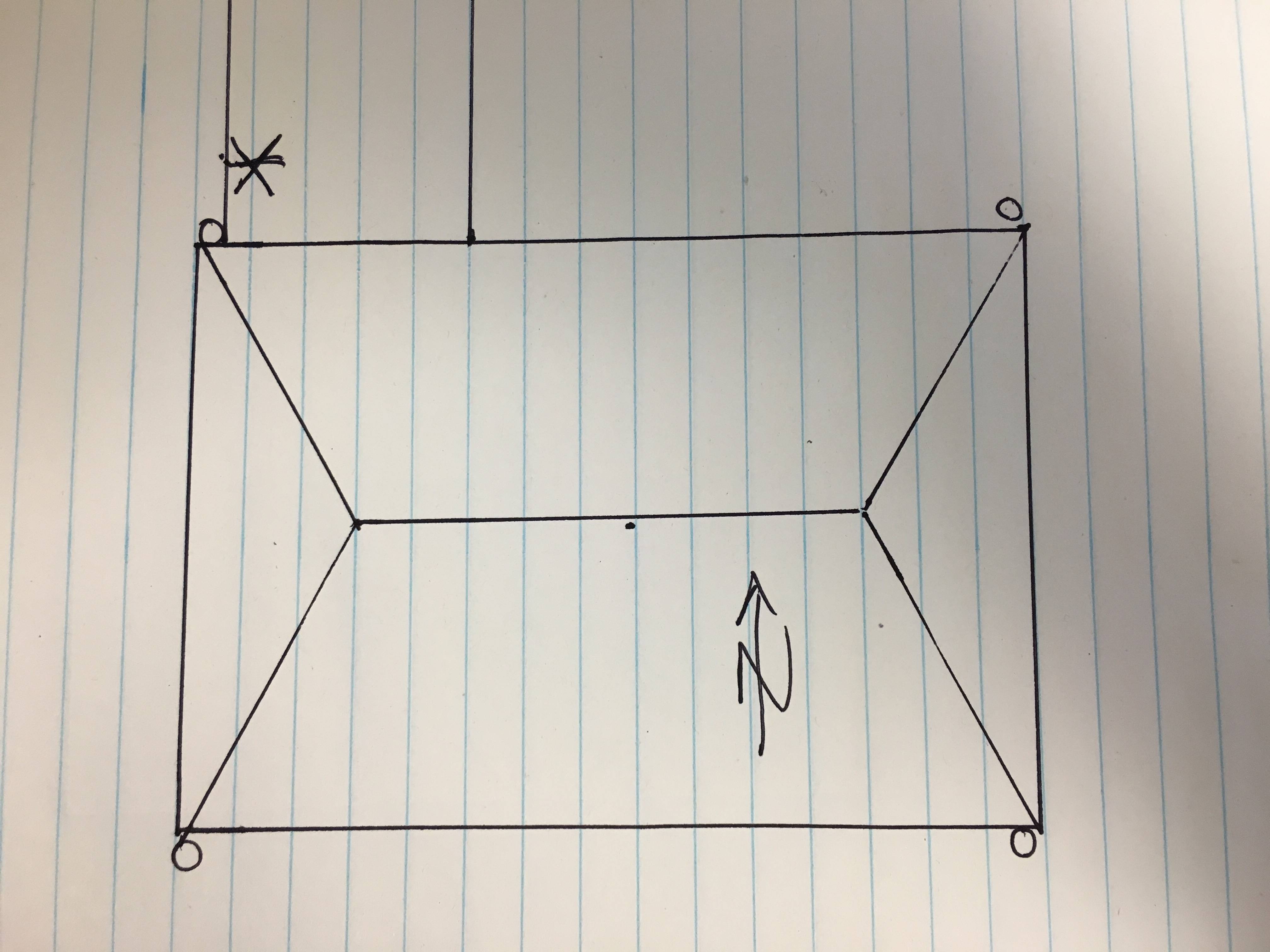 I'm not a professional, and I have very little experience. But:

Could you adjust the slope of your gutter?

Currently, rain rolls north off the roof, gets to the gutter, half goes east and half goes west. If you lower the north-east corner of the gutter (and gently slope the whole gutter toward it) a majority of the rain would head down the east spout instead of onto your driveway.

We design heating cables into driveways and sidewalks for areas that can have an icy buildup and buildings that must have safe access, like medical clinics, hospitals, fire departments, etc. Also, high-end residents will often request it.

Here’s a link for new or retrofit work: http://systems.warmquest.com/radiant-driveway-heating-systems/?gclid=CjwKCAjwxOvsBRAjEiwAuY7L8nf2UgwO6lrlQa7gdDArcySc_ugLc8oGkuY7pbjFos1TVQjG7KjHSxoCx8UQAvD_BwE

You can install it with a manual on-off switch or a thermostat to turn on automatically.

I would dig a trench to somewhere convenient, put in a drain pipe and run the downspout into that. That's probably what you mean by a "weeping-tile pipe". This works well for me out of a corner that never gets sun despite the pipe not being very deep - it runs under a patio for about 30' and is probably only about 18" under the surface.

I would suggest the cheapest in my mind would be direct your spout to the West. If your houses driveway is facing Northwest is to the left of the picture. I am answering this because I believe the spout is now facing North, correct! and I am not sure how much property you have to the west of your house. Hope this was helpful.

Not the answer you're looking for? Browse other questions tagged drainage ice winter downspout or ask your own question.

5
How do I repair/reattach downspout and gutter after snow/ice damage?
1
Should I be concerned about foundation seepage and what to do about it?
1
Will dark gutters stay ice free better than light colored gutters?
0
Clearing out blocked weeping tile
2
Damp Crawl Space
0
Are gutters the only way to fix this ice accumulation issue?
3
How should I put a gutter downspout on a corner of my house surrounded by pavement?
1
What is the 4" white pvc pipe in Pool patio concrete slab?
2
Coal room basement leak: seal the chute or fix the drainage?
0
Best way to remove winter humidity from an attached garage?