Should I be concerned about foundation seepage and what to do about it?

We recently bought a 20 yr old home next to a lake in NC.. within a couple thousand feet. It doesn't rain incredibly often here but we've noticed when it does rain it pours 2-3 times the amount we received when we lived 20 minutes from the lake. I've gone down in the crawlspace during and after a rain and notice water seeping through the foundation wall. There is no french drain system installed inside or outside the foundation wall and all of the downspouts just have those little kick plates right where they meet the ground.

Last weekend I installed a sump pump with seep basin in the lowest spot just to keep water from standing, and to prevent it from ever building up enough to reach the equipment down there (water heater, air handlers, etc) .. which from the mud lines I saw it looks like its done before. When I installed the sump basin I ran rock channels out off of every connection point so it wouldn't be terribly difficult to add an interior french drain down the road.

The land around the house is very sandy and there is a hard clay bed 3-4ft down. The house has been in these conditions for 20yrs and shows no signs of uneven settling, no cracks in any walls nor foundation, so I'm wondering how much I should worry about the water. I would at least like to tile all of the downspouts away from the house but given there is a downspout at every corner of the house (and some in the middle) and the way the house sets on the property I would have to tile pretty much all the way around the house to reach the a discharge point. I feel like if I'm going to dig all the way around the house I might as well install a french drain while I'm at it but part of me thinks most/all of the water issues I have could be solved just by getting the downspout water away from the foundation. Or should I maybe tile the downspouts away and install a french drain inside the foundation? Or.. not worry about it at all?

I had to draw a small diagram to see how the area was around the house. I drew a swale in to show what is there already, or hopefully something that can be created 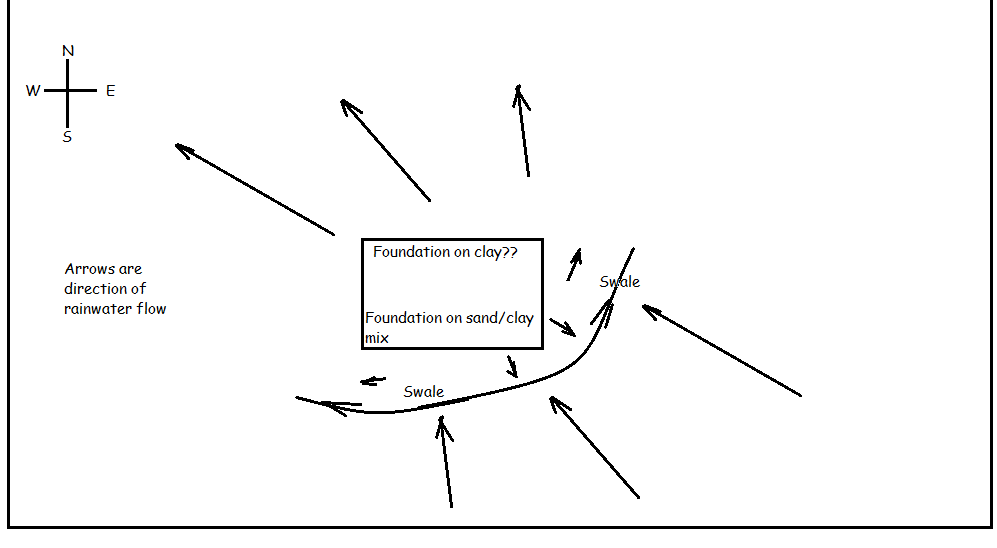 What looks troubling here is the concentration of runoff heading to the house IF there is no swale there, that is why I hope there is one there, if not you really need to get the flow away form the house. It is bad enough that it is sandy, the water can still perk into the foundation, though it will be minimized with a swale. The clay base on the north side, sounds exactly as you describe, a bowl.

You need to do whatever you can to minimize the water infiltration, to start. It may not require to pipe the downspouts away from the house to a drywell or into a French drain, well not a French drain as you may plan around the house. French drains return the water to the ground, and in turn the crawlspace. What I mean is terminating the downspouts into an in ground pipe that daylights downhill of the home. A drywell would work too, but it is much more than may be needed.

All of this is still tempered by the symptoms created by the water in the crawlspace. If there is no evidence of black marks (mildew) or white fuzzy stuff growing in places from the excess moisture in the crawlspace, if none of these symptoms exist, al least extreme measures are not needed. Regrade if needed, would be the minimum, downspouts to daylight away from the house the next active remedy, drywell addition the next, and if you are doing all that digging, waterproof the foundation, all these measures combined are the extreme I mean. 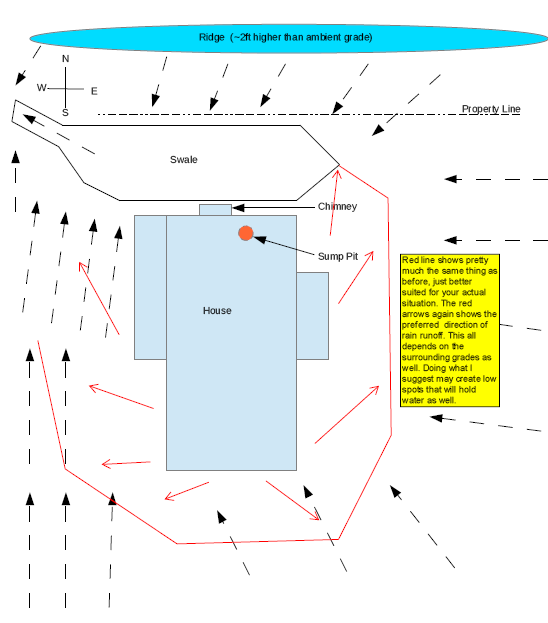 Aside from the shape of the house and other extensions from it, it shows the same thing happening except your swale that exists is more of a collection point. It appears the rain runoff takes the same path, but the house is in the way. The swale in the above sketch I posted would divert the rain water before it gets too close to your home. Is this a possibility to happen? It can be done by lowering the grade or if the house is high enough above grade, the grade can be raised, but that has implications too. The water in the swale may be of no concern. I would draw more concern to the south and west side where the rain looks like it is path is unencumbered to the foundation.

I will edit your drawing to show a more accurate idea and post it.

Back at the downspouts that I mentioned earlier, if the grade looks like it can daylight a underground lead would help reduce the amount of water at the foundation. Yet the addition of the swale will redirect the downspout water as well.

Besides the sump pump, the other easy measure you should definitely do is discharge downspout flow well away from the house. The problem is you are essentially sitting on a giant sponge in the bottom of a shallow bowl. Don't worry about trying to drain inside the foundation any more than you already have. What you really need is to prevent water from getting there in the first place. This involves a curtain drain anywhere water can come in from, possibly a complete perimeter drain is required.

I would first just redirect downspout discharge and see how things go. Keep a sharp eye out for developing mold. If problems persist, you will need to design some sort of curtain drain system. The exact details would need to be carefully considered based on you local conditions. You might want to sink some shallow monitor wells (just down to clay) to determine where the water is really coming from.

Not the answer you're looking for? Browse other questions tagged drainage sump-pump french-drain downspout or ask your own question.

2
How do I install this sump basin?
1
What can I do about water runoff that is damaging soil around my house?
1
basement sump pump water level above drain tile
1
Does a French drain need to terminate above ground?
4
What is the minimum distance from property line water can be drained?
2
Water pressure from slope causing crack and lean in foundation. Is a French drain the answer?
2
Foundation water seepage?
1
moving water away from gutter downspout
1
Downspout overwhelms French drain and water enters basement-- how to fix?
0
How far out to install French drain so water can't pass underneath it and still get into house?