How do I determine if the energy savings are worth replacing windows for?

I have a house with an east-facing wall which is mostly windows. In the winter, during the day I almost never have to run the furnace because of how much the sunlight warms my house. During the summer it's hard to keep cool for the same reason. I'm thinking of replacing most or all of the windows with highly energy efficient windows which I understand work by blocking the heat coming from the sunlight.

I'm wondering how much that will make my winter heating bills go up and if that will be offset by the savings on my electric bill for running my air conditioner in the summer. 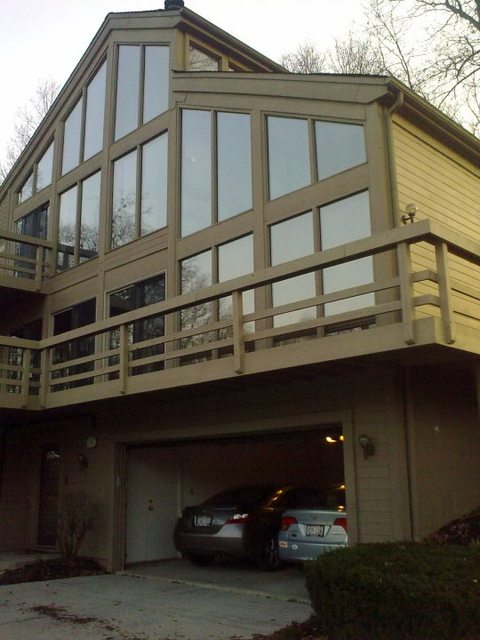 I have been told but have no first hand knowledge that the way low E windows work is the coating is somewhat directional in the sense that they reflect summer solar energy because the sun in higher in the sky.Winter solar energy is allowed to pass thru because the sun is lower compared to the horizon.A simplified explanation is it works similar to a louvered window blind that is partially opened.Because of the complexity of the formulas needed I would contact your local utility company about a free energy audit.If the windows are dual paned now it may be possible to just have the film applied to your current windows.

Right now you work hard to cool but not to heat. Probably the most efficient setup is to heat slightly more than you cool. Heating is easier to come by than cooling. Waste heat from computer, lamps, etc. is a benefit in the winter but a cost in the summer, so take advantage of it.

Plant a few deciduous trees in front of that window. In the summer they will shade; in the winter they will let light through, while still slowing the wind somewhat. Of course you'll need to wait a while for this to help.

An operable window in the top of a tall space can work pretty well in the summer, as natural convection currents do a lot of the work for you.

Look in to awnings. In the summer when the sun is higher, they will shade the windows; in the winter, the sun will get underneath the awnings and warm the house.

In general, huge glazing is beautiful, expensive, and wasteful.

The last house I owned had a similar window feature: lots of sunlight on the south and west exposures. Prior to replacing those with double paned Low-E windows, it built a lot of heat in the summer on the upper floor. This was reduced after the new windows, but it was still pretty darned hot. I don't believe that winter heating changed that much, but we are in one of the milder areas of California (Bay Area). I can't honestly say whether replacing the windows was really worth it. It felt better. :)

Based on the shapes of some of those windows in the picture, that's going to be a lot of custom windows, which could be quite expensive, too. That seems like it would make it more difficult to offset the costs.

Get a bid on what the new glass and installation will cost you and try to figure out how long it will take you get your money back. While I'm not a windows man (I use Linux) I don't know what the pro's say what percentage the change would save you. Take your gas and electric bills and take the total ( don't worry about the taxes, just leave them in for your figuring) and total them up for 1 year. Now lets say the glass and install is $5000 and your energy bill is $500. Now do the math; 500 X 1 2= 6000 X.2(this represents a 20% per month savings)= 1200. If the windows save you $1200 on a $5000 job it would take you 4 years to pay for the glass. That would be worth it. I have no idea what your energy bill are or how much the glass and install is but to me your answer is how long to pay for your investment versus how long you plan to live there.

Other things to ask is if there is a rebate from your power or gas companies, is the glass energy star, do you get a tax credit? A lot of things will tip the scale one way or the other. Good Luck!

Not the answer you're looking for? Browse other questions tagged windows energy-efficiency or ask your own question.

11
How do I add an exhaust fan to an old attic?
35
How best can I discover what is up with my electrical bill?
5
How should I landscape my yard to make my home more efficient?
0
How can we protect this furnace from environmental conditions?
0
Removable windows for the porch or sunroom
0
Do I want low-SHGC windows on the east and west sides?
5
How can I improve efficiency of my home? Geothermal not saving money
2
Will replacing windows significantly reduce solar heat gain in summer?