Rust and ash in my AC/furnace - should I be concerned?

TL;DR - Furnace/AC generates a lot of rust flakes and ash, not sure what this means.

UPDATE - An inspector came by to look at the furnace. While the inspector didn't find anything broken, he said it was nearing its end of days, and that it was only a matter of time until something broke. As per his recommendation, my apartment complex replaced the unit.

I live in an apartment unit that's 34 years old, and I'm a little concerned about the state of my furnace and AC unit. I don't know exactly when it unit was installed, but it seems to be showing its age. I noticed an excessive amount of rust flakes and, now that the gas heater is flexing its muscles for the cold this season, some ash. I honestly don't know much about HVAC systems in general, so I took some pictures. Is the condition of my system any cause for concern? 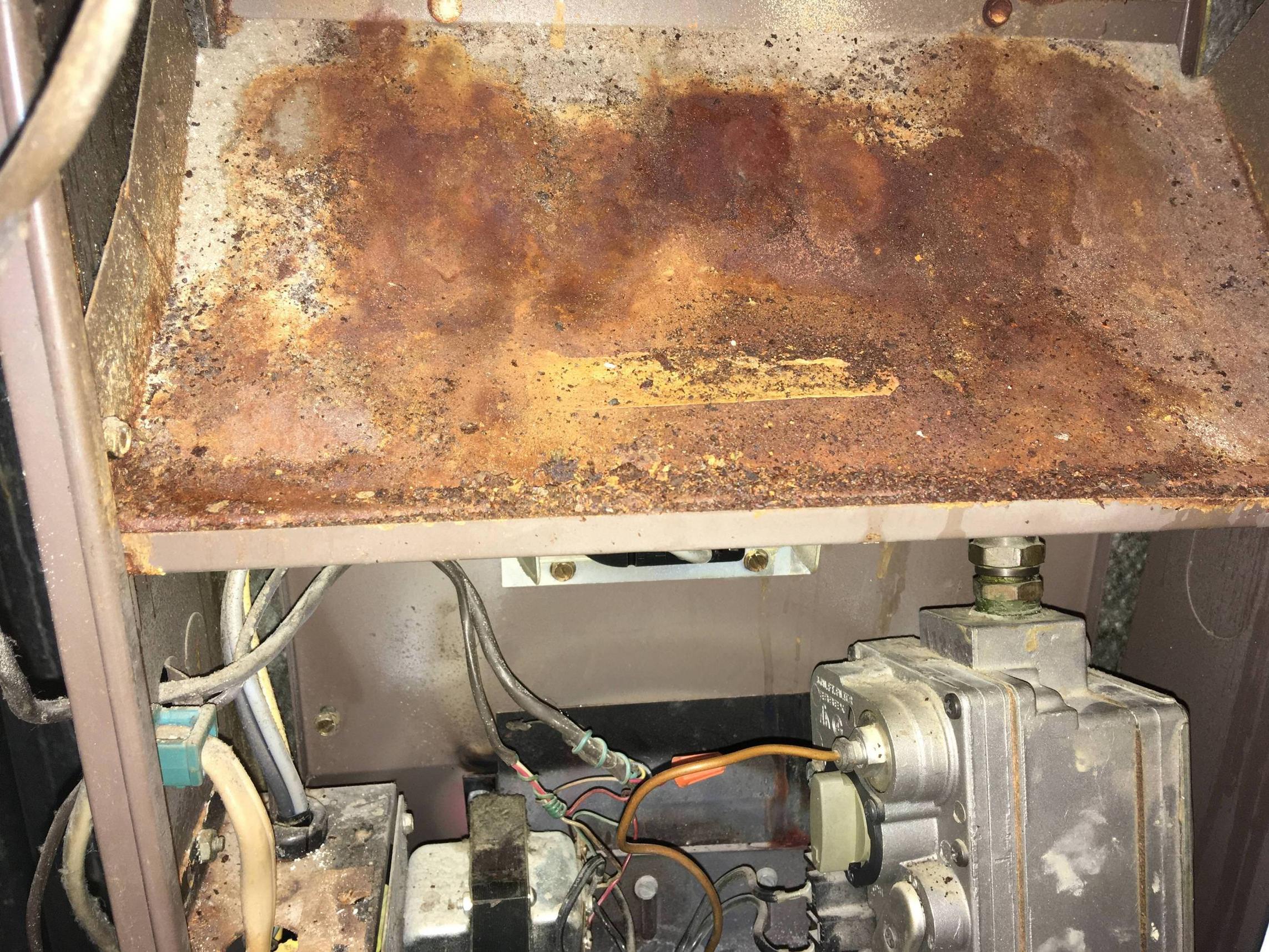 This is where most of the rust would pile up. I have cleaned most of it off. Before I did, it would simply drop to the ledge and floor below. 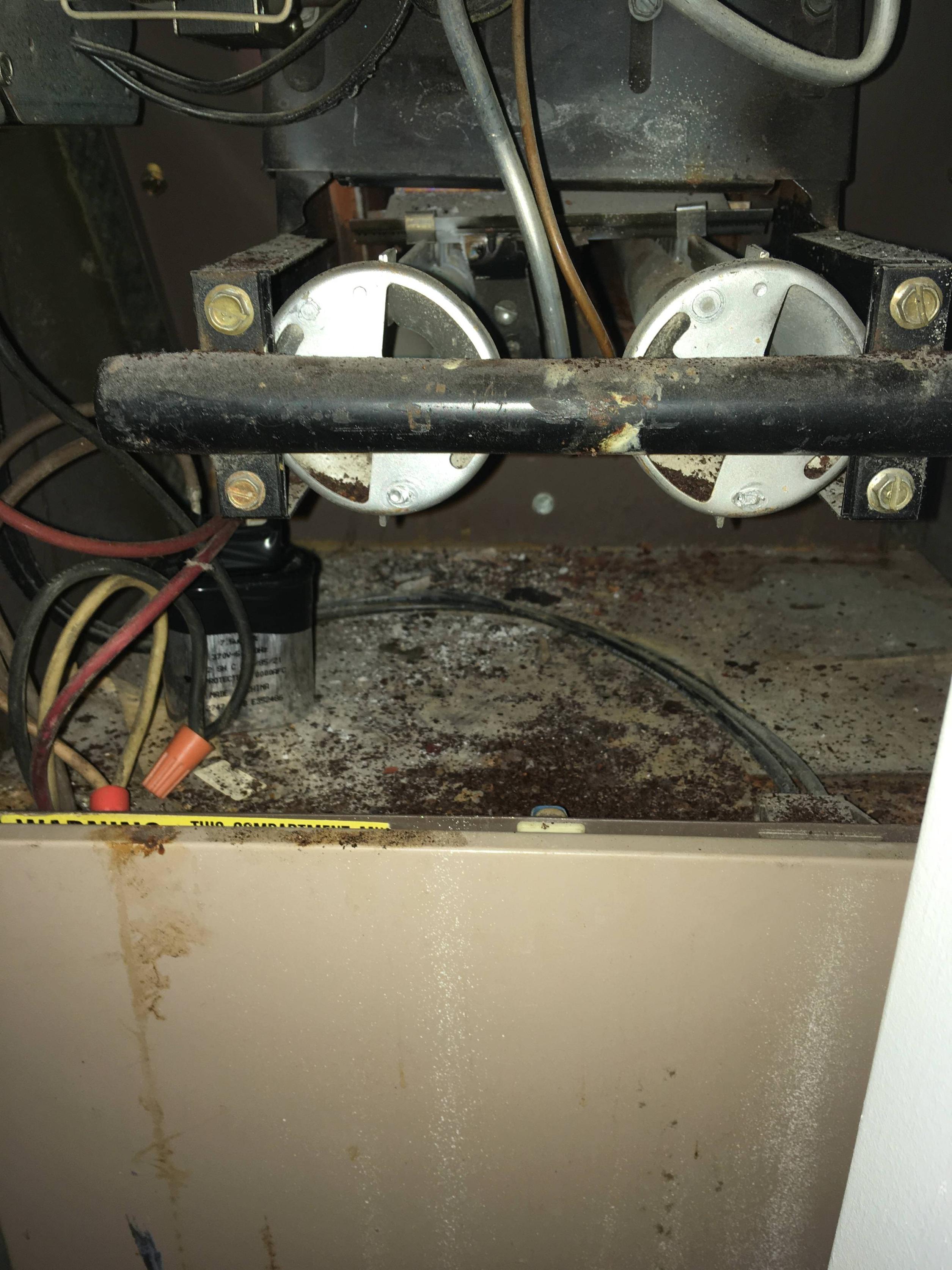 This is underneath the rusty ledge, looking at the burners. You can see some of the rust that fell from above, as well as some ash from near the pilot light. 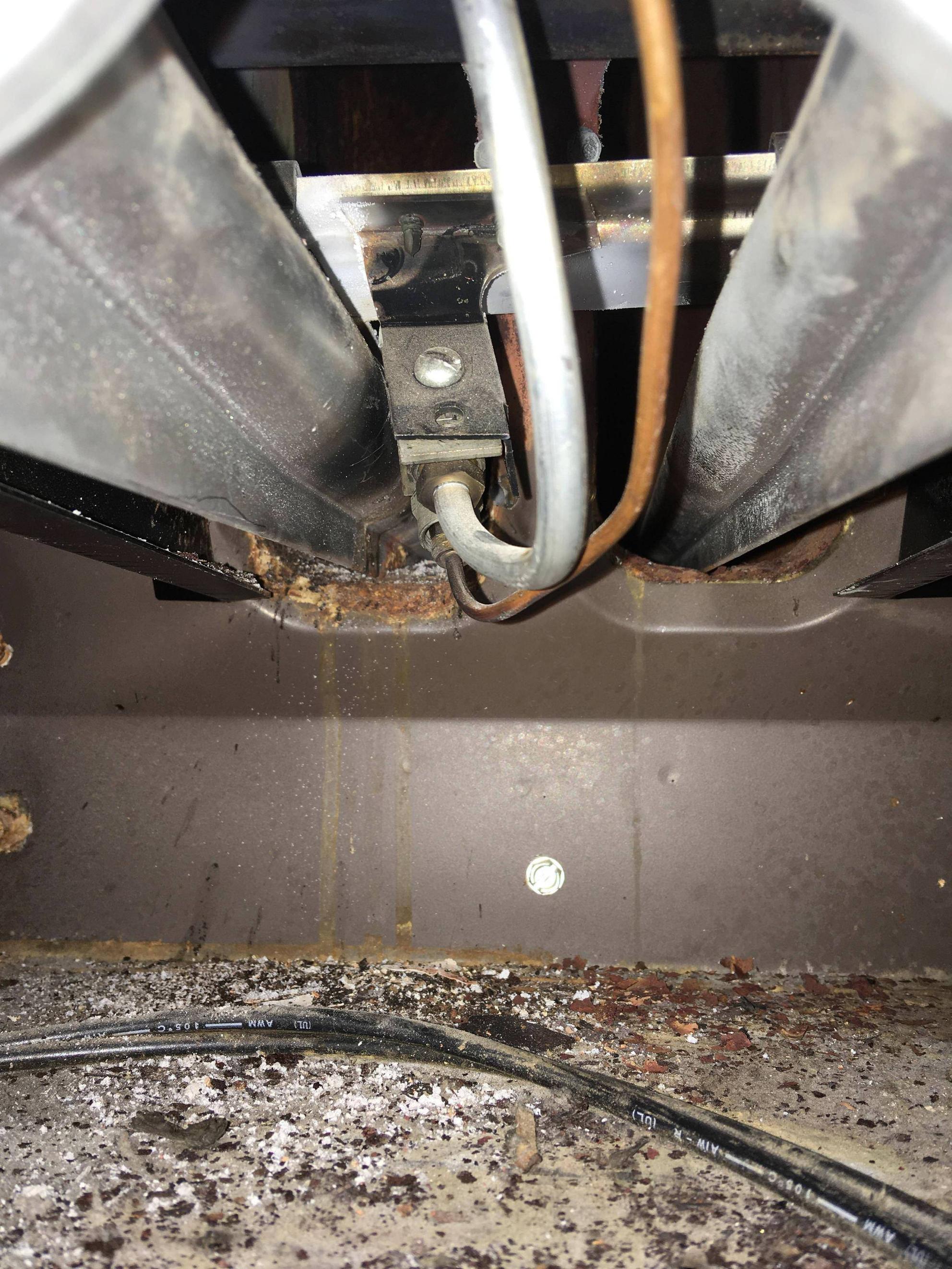 A closer view of the pilot light, showing the rust flakes and ash piling up below. The ash was not present before this season when the heat kicked in. 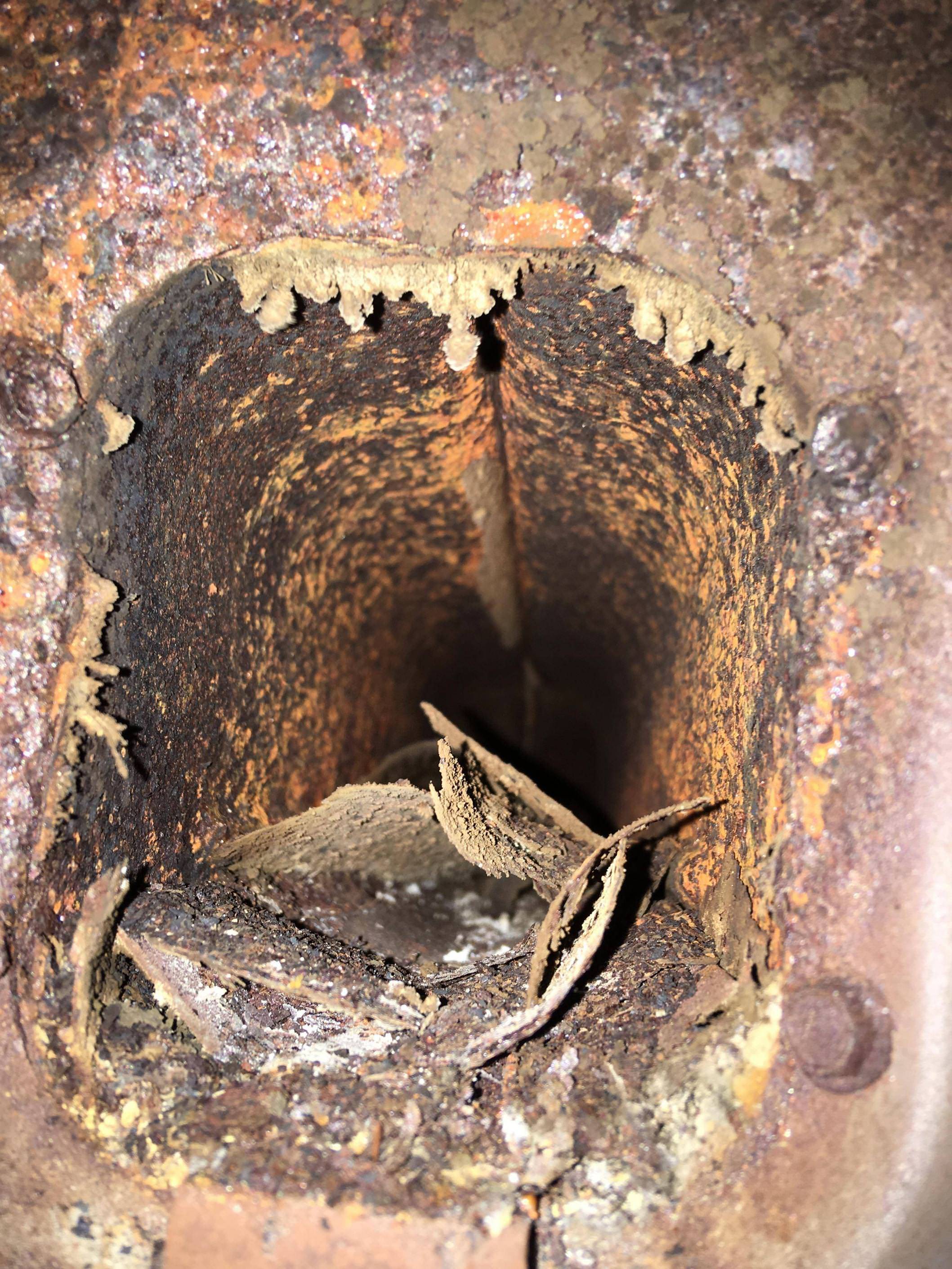 Underneath the rusty "hood" in the first image, there are two holes where it seemed most of the rust would fall from. It was a little difficult to get a good picture of these holes, so please excuse the poor camera work on my part. This is the left one. I'm not sure what the larger bits once were, but they don't look or feel like metal or rust. My guess is that at some point this hole was partially covered by some material that fell apart through the years. 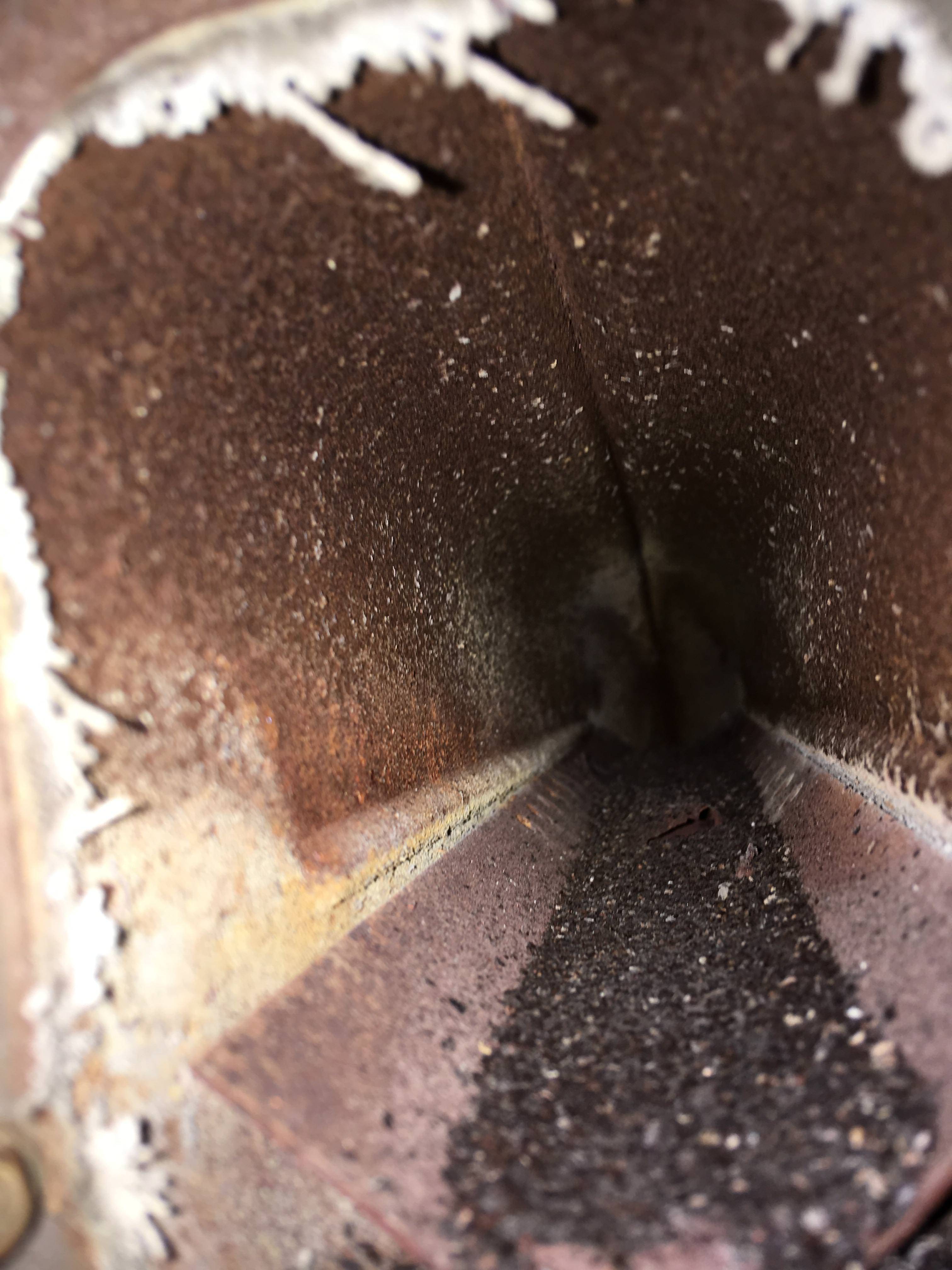 The right hole didn't have the same non-metallic flaky bits, but did show a good amount of rust flakes sitting inside. I'm not entirely sure what these holes are for, but again, I'm not very familiar with these systems. It seems like a majority of the rust comes from these holes and drops onto the rusty "hood" (first picture). I lightly brushed my finger along the outer rim of the hole and rust eagerly fell out. 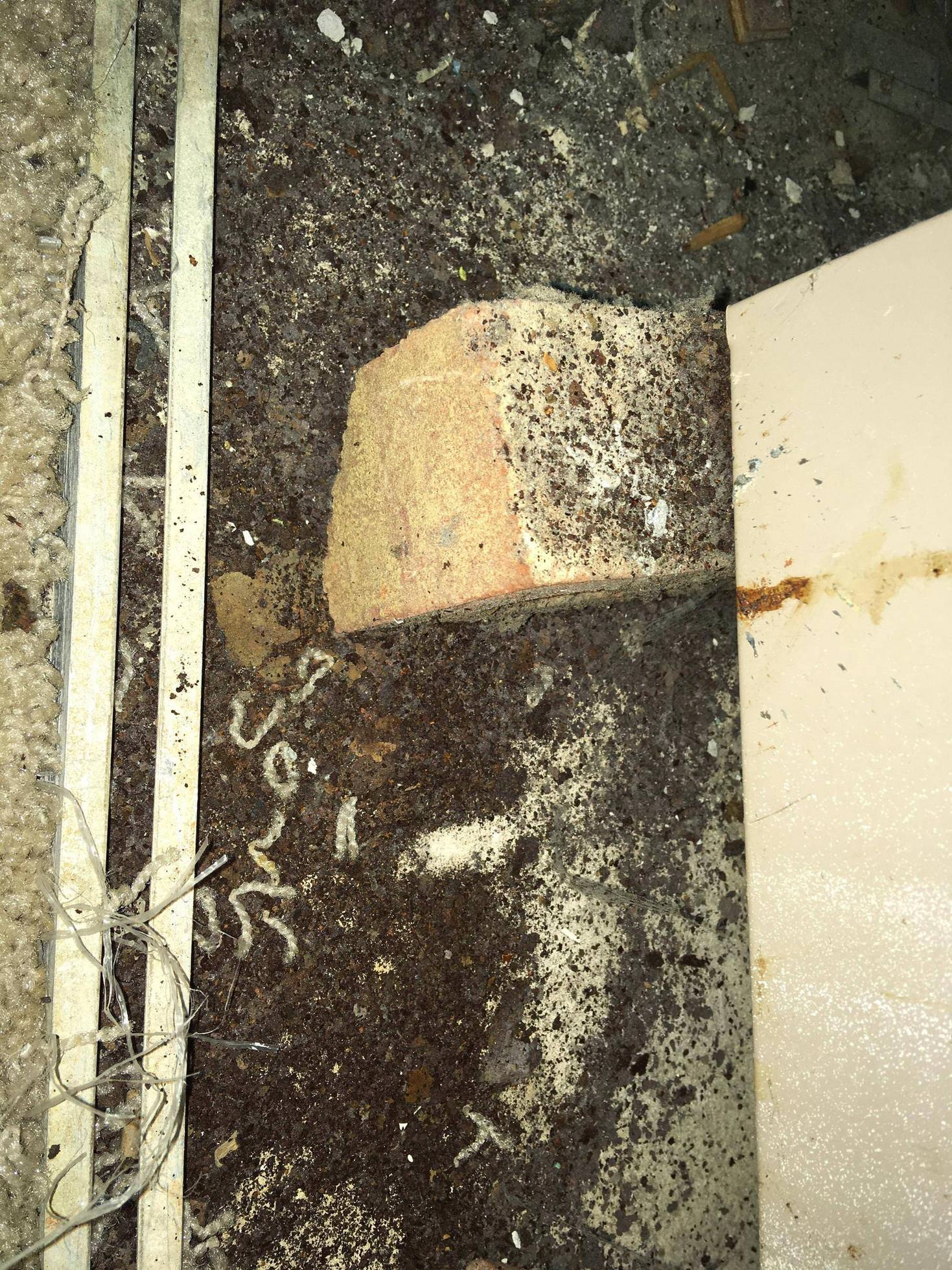 This last picture is of the floor below the unit. You can see a small section where I dragged my finger through the rust that had piled up. I doubt this picture is very relevant, but I included it to give a scope of how messy this system is.

I know this is a long post, so thank you for reading it through. My question is, should I be concerned about the excessive amount of rust accumulating through this system? As far as I'm aware, the furnace and AC work alright apart from being noisy and inefficient.

I would talk to your landlord to ask them to inspect your furnace/AC for the year and let them make the determination.

When I do something like this with my landlord, I remind them that making sure things are right will save them from a catastrophe, possibly in the near future. And yes, I do say it something similar to that. I hold back only enough to let them feel as if the decision is theirs. I also make valid statements about things should work, vs how it currently is working, even if I have to research that info first (like you are doing).

If your landlord is honest, and not a slumlord, you have a good chance to get at least some work done to it, if not replaced. Most furnaces are designed to last around 20 years, so it's a good chance it's been replaced sometime in those 34 years since the building was built. It may simply need a good cleaning and some basic maintenance.

Furnaces usually smell of burnt rust and dust when they first come on for the season. If that odor continues past the first week of steady use, then it's not normal, in my experience.

Again, letting your landlord make the decision will make you sound like less of a jerk tenant (or worse) and more of a concerned person who knows what you/they're talking about. Just because you got your information of the Interwebs doesn't have to mean anything to them. ;-)

Simply making them away of a situation before it becomes a problem will, eventually and hopefully, will get you on their good side. I find that useful, myself.

It looks like the drain is clogged or the drain pan leaking on your AC condenser coil which is usually directly above the furnace burners. Humidity in the air condenses on the condenser coil and drips into a pan that drains the condensate to the sewer. Water that is supposed to go to a drain is overflowing and going into your furnace. The ash is just is just further rust oxidation from the additional heat/moisture of the furnace burners operating.

First off, let me add my 2 cents; a water droplet will never short out a thermocouple and on this type of furnace, wind movement outside will not effect the pilot flame due to the furnace's construction. Air movement from the furnace fan will effect the pilot. If you look at the 3rd. to last picture, the furnace chamber looks to be compromised, with a small crack shown on the right side of the picture at the 4:00 o'clock position. I would have a furnace company inspect the integrity of the chamber to make sure it is not compromised.The rust in the burner chamber could also be caused by a poor burning gas flame, poor chimney or flue draw, plugged or leaking A/C condensate drain pan, or any number of things. I am not there so I can't say what is causing the rusting. A small amount of scale in this type of furnace is normal. this is why they need yearly service. Hope this helps.

I think the engineering term is "worn out". Nothing worth saving. I did not see the AC evaporator coil , that may worth saving. I am surprised there were not warnings about carbon monoxide although it is not a problem. I put in a gas furnace years ago, it is not "rocket science". I suggest that you don't put in a unit with too much capacity; there is likely a BTU rating somewhere on the existing unit , that is a good guide.

Not the answer you're looking for? Browse other questions tagged hvac air-conditioning furnace or ask your own question.

8
Where should my furnace filter go in a Lennox G40UHX series furnace?
1
Low voltage fuse blowing in furnace
2
Furnace runs for about 5-minutes only and shuts off
0
Is my furnace leaking water?
1
Why does my new furnace vibrate and smell like burnt oil?
1
Sticky black liquid coming from Furnace / AC Unit
1
Both reusable and disposable furnace filter?
1
Wiring for 2-stage thermostat and 2-stage furnace with single stage cooling
1
Advice on Furnace water leak, should I worry?