Why isn't the spark gap lighting the pilot on my furnace?

I've got a Carrier 58GS natural draft furnace, which has a spark gap for igniting the pilot. Unfortunately, the spark gap has not been successfully doing its job. The spark clicks away as the gas rushes past, but the fuel never ignites.

I've lit the pilot manually using a grill lighter, and once it's lit everything else works fine. If the pilot is lit manually, the furnace cycles properly. It has even cycled on/off for a whole day after being lit manually, but will not ignite when cold (not used for extended time).

This morning I noticed the thermostat was calling for heat, but the furnace was again in the shut down state. I reset the thermostat, and removed the access panel from the furnace. I let the spark gap spark for a bit, to see if it would ignite the gas on its own. After about 45 seconds of failure I gently blew on the spark, and what do you know, a flame danced into existence. The flame started off very orange as I blew, but settled to a stable blue flame quickly.

Here is a YouTube video of a similar model furnace exhibiting similar behavior. Note: My spark gap does not sound erratic, and has a steady tic-tic-tic. 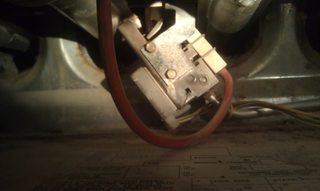 Here's the schematic for my setup: 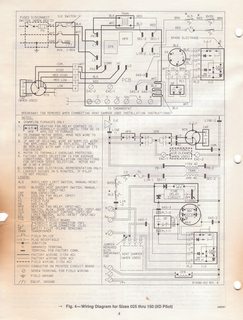 I'm assuming the furnace is original to the house, which would put the installation around 1990. Other than this issue the furnace is in good repair, so I'm not looking to replace the entire unit. I'm just baffled by what could be causing the pilot to not ignite?

I finally found some time yesterday to take a closer look at the furnace.

I started by measuring the incoming gas pressure using a gas pressure gauge. I found it to be 6 WC (inch water column), which is well within the acceptable range specified on the furnace. 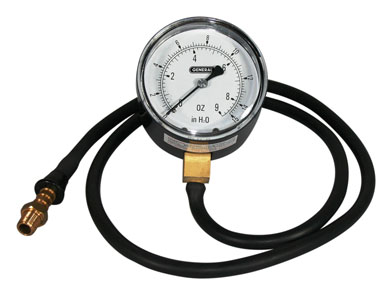 Next I took a closer look at the spark gap itself, and watched closely as the spark was generated. I even recorded the spark with my video camera, which allowed me to zoom in fairly close. This is when I noticed a bit of carbon buildup on the electrodes, and wondered if it could be that simple... 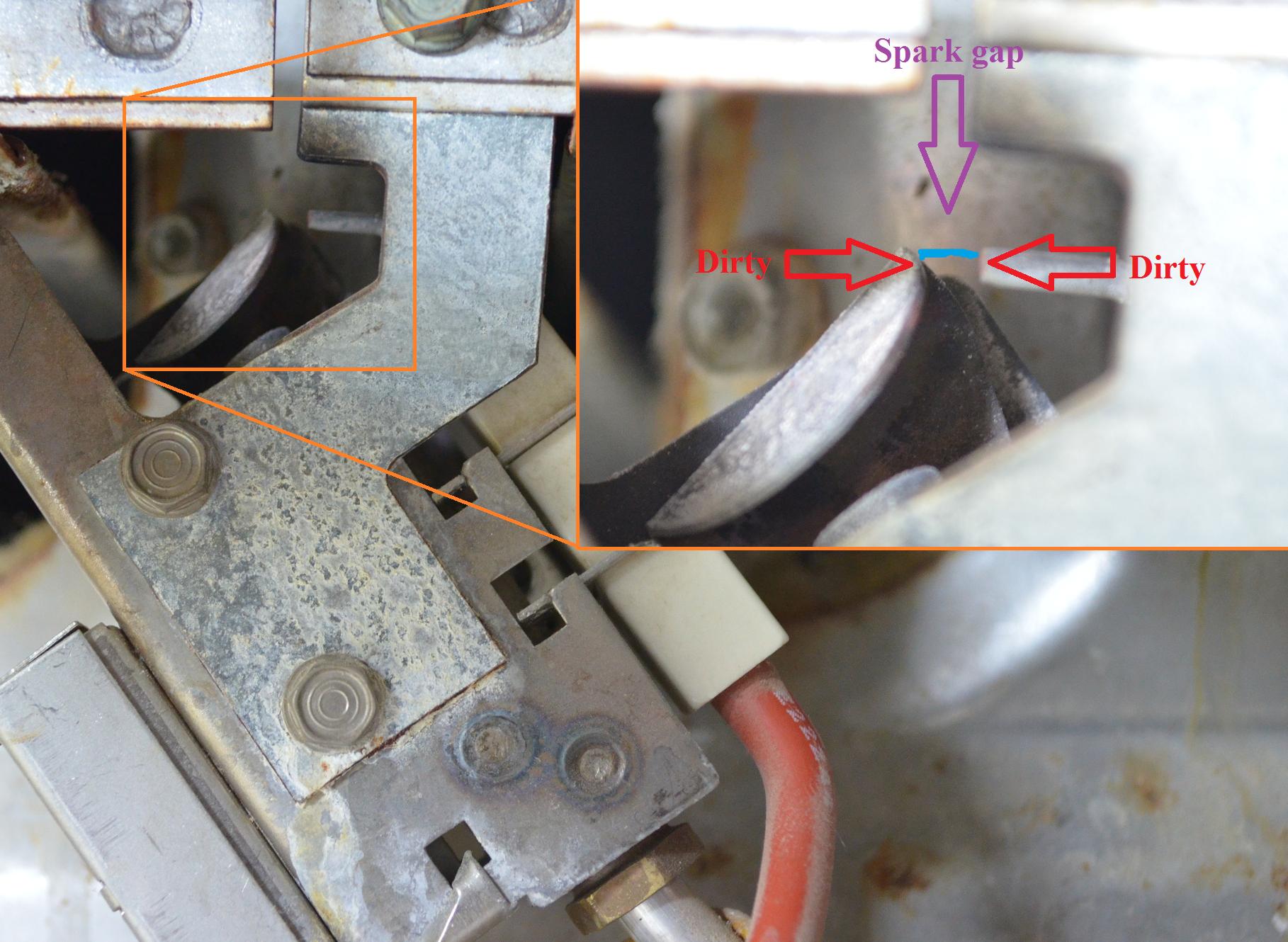 I grabbed a bit of 220 grit sandpaper, and cleaned the electrodes up a bit. steel wool is probably the tool of choice for this job, but I didn't happen to have any on hand at the moment (not yet unpacked).

After testing the pilot ignition a few times, the problem seems to be fixed. We had a cold night last night, and the furnace fired up fine all night. As I write this, the furnace has just cycled successfully yet again.

I found this YouTube video from Grayfurnaceman that describes the problem exactly, and says that the only solution is to replace the assembly. I'll be replacing the pilot assembly once the weather warms up, so we'll see if that solves the problem.

Blowing on a gas pilot or burner to get it to light generally means that gas pressure is too high or the air/fuel mixture is too rich. Most pilots don't have an air mixer because the fuel flow is so low that one is not needed, so that leaves high pressure as the problem.

Looks like sufficient gas isn't getting into the path of the ignitor. That could be be due to partial blockage of the burner hole nearest the ignitor. When was the last time you brushed off the burners, or at least blew the junk out of the burn box w a reversed vacuum cleaner? They build up crap over the course of years, which can cause problems like you're experiencing.

-While you're in there. check whether the blower motor bearings need oiling. The manufacturers sometimes hide that info on a sticker you can't see until you actually open up the furnace.

---Situation: The pilot light fails to ignite with the electronic ignition but once it is lit, the furnace is much more likely to light again and again in the near (i.e., 24 or 36 hour) future.---

Start of primmer: The likelihood of the pilot light igniting is dependent on the quantity of gas present, the fuel:air ratio, and the presence of a sufficient spark. If any three are missing the pilot light won't ignite.

The following are estimates:
1) If the pilot light (when ignited) is large enough to engulf about 3/8 inch of the thermocouple, then that is a good indicator that sufficient gas is coming out.
2) If you can hear a good tic-tic-tic, that is an indication that there is a spark present somewhere.
3) Although a nice blue color (non-yellow) flame would indicate a good fuel:air ratio, that does not mean that the fuel:air ratio was proper/ideal at the point of the spark arc. The fuel:air ratio varies by location and temperature – meaning: the (invisible) plume of unlit fuel:air that is to be ignited has different fuel:air ratios in different parts of the plume.

If you can hear the tic-tic-tic of a spark and all other of the pre-mentioned items are present and good, then it might be that the spark is not in the path of the right fuel:air mixture.

Things to know about the spark arc: The arc path will go thru the path of least resistance. Depending on its location, carbon soot can either increase or decrease the spark intensity and the “idealness” of the spark location. Because of this variability (i.e., unknown) that the carbon can present, it is best to have a generally clean surface. (Not looking for “clean” clean here but rather a “no soot, no noticeable carbon” clean.) It is important not to sand the thermocouple nor the spark electrode. They often have coatings that are resistant to oxidation. If the coating is sanded away then the part won’t last as long.

+++++++++ Some of the following presumes that the pilot light was lit either due to an act of angles ;-) or because it was manually lit.

If the pilot flame is not large enough when burning and all other conditions are good, the amount of gas coming out is insufficient. This may be caused by insufficient volume due to the setting of the valve BUT if it has been working fine in the past and if nobody has reduced the valve setting, then it is much likely to be the cause. In this case, consider that the potential cause is a blocked orifice. Consider watching YouTube videos on how to clean the orifice at the pilot light assembly.

If the pilot flame is of the wrong color (i.e., yellow), consider that the cause is the wrong fuel:air mixture or that there is debris reaching the flame.

+++++++++ Some of the following presumes that the location of the spark could be seen and that the surface of the all the ignitor components could be seen.

Sorry, I am getting very sleepy – it is quite late. Must go to sleep. Maybe I will log in again tomorrow and add more text.

Had the same issue. Spark gap was not igniting the pilot intermittently. I lived with it for a long time, manually lighting with a grill lighter if needed, then the problem got worse when the pilot would shut off the burners prematurely before coming up to temp. Hired a heater repair guy to fix the issue. He replaced the spark/pilot assembly. Had the same ignition issue after he replaced that part and he came out a second time to adjust the spark somehow...not sure what he did, but it took him about 20 mins with testing and now it appears to light right away. Haven't had enough time to see if he solved it 100%, but initial tests seem much better. This is an original 30 year old furnace...replacement parts seem expensive and it maybe time to move on to something more modern.

3
Gas furnace kicks on then off frequently