My home has a half-hot outlet connected to a dimmer switch. I have two questions about it.

First, is this a code violation?

Second, What would be better in the long term:

Some things have a dim view of being dimmed

Things other than lamps, such as motors and some electronic loads, often take a rather dim view of being connected to a dimmed receptacle. This may range from merely "not working" to "overheating and catching on fire", something you (and the NFPA) would rather not have happen. So, the 2014 NEC prohibits your current configuration in 406.15:

406.15 Dimmer-Controlled Receptacles. A receptacle supplying lighting loads shall not be connected to a dimmer unless the plug/receptacle combination is a nonstandard configuration type that is specifically listed and identified for each such unique combination.

This leaves you with two options -- either you can swap the culprit dimmer out for a switch, or you can use a special receptacle and plug to prevent non-lamps from being plugged in to the dimmed outlet.

Swapping a dimmer for a switch is a relatively easy task, at least as far as single pole configurations are concerned:

Lutron makes a plug and receptacle combination for this job -- the receptacle you need is a Lutron HDTR, and you'll have to put the matching plug on whatever lamp you plug into the dimmed receptacle, as well. 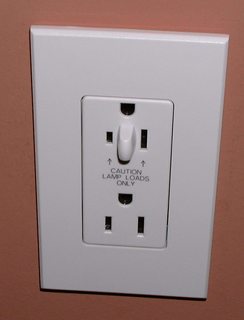 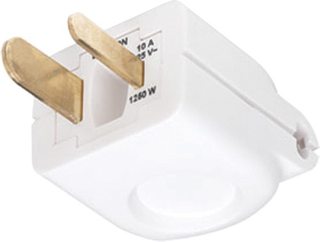 This is the costlier and slightly trickier option of the two, but may be needed if the dimmer serves other lights as well as the half-dimmed receptacle or otherwise can't be removed.

Not the answer you're looking for? Browse other questions tagged electrical receptacle dimmer-switch or ask your own question.

3
How do I change a switched outlet to a half-hot outlet?
0
How to Rewire Powered Switch Controlling Half Hot Switched Outlet to Power Outlet as Always On and Control/Power Recessed Lighting
2
Replacing a dimmer switch to a normal switch
0
Leviton Dimmer Switch Model DW1KD
2
Replace light switch connected to a power outlet with dimmer - two black wires to one black and red
1
Dimmer and switch connected to outlet to always hot
1
Having trouble with a half hot switch
1
Half Hot Outlet Tripping when Light is connected