Sudden leak from toilet after years of no problems

Large stains suddenly appeared on wall and ceiling below second story bath which is unused. No previous problems in 20 year old house, with upper bath being unused for approx last 7-8 years. Wife flushed toilet yesterday, as she does periodically, and says she thinks she did not see any water in bottom of bowl before flush filled bowl. Stains appeared less than 24 hours later. Prior flushes (weeks or more ago) had no problems. Questions: can wax ring "dry out" and suddenly leak when new water hits it; can PVC pipe joints suddenly develop leaks after long disuse; will a leaking wax ring allow water to leak below the floor or out onto the floor?? Other thoughts on cause of leak stains? Thanks, Ken

Yes, wax rings can "dry out" when it breaks down causing shrinkage, hardening, and cracking. In your case, an old(er), rarely used toilet with a dried out wax ring might have broken when someone sat on the toilet.

Leakage would also be noted around the base of the toilet though, if it's not a lot of water, may be hidden by the toilet base. If one puts his nose to the toilet base and smells sewer gas...yep...broken ring.

Note: One should periodically run water in all bathroom fixtures to ensure water in P-traps doesn't evaporate.

Removing a toilet is not difficult. Buy a new wax ring and replace the one you have. If water stains continue, move on to some other possibility.

No. There's no characteristic of PVC drain pipe that would lead to leaking after extended disuse. But you state water is run periodically; therefore, there's no real disuse...just not frequent use.

Wax doesn't dry out, but it can crack or have gaps where it doesn't form a tight seal if there is movement in the toilet. Given the toilet isn't used that isn't likely the case here.

In addition to that, there is never anything touching the wax ring except when the toilet is flushing (or if it's clogged). 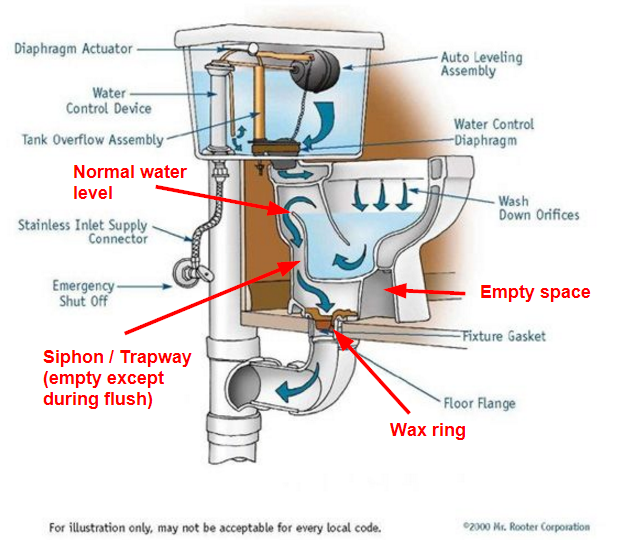 As you can see, the water sits entirely within the bowl and siphon / trapway.

Given the lack of water in the bowl, it sounds like it's possible the bowl itself has a leak, with water going into the 'empty space' and draining down into the outside of the flange.

It's also possible the drain pipe has a leak, or it's clogged, and coupled with a damanged or bad seal on the wax ring it's overflowing into the surrounding floor area.

Definitely next step is to remove the toilet to inspect the flange, condition of the floor, and possibly spot leaks in the toilet bowl.

If you see signs of water damage around the outside of the flange, it's a good indicator there is a leak and that's where water is coming from.

If you don't see anything on the floor, then I'd probably next try pouring water down the flange and see if it is clogged or if new water stains appear, indicating a leak in the pipe. If there is one it means taking off drywall from underneath to fix it. Of course if you already intend to do this to repair the water stains, you can do it now and make the diagnosis faster.