Is there a more visually discreet alternative to a range hood?

Is there a more visually discreet alternative to a range hood for ventilation? Maybe a system in the wall that sucks in odors, etc? 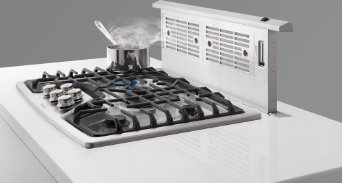 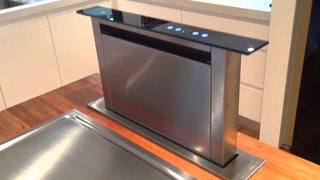 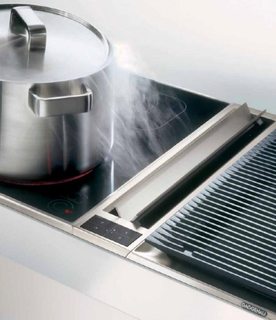 I am planning a vent near the cooktop with an inline fan on a 6" duct under the floor running to the outside.

This especially makes more sense when you have an island kitchen with the cooktop and high ceilings. Then you don't have some monstrosity hanging from the ceiling.

It wouldn't be as effective but an extractor fan mounted near the cooker would be one way to do this (either in an outside wall or the ceiling) . I did this myself in a rather awkward kitchen with an interior window over the hob, and it was certainly better than nothing despite not being as near the hob as I would have liked. You need to consider the air inlet position as well if you do this - it should be the other side of the source of steam/odour.

If you can put up with a cupboard over the cooker, there are almost completely concealed cooker hoods,including recirculating models. This might be tricky to arrange if you've got an island cooker, but then an extractor in the ceiling might be a good idea.

"Down Draft" ranges and cooktops exist. They of course still require appropriate venting but it can be hidden.

Different styles suck the air down into the cooktop or have a small retractable vent that pops up when in use.

Some people say they work great and others say they are useless. I suspect its largely dependent on the type of cooking you are doing. I imagine if you are frequently dealing with high heat (and thus a larger amount of smoke) or really smelly food, then they won't work as well but for your basic boiling water or low heat cooking it will work really well. IMO, they probably would work as well as any non-commercial hood would normally work.

Not the answer you're looking for? Browse other questions tagged range hood or ask your own question.

0
What can I do about circuit boards on a new range hood that stopped working in a week or more?
3
range hood with an offset
1
how deep must a range hood be to effectively clear cooking vapor?
0
capping off range hood wires
0
range hood confusion
1
PVC for range hood ventilation
1
Will this ductwork for my range hood work?
3
Is my range hood re-circulation or extraction?