How to make paint stick to a stud screw?

Around my house, I have a places on my walls where the paint has fallen off of stud screws. They are not popped screws. Rather, they are still depressed into the wall, so I don't know how why this happening. This time around, how should I prepare the wall so that my paint sticks onto the screw for a longer time? I have access to both spackle and joint compound, but I don't know which one to use. I use Behr Premium Ultra paint, which is self-priming. 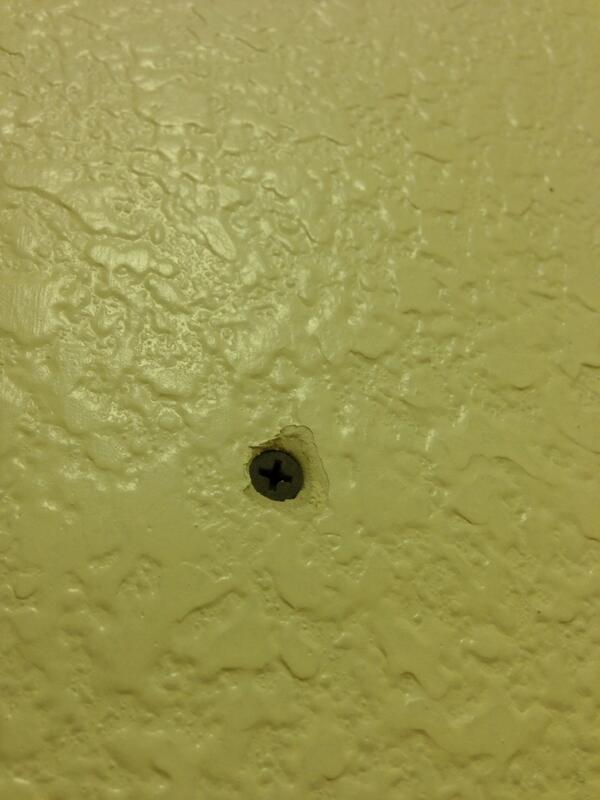 These types of screws have been used for decades with no rust issue created by the drywall mud. I don't mean to step on any toes, my apologies, but there has never been an issue with mud popping off screw heads in my experience from rust. There is no sign of rust on the screw head, nor rust "bleed" on the drywall. Although I have seen it happen in extreme cases, BUT the mud was still intact.

The picture you have looks like the screw is just so barely past the outer paper layer. I see the paint layer, the texture layer and the "roll" of the paper as the screw drew in, it looks a little much, so be careful how deep the screws are set, or you will have the same problem again, only now 3 screws. By the way, good pic, it shows good detail.

With the textured surface on the wall, a little latex caulk can be carefully placed over the screw head and the excess wiped off with a damp sponge or cloth, leaving the rest of the surface around the screw original. Let that dry, say a couple of hours or longer, it will shrink, and maybe apply a second coat to build it up a little more. Cleaning around it may be tedious, but it should result in a surface after painting that will blend in well enough to make the issue disappear.

Touch up the paint only at the spots repaired with a small brush. You have a paint that has a sheen to it and to use a wide brush or roller will show up different in the paint. Small brush, touch up ONLY the dry caulk. Or maybe you will be lucky and the way the paint goes on will not be a concern. But in my experience, the paint will "flash" (not the same sheen) where the new paint meets the old. If it is flat paint this will not happen.

The problem is that the screw heads corrode from moisture in the plaster†. This corrosion pushes the plaster away resulting in a small crater where the plaster has been pushed out.

You should use a suitable metal primer on the screw head before filling the hole and repainting the plaster surface. You can get metal primer that can be applied to already corroded metal.

These are called 'drywall screws'.

Not the answer you're looking for? Browse other questions tagged drywall painting screws studs or ask your own question.

5
How should I handle old wallpaper over top of lead paint?
0
What is the best way to prepare walls, windows and baseboard for re-painting
0
How to avoid nailheads in stud behind plaster?
2
How can I preserve paint and brushes between projects?
0
Does this wall have any more studs?
0
Classy way to hide unused low voltage cut outs or should I just drywall over and paint?
1
Drywall repair with cut wall studs
0
Primer Bulls Eye 123 is peeling off newly flattened walls with AG joint compound
2
How to fix black gloss paint bleed on brilliant white eggshell walls + paint stripped from walls