What are the possible ways to prevent heating pipes in an entryway from freezing?

I live in Maine, and it can get cold in the winter. My house has baseboard hot water heating and three heating zones (basement, first floor, and second floor). We have a mudroom/entry room that I believe was added to the house after it was originally built - it has many windows and cools easily. It also has a long heating register, which is on the first floor zone.

The thermostat for the first floor zone is well-located in a central spot. Typically, all works well. When most of the first floor is kept at a comfy 68 or so, the mudroom is probably in the mid or upper 40s.

A problem has arisen, however, with the installation of a wood stove on our first floor. The stove works well and can heat the whole house. However, when it is operating, it raises the inside temp enough so that the baseboard heat doesn't come on. The problem is that if it is sufficiently cold outside, the temperature out in the mudroom can drop into the low 30s (or potentially lower if I don't keep a careful eye on it). I obviously don't want this to happen because i don't want the pipes that supply the register in the mudroom to freeze.

What suggestions do you have that might address this problem?

Some ideas I've had are:

You might want to consider trace heating, using heating cable. 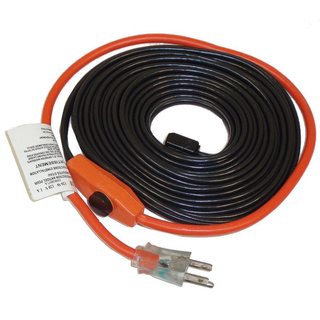 There are lots of different brands available with built-in and add-on thermostats, plug attached or hardwired. Simply install the cable following the manufacturers instructions, set the thermostat, and stop worrying about frozen pipes. Most cables are designed to work with both metal and plastic pipes, so it's a fairly versatile solution.

I would add a thermostat set for 35-38 degrees for the zone. It's not likely to run very often, but would be the surest way to head off frozen pipes. Keep in mind that the baseboard, being on the outside wall, and probably below windows, will be in the coolest spot in the room when you choose your thermostat setpoint.

If you have all the heat your need from the woodstove, you might also consider whether you can use a small fan to move some heat into the mudroom.

I know you posted this quite a while ago, but here's a very simple solution that no one mentioned. You don't need another zone or extra thermostat. Just add an extra aquastat, a simple, strap-on, single action type. Install it in the mudroom and strap it to the hot water pipe right next to the baseboard. Connect it directly to the circulator, in parallel with the other connections. set it for, say, 40 or 50 degrees or so. Now, when the pipe temperature drops below 40 degrees in the mudroom, the aquastat will turn on the circulator, and hot water (very hot water) will flow into the pipe keeping it from freezing. It will turn off quickly. This will be very efficient as you won't have to wait till the the room gets warm. You'll get just enough heat to keep the pipes from freezing, only when you need it. The installation couldn't be simpler. No plumbing. Just have to run one wire. I have a forced air hydronic heating system with hot water coils in my air handler in my attic. I have exactly this arrangement to help keep the pipes from freezing if the heat fails or is accidentally turned off in the winter.

There is a product made specifically for this problem. It is called ThermGuard and is a tiny microcomputer that attaches to your thermostat. It is programmable to run the heat zone for a specific number of minutes with a programmable delay.

For instance, you can program it to run for 3 minutes every two hours. This will circulate enough water to keep the pipes from freezing. Anti-freeze can be dangerous to your domestic water supply as it is connected to the boiler system to keep the water at pressure. If the anti-backflow device fails you will have poison in the drinking water. Anti-freeze also corrodes the components in the boiler system.

The ThermGuard device has non-volatile memory so it keeps your settings even when switched off. When the weather is not threatening, you just turn the unit off. Turning it back on restores all your programmed settings.

I have 3 in my house because I use a wood stove to heat in Montana. I have had my pipes burst twice...once when I wasn't home and it flooded the basement.

When it is very cold and you are heating with your wood stove, turn on the water circulation pump from your main furnace. This will ensure water is always circulating even though the main furnace is not running. You may need a bypass switch to the current aquastat for this to work. Good luck

I wired a switch in parallel that allows me to run the ciculator independent of the thermostat. I turn the switch on when the weather drops below 32 degs to ensure the leg that runs in a crawlspace does not freeze. This is a one zone system. I could attaching a thermostat and eliminate the need to manually turn on the switch, but this has worked well for a few years and it is the equivalent electricity of an 80 watt light bulb. I have mixed CI radiators and baseboards and when the pump is on 100%, the system heat balance is also improved.

Not the answer you're looking for? Browse other questions tagged heating pipe freezing or ask your own question.

1
Why won't the heat shut off in one zone?
1
How can I purge air from a baseboard heating system with the spigots on the wrong side?
1
Why are my water/radiator pipes whistling when I shut down the heating system?
0
is my baseboard heating unit malfunctioning
0
Winterizing pipes for weekend house in upstate NY
1
House warm thermostat off