How can I wire an exhaust fan to turn on from multiple locations?

I just bought a Panasonic FV-20NLF1 inline bath exhaust fan that I planned to used to exhaust 2 different bathrooms. I want each bathroom light switch to control the fan, so when the lighting turns on in either bathroom, the fan will go on. If both light switches are off, the fan will go off. If one light is on the fan will stay on. Could someone share how I could accomplish this, ideally in a diagram?

I don't think it's possible to individually control two different lights while controlling a common fan using conventional house wiring devices. Powering the fan will backfeed power to the other light that was supposed to stay off. But I look forward to being proven wrong.

It can be done if both lights and the fan all go on at the same time. This is just a standard 3-way switch circuit. Alternately, wire two standard switches in parallel so one bath user would not accidentally turn off the light for the other. This can be confusing as one switch may not always turn off the lights.

To have only one light go on with a particular switch, you need a pair of single throw-double pole switches where one pole of each switch goes to it's associated light and the other pole of each switch both go to the fan. While such a switch is common in electronics, I don't know if such a device is available for house wiring.

Alternately, a double pole relay could be used to switch the fan. Either pole powers the fan, but the separate coils keep each circuit isolated from the other. Sorry I'm not illustrating this, I need to take some time to learn how to add drawings here, I know it's fairly easy. In the mean time, if anyone gets what I'm saying, feel free to add some illustrations.

You have one option that you could consider. Leave the existing single pole switches to control the lights in each of the two areas but remove fan wiring from these two switches. Then add a 3-way wiring setup and two switches, one at each location, to control the fan interdependent of the lights. This of course would wire the fans up using conventional 3-way switches and the two wiring travellers running between the switch locations.

This approach as a distinct advantage of allowing the use of low cost readily available components with which to implement the solution. Standard 3-way switches, electrical boxes and multi-conductor wiring is available at most hardware stores and home centers. If installed correctly it will meet your local electrical code and regulations.

A second option that you have is to add a pair of relays driven one each from the two lighting circuits. The relays would have coils sensitive to the AC line voltage applicable to your area. Each coil would be wired in parallel (across) the light fixtures. The output contacts of the two relays would be wired in parallel to the ventilation fan so that either light on would relay over to the fan so it would be on.

One difficulty with this approach is procuring the suitable components and then installing and packaging the solution in a safe and legal manner following all applicable electrical codes and regulations.

If you were to want to attempt to go with this relay approach I would suggest that you deploy some industrial style solid state relays that are designed to accept a wide range AC input and capable of driving the vent fan. One possible component that could be used, as pictured below, can be mounted inside the bottom of a larger metal electrical box, two side by side, and then wired appropriately. This style of component has isolated mounting holes to facilitate mounting to the electrical box and convenient screw terminals for wiring up to the lighting and fan circuits. 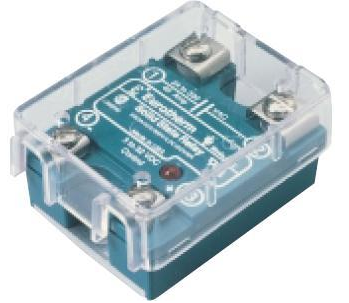 Here is the distributor that could supply the above pictured component.

I had this problem a while back - simple, use a two gang 2-way switch and wire the fan up as if it was a 2-way lighting circuit, one switch controls the fan, the other controls the light - no backfeed, fans operate when needed (client will have no automatic control however, unless you install a flush PIR in between switch and fan) Dont forget your 3-pole isolator switch however!

There are two approaches to this problem:

Not the answer you're looking for? Browse other questions tagged electrical bathroom wiring exhaust-fan or ask your own question.

0
wiring a single bathroom fan servicing 2 rooms in the master bathroom suite with 2 separate switches on the same circuit as well as lighting
0
Two countdown timers connected to one inline fan — Does it work?

1
Should I use inline bathroom fans?
2
can i use an inline exhaust to vent a kitchen and bathroom?
0
Is it legal (or green) to have an unswitched bath exhaust fan with nightlight that runs 24/7?
1
Bathroom exhaust fan turn on with light or independent switch
0
How to wire two light switches, two lights, and one duct exhaust fan so lights work independently but fan works on either switch?
2
Need Wiring diagram to Help Rewiring a Bedroom and Bathroom to prepare for smart home system
0
Old bathroom exhaust fan replacement
0
Two countdown timers connected to one inline fan — Does it work?