Toilet does not flush, pressure is non-existant, it worked when first installed, what's up?

We have an American Standard toilet (I'm not sure of the exact model, but it looks something like that Champion 4). When first installed, it worked great and it was indeed a one flush device. Beautiful it helped greatly.

Now the water goes through, but there is nearly zero pressure so the rest doesn't go through without a plunger...

I'm thinking that this type of toilet has additional pipes that allow the flush to function. i.e. the water doesn't just pour in the bowl, I think it is poured through another pipe and that pipe may have some residue in it prevent the normal flush functionality.

I've been looking for information about that toilet mechanism and I'm probably really bad at searching for it... Do you have any details on how to properly clean such a toilet pipes? Do you have an schematic that would show us how the pipes are actually laid out?

Here is a picture from the side: 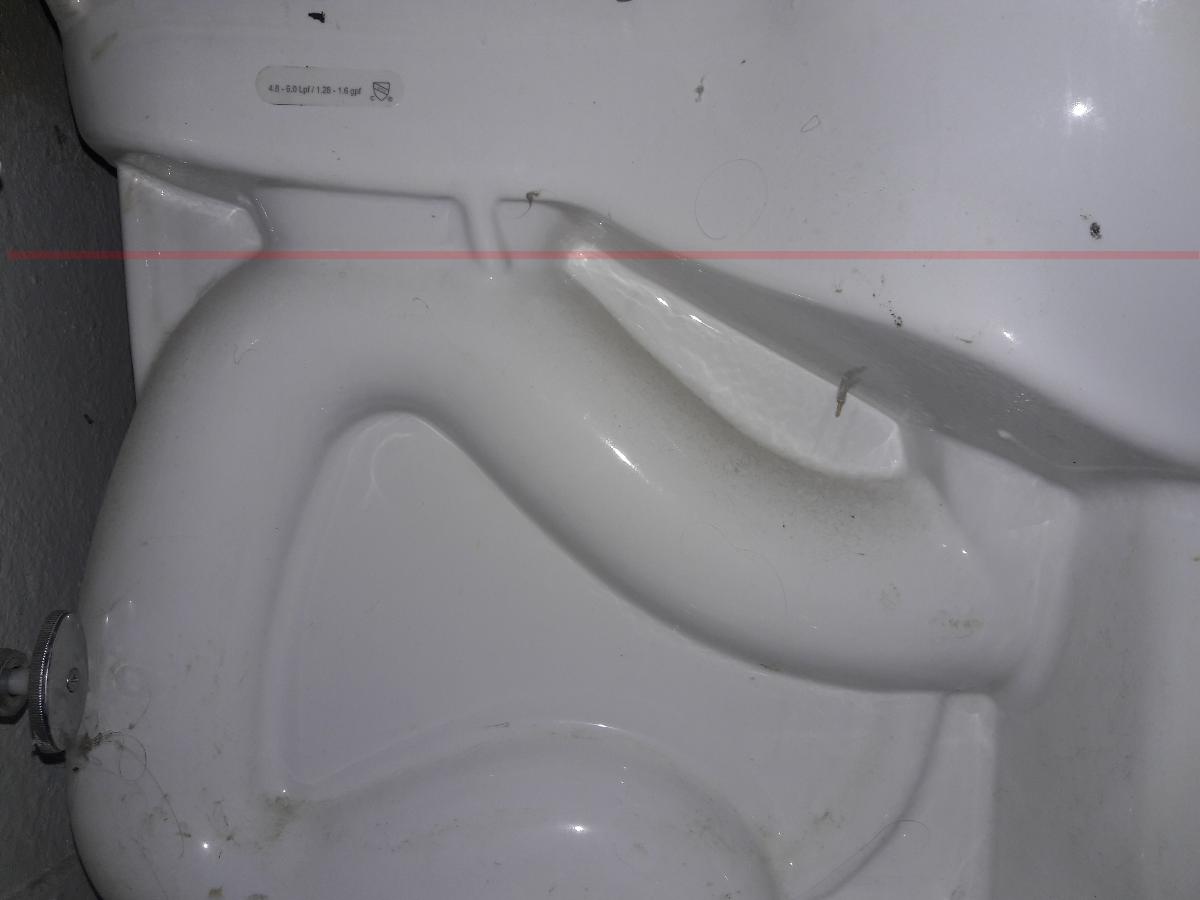 In the picture, I added a red line which represents the top of the waterline in the bowl.

As we can see on this picture, there could be a pipe between the water taken and the flushing pipe coming from the bowl (just over the red line toward the left side of the picture).

Also there seem to be a small pipe between the larger pipe just under the bowl and the one going to the ground.

All of that makes me think that there could be debris clogging those pipes.

Just in case, I had a plumber come by and he was not able to fix it. He checked the pipes and they're clean, the water flows as expected, no clogging down there. So that's the toilet which has a problem. It was also snaked, but that's probably old technology on a modern toilet which doesn't help...

As per the answer below, I got muriatic acid and ran the process once to see if it would clean the toilet. In my case, just once was enough to get the toilet to flush like normal again! I needed a funnel, though, because the flushing mechanism is such that I just couldn't reach the hole without pouring the acid all over the place. So I bought a 3 set and I duck-taped the wide one (red) to the long one (blue) for the perfect funnel.

Given all of the steps you have already done I would go the cheapest and most effective route. Get a couple gallons of muriatic acid (big box).

Pour about a 1/5th of the container down the tank drain - directly. Let it sit 3-4 hours. Flush and repeat as many times as you can. You need ventilation in the room, you will not be able to use the room at ALL during this process, and this will effectively destroy anything blocking any "holes/drains" in your toilet. I have effectively spent $5-10 and restored 50+ toilets to like new condition using this method, some not draining at all.

Wear gloves and goggles and wash off anything that gets on your right away. Do not leave these containers around small children.

Not the answer you're looking for? Browse other questions tagged toilet water-pressure clog or ask your own question.

4
Why will my toilet not flush after it rains or when ground is wet
0
Why won't my toilet flush right? Did our plumbers not put something back right?
1
Why does my toilet not leave enough water in the bowl after flushing?
3
How should I clean under the narrow toilet rim to restore full flush power?
1
Toilet repeatedly clogs - is putting toilet bowl cleaner in the toilet's tank causing the problem?
2
Why would turning on/off hot water when the toilet is flushing cause the tankless pressure relief valve to release water?
1
Causes for toilets to self-flush due to water pressure issues