How to scribe a circle in the ground...without access to the middle point?

I want to mark the ground with spray paint and wooden stakes in a nice 25 ft radius circle. The simple way would be to drive a narrow stake in the ground at the center point, tie a 25 ft string to it, and drive the stakes anywhere the string is pulled out.

Is there some other simple means of drawing the circle, without having access to the center?

No, center point isn't accessible...there is stuff in the way...I'm going to move that stuff later, when I can rent the equipment.

I'd prefer the circle be fairly accurate, about as accurate I could get had I used a center string...maybe within a 1/4 (?) of accuracy.

You don't have a centre point, but you can have a perimeter grid marked.

In its simplest form, the equation of a circle is derived from Pythagoras' theorem.

That shows a centre point with + and - coordinates. But if you use tape measures to mark out a square around your rock pile (or a 50 feet line marked at 1 ft intervals) you can then plot the coordinates of the circle from the perimeter square rather than the centre.

So if P is 13,15 on the diagram, you'll count 10 marks down from the top and measure 12 ft in from that point on the right-hand side. Then join the dots. For an even smoother circle, plot one section of circumference (corresponding to approx 1 ft square) even more accurately on a template and move that between the marked dots on the ground. ......

If the ground is perfectly level, then you don't need access to the middle of the circle, you just some point directly above it, and then a longer string traces the shape of a cone as you draw your circle.

As you said that you need more precision than having a person just stand on the rocks and hold the string, you will need build some sort of structure to hold the end of your string stable above the rocks.

In the second case, the pole needs to be really stiff, and the string securely fastened to the pole, or you're not going to end up with a perfect circle.

"Stand back I'm going to try maths" (misquoted from xkcd)

This polar plot defines a circle of radius 25 centred at the point (25,0) 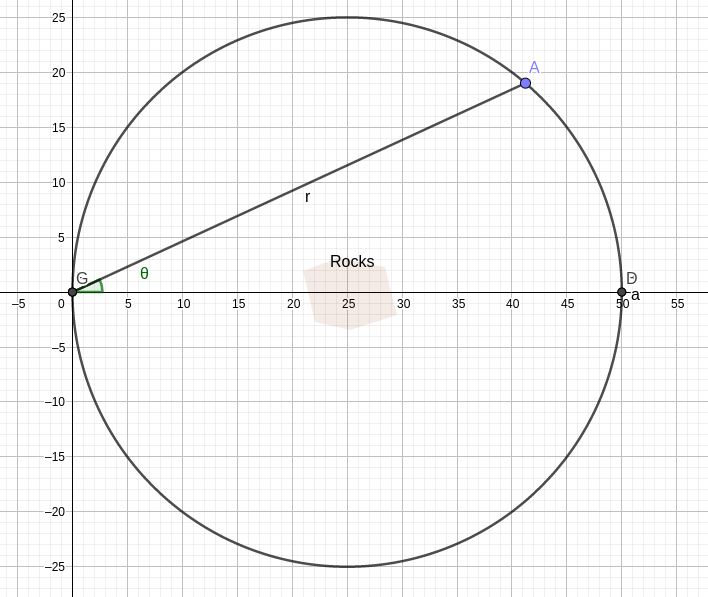 This assumes that you can set up one point "G" 25 feet from the assumed centre of the rocks. Measure the angle θ and calculate r = 50×cos(θ). Measure that distance from the G in the direction of the angle and put a marker "A" down. Repeat for angles between +90 and -90. The pattern of markers will be a circle. You do need an initial point set up, but you only need to estimate one point

Alternately, if you can set up a diameter you can use the theorem that the angle on a diameter is a right angle. 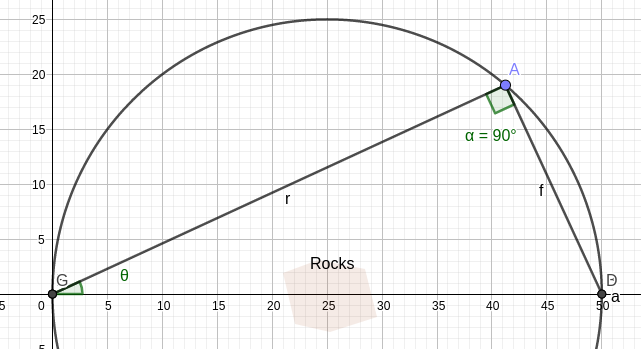 If you have a diameter GD, choose point A so that the angle GAD is a right angle. The points so formed are a semicircle. This doesn't require any calculations, but you do need a diameter of 50 feet to get started. The total length of the rope (GA + AD) will vary around the circle (from barely over 50' near G or D to about 70' directly above the rocks). You'd probably want someone at both G and D to pay-out or pull-in the two lengths until you form the required 90° angle.

Approximate solution: Assuming it's a steady pile of rocks on a level field: use the whole pile of rocks as the center point. Take a rope, make it into a loop that has approximately the diameter of your circle (plus a bit extra) and trace out the circle. It won't be perfect, as your pile of rocks most likely doesn't have a perfectly circular cross-section, but practically, I think it would be a good compromise.

(Edit: to make the pile-of-rocks more circular, you can drive poles into the ground surrounding it.) 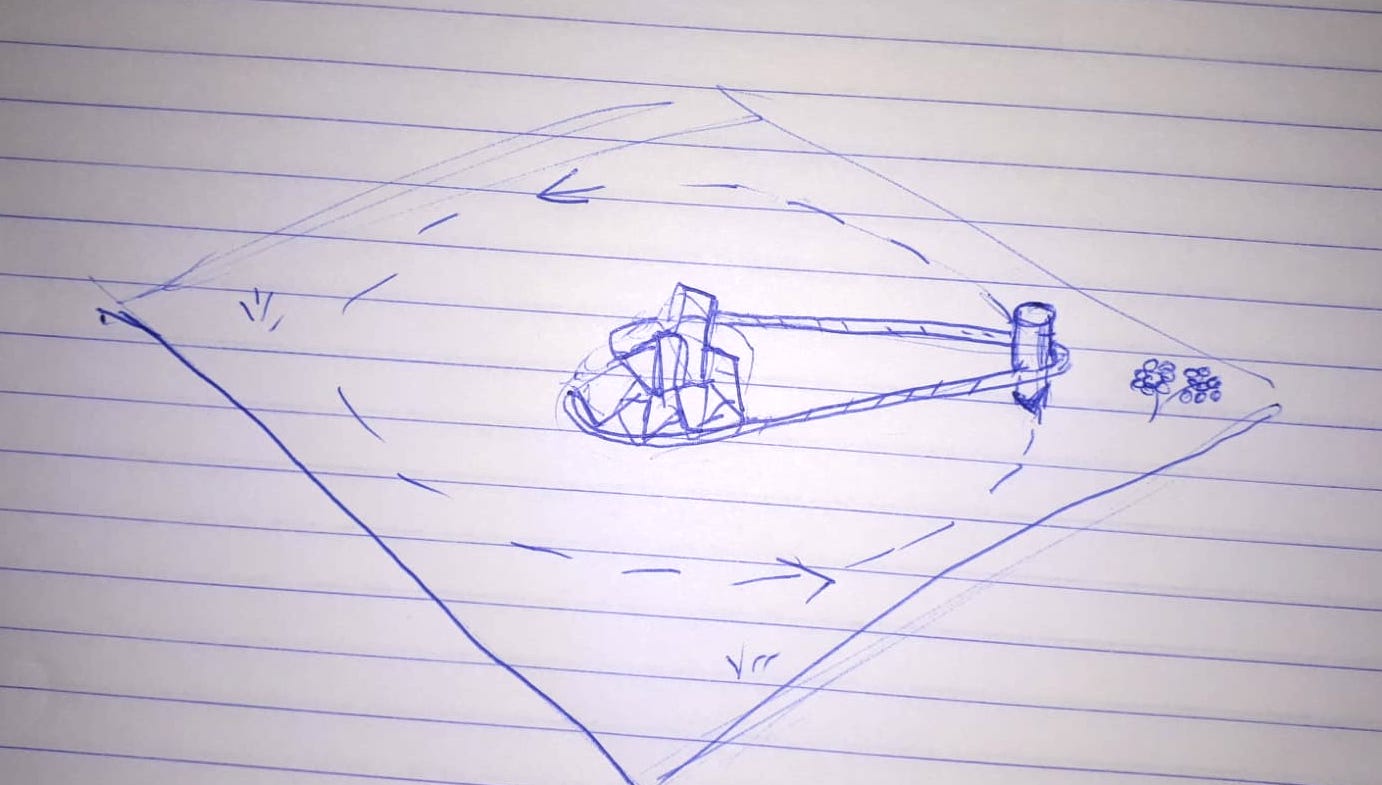 You could use GPS to do this - set up a series of waypoints on the circle, take a receiver to each waypoint, spray the ground, connect the dots.

There is probably an app you can do that with on a smartphone, does not happen to be one I've had need of.

For increasing levels of precision if a phone proves insufficient, there are fancier grades of GPS units.

Assume that one cannot climb on the rocks, e.g., the rocks are too slippery or are dangerously sharp, or it is taboo (thought to displease vindictive local gods), or the Russians have smeared them with Novichok. . . but it is possible and acceptable to pass a line over the rocks without touching them.

Two people take a 50 ft line (or a measuring tape) with a plumb bob hanging from the middle and hold it taut so the plumb bob is just over a spot on the rocks that the two people agree to center the circle on. Each person uses a plumb bob to mark the spot under their end of the rope and drives in a stake. The specified circle is now determined and it just remains to fill it out. It can be filled out with only the measuring tape.

There is a trig formula that gives the length of the sides of a regular polygon inscribed in a circle of a given radius*. For a circle of radius 25 ft this gives:

So to locate the two other vertices of the square use the tape to inscribe two arcs of length 35.36 ft from each of the original two stakes and place two stakes at the two intersection points of the arcs. There are now 4 stakes on the circle.

Next, from each of the four stakes inscribe two arcs of length 19.13 ft which generate 4 intersection points which are on the circle and put a stake at each of the 4. There are now 8 equally spaced stakes on the circle.

Next, from each of these 8 stakes inscribe two arcs of length 9.75 ft which intersect at 8 points on the circle and put a stake at each of the 8. There are now 16 equally spaced stakes on the circle.

Next, from each of these 16 stakes inscribe two arcs of length 4.90 ft which intersect at 16 points on the circle and put a stake in each of the 16. There are now 32 equally spaced stakes on the circle.

If you have at least a third person to hand (ideally four people), I suggest a variation of Jim Stewart's answer, but without any calculations.

As with Jim's answer, have two people hold a rope/line with a plumb-bob above the desired centre-point. The length of this main line isn't critical: its purpose is not to measure anything but just to maintain the position of the centre (if the two ends can be tied to something solid, or fixed to stakes, you don't need the two people holding it).

Attached to the centre-marker of the main line should be one – or, ideally, two – other lines. These should be 25' long (or be longer with the desired radius of 25' marked on them). Things will probably work better if this/these lines are lighter than the main line (e.g. string).

With only one of these secondary lines, just have someone walk around the perimeter of the intended circle and mark the positions of the posts at 25' from the centre. Care would need to be taken to not "pull" the centre-marker to one side.

With two secondary lines, the fourth person should stand on the opposite side of the circle. As well as being able to mark two posts at a time, they can help prevent the centre-marker of the main-line being pulled out of position.

Alternatively, have three people remain in fixed positions – at roughly 120° from each other – to keep the centre-point in the desired position and just have one person circling with a 25' line/string marking the positions for the stakes.

Lay the rope around the rocks and tie the two ends together at the marked points, so that you have a rope with circumference of 157.1 feet.

If you have helpers, let everyone take a section of the rope and pull it away from the center point as far as possible, then lay it on the ground. If you're working alone, try to simulate that. Adjust between the points of pulling to make the rope follow a circular arc.

You could also use the stakes at this point to taughten the rope; probably some iteration on their positions will be needed.

At this point, if you want it to be more exact, make a 6 to 8 foot template out of plywood with one side that is an arc of 25 ft radius, and use the template to more exactly adjust the rope.

Then spray paint around the rope.

Have a person climb onto the rocks and hold the center point.

It won't be super precise, but should be close enough for the rough estimate I'm guessing you need (since the rocks are still there).

A practical solution is to mark out sufficient points on the circumference, per one of the geometrical or analytic answers above, then paint your circle using a wooden or board template of an arc of the circle, long enough to accommodate two or three of the points.

You can hence compromise between the number of points you mark out, and the size of the template you use. You can even use a template with a slot to constrain the paint more neatly. I would have thought that more than 10 ft of template is going to be rather unwieldy, this would need around 16 points marked out. A five foot template would need around 32 points pre-marked.

Note that you should have enough space on your to mark up the template using a radius line.

Poster is spray painting the ground..... Use a Template.

Mark a template where you DO have access to the center point. Accurate and no math....

Cutout the Template, on your scribe line.

Move the template where you want. Spray paint the cut edge for a clean crisp line.

a 25' circle, will only take 6 sheets of 4'x 8' materiel cut into 2'x8' pieces (Lauan,Cardboard,ChipBaord, etc), glue or Stapled together. 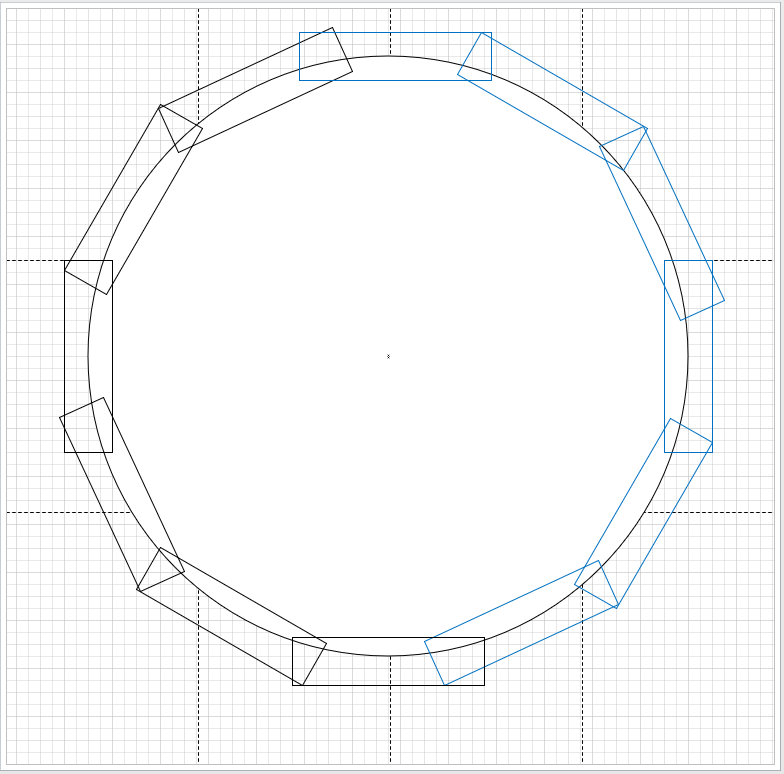 The midpoint of a sliding ladder describes a quarter circle. If you can lay out x and y axes, then a 25-foot ladder (or 25 foot taut string) with the midpoint marked will trace out a circle, a quarter at a time. See

B. GoddardB. Goddard
10911 bronze badge
4
Add a comment  |
Highly active question. Earn 10 reputation (not counting the association bonus) in order to answer this question. The reputation requirement helps protect this question from spam and non-answer activity.

Not the answer you're looking for? Browse other questions tagged design or ask your own question.

0
How do I stick paper on the wall in a stylish manner?
6
How can I calculate the load capacity of a platform?
4
How can I conceal an over-the-range microwave?
0
How do I make built-in bookcases for the corners of a room?
4
How can I verify that the protective earth/ground is separate from the neutral wire in an electrical AC installation?
3
How do I build the support structure for a 36"x14' built-in desk?
0
Is this base idea sufficient for a ground level, not attached to the house wooden patio?
0
How do I design a quasi tamperproof shower curtain rod mounting point for eldery with Alzheimers?
0
How to attach wheels to the base of slotted-angle rack?