I have two 150amp panels, both with sub-panels installed. I need to add a 50amp breaker for an electrical vehicle charging port. I'm looking for the best way to do this, with what I have available.

The single pole 30amp on the 'Barn Sub Panel' (Yellow Box) is no longer needed, and there is rarely load (only for a welder) on the 50AMP breaker in the same 'barn sub panel'. Could I install an additional 50 AMP breaking in this sub panel? Note that the breaker feeding the barn subpanel is a 40AMP. That seems to be an issue, but looking for thoughts on this.

Is there another configuration that could be considered to satisfy the additional 50AMP requirement? 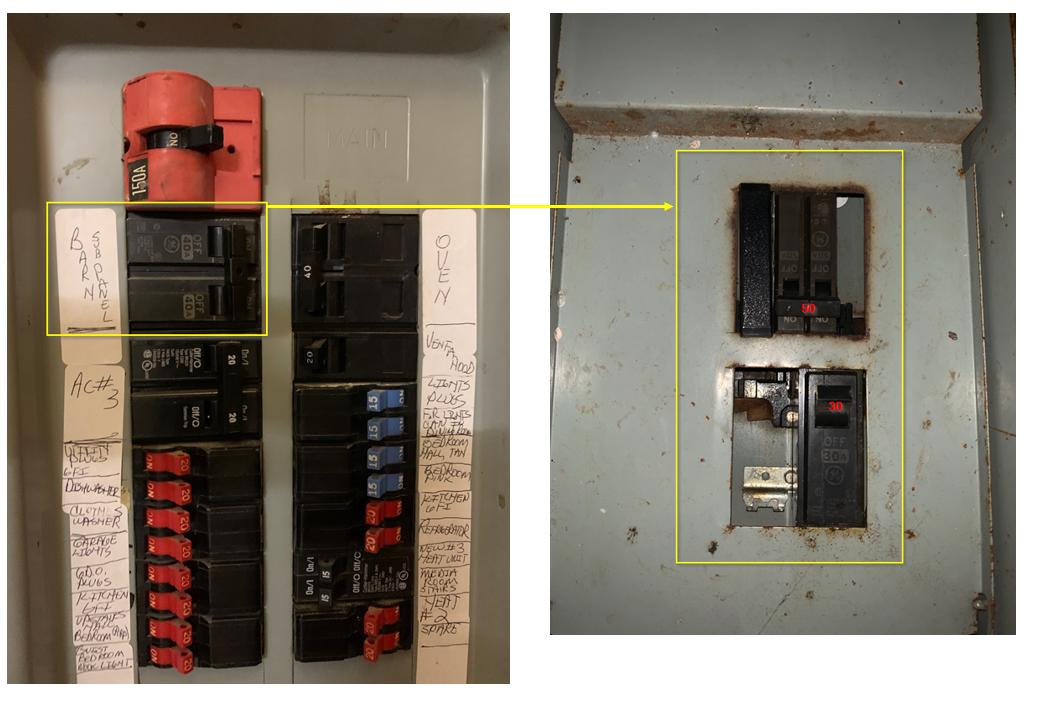 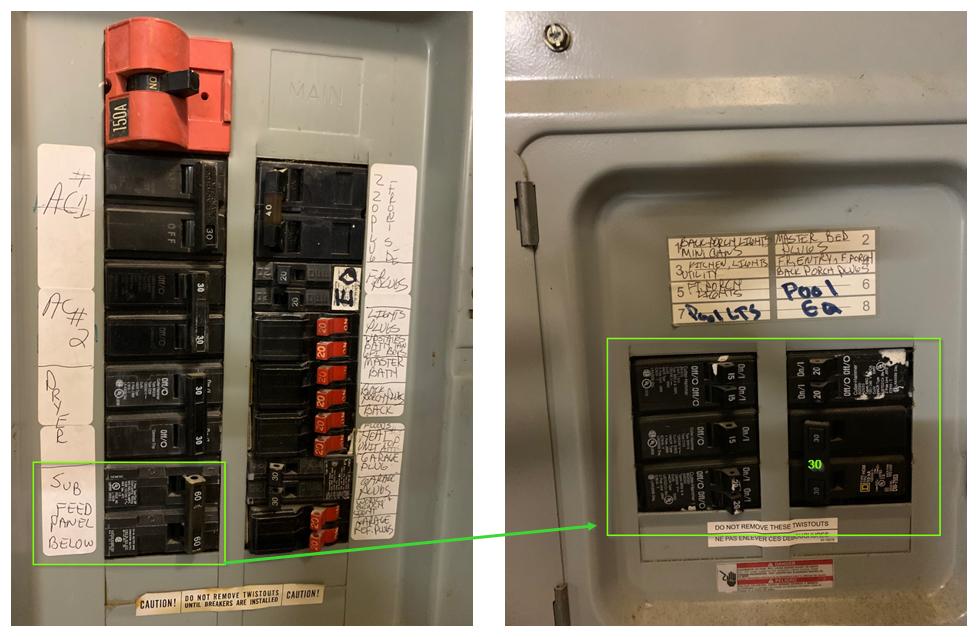 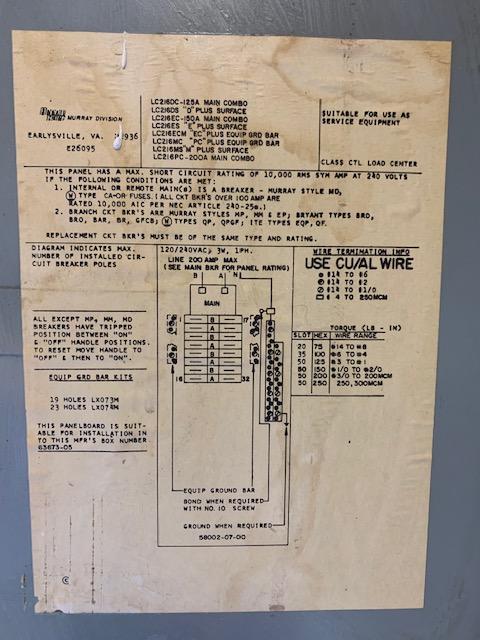 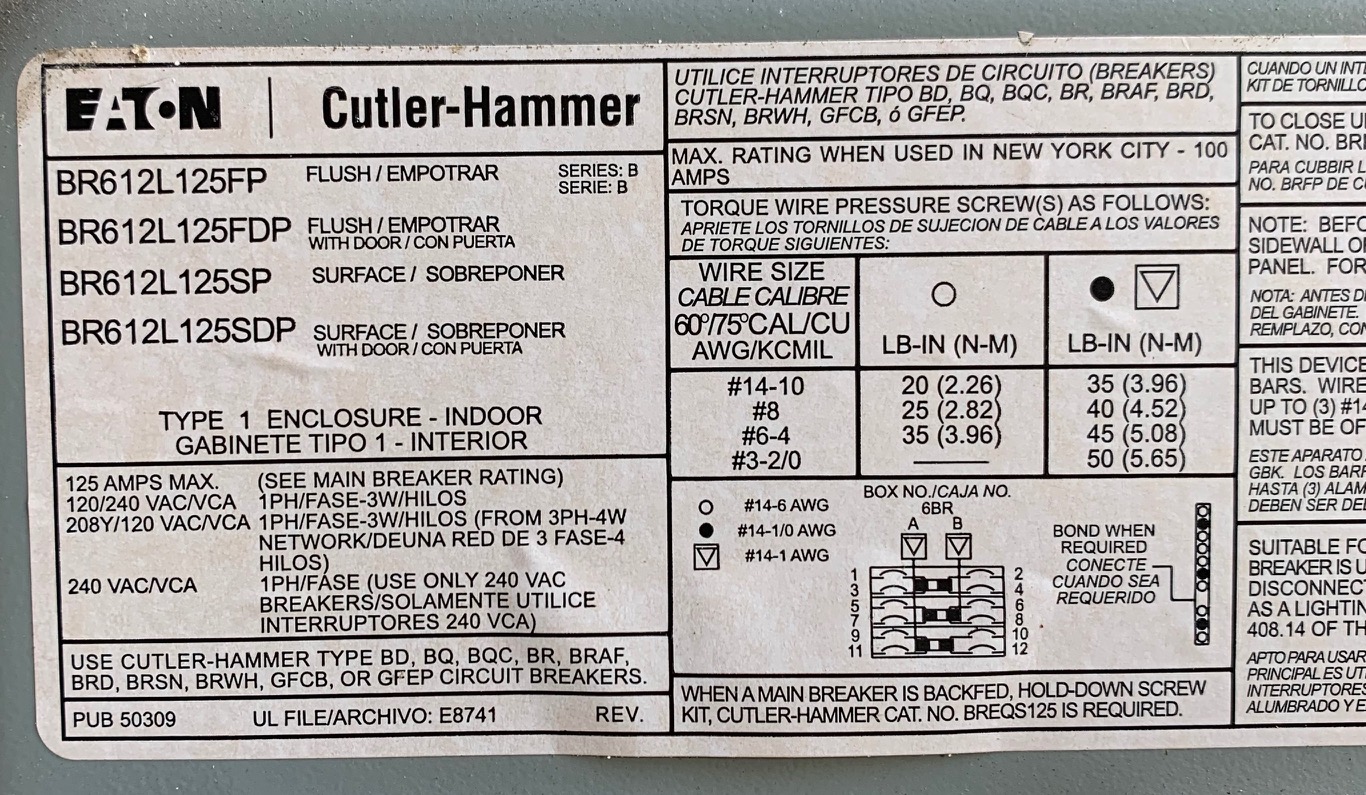 The good news: you only have a few things to clean up in your panels

The good news in your situation is that your "alien breaker" problem is less severe than it appears at first glance; while your panels are Arrow-Hart (Murray), they are cross-labeled to accept Bryant (now Eaton) BR, Westinghouse (now Eaton) (H)QP, and ITE EQ-P (apparently now Siemens QP), in addition to being able to use UL classified Eaton CL breakers and their native Murray (now Siemens, but recently discontinued) MP breakers. This means that we don't have to go on a wholesale breaker-swap rampage, but only have to fix a few troublespots. In particular, since you have 4AWG copper going to the barn, we can change the barn subpanel breaker out for up to a 70A breaker, conservatively assuming that the wire is 60°C rated. In other words, you can use a BR270, Eaton HQP2070, or possibly a Siemens Q270 here (the labeling issue is a bit weirder in this case since there appears to have been a designation change as the ITE breaker product line changed hands) if you can't find or don't want to search for a NOS Murray MP270 to go there, as Siemens discontinued the Murray product line over the course of the last couple of years.

Moving on to the micro-panel in the barn, we can start by removing the THQL1130 as it's no longer needed. From here, your options depend on if the barn has a shutoff nor not; if there's a shutoff switch at the barn that cuts off all power to the barn, you can simply whack in a THQL2150 for the car charger and a TFH filler plate in the top right to plug the open hole.

If the barn does not have its own shutoff, though, then things get more complicated as you'll need to add such. In that case, the filler plate in the top left comes out and both of the outer top slots are filled with THQP150 breakers, connected by a THT2 handle tie, to provide power to the car charger as it's a 240V only load and does not need common trip as a result, just common disconnecting. From there, you'll want to add a THQL21100 (the precise rating isn't critical as long as it's greater than or equal to 70A as it's merely being used as a shutoff switch here) in the bottom spaces with a THQLRK retainer kit holding it down, then move the feeder wires from the main lugs to the THQL21100 to allow it to serve as a main shutoff for the barn power. You should also make sure the bonding and grounding is correct here in this case; neither the welder nor the car charger need a neutral, so a 3-wire feeder with a single bonded bar in the barn subpanel can work, but you'll want to make sure you have a solid grounding electrode system at the barn all the same to keep stray natural electricity from making a mess there, at least.

Once that's done, we can move onto the rest of the situation. The possibly-THQL? breaker feeding AC#1 should go and be replaced with a proper breaker for the panel, and the double-stuff breaker labeled "Garage Plugs", while likely of a suitable type (Siemens QP/QT), looks to be overbreakered for the circuit unless it's feeding big, chunky 30A receptacles (NEMA 5-30 exists, and is dryer-receptacle sized) on 10AWG wire, of course. Finally, we move onto the pool panel, where that Homeline HOM230 sticks out like a sore thumb in a BR panel, and needs to be replaced with a BR230.

Of course, if you want to upgrade either or both of the micro-panel subpanels to larger units, that is a fair prerogative; unless there's a safety-switch somewhere for the main cutoff for the barn, you'll want to use a 100A or 125A, main breaker, 24-space or 30-space panel in an outdoor-rated/weatherproof (NEMA 3R) enclosure there. The pool panel looks to be at the same structure as the main panels, so the need for a main shutoff isn't an issue, and it can be upgraded to a 125A, 24- or 30-space, main lug panel in an indoor (NEMA 1) cabinet as a result.

This is how the panels ended up after some work this weekend. Cleaned up the breakers that dont belong in the Murray Panels. Upgraded the feeds and feeder breaker to the pool pump sub panel (Primarily to upgrade the panel in the future if needed.) 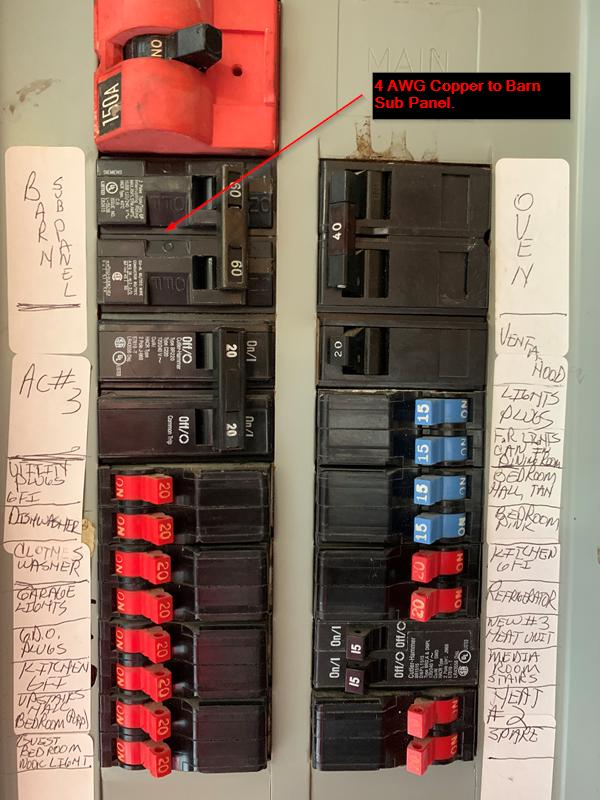 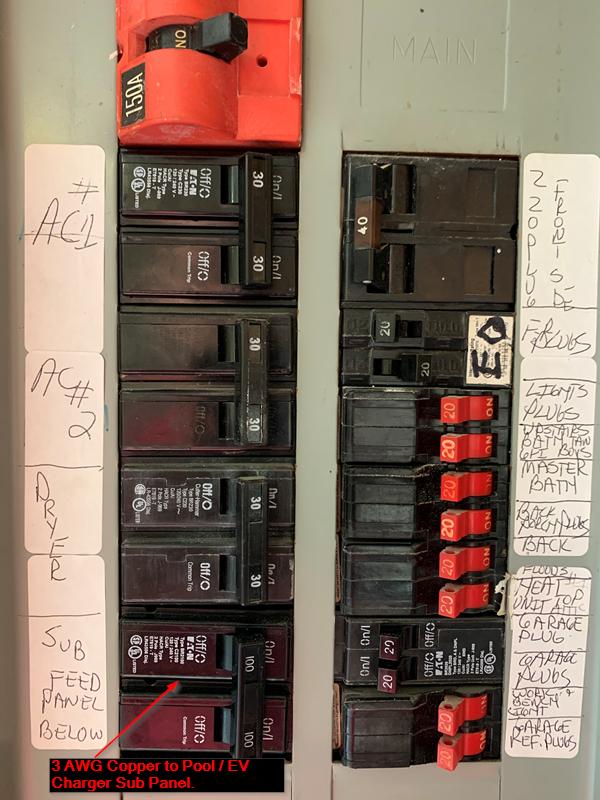 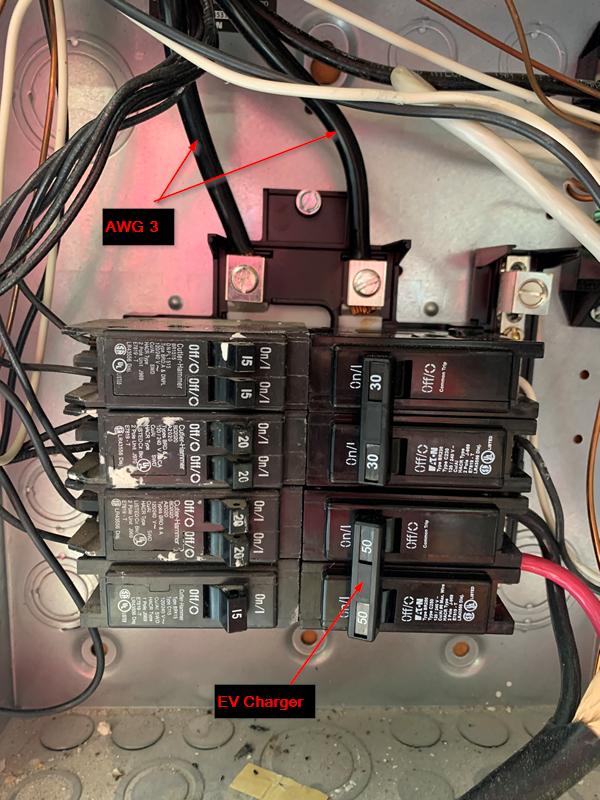 Your old 150A panel boxes are very full. However, repurposing the feeder's "barn" 30A 120V circuit for a dual pole 240V vehicle charger might be possible (the box seems to have two slots available for a dual pole breaker there).

First question is what size wire is run for the 40A protected circuit to the barn? I suspect its not up to 50A specification which is why they protected it with a 40A breaker. In which case you will need to either run new wires to this sub to handle the 50A and update the 40 to a 50 in the main; or consider a charger requiring less than 50A... If you keep the existing wring and its 40A protecting breaker, consider swapping the welder breaker to a 40A as well.

Also, you will likely not be able to weld and charge the vehicle at the same time over that feeder line. Can you plug your vehicle charger into your existing welder plug (in which case you will want to update the feeder wiring to 50A sizing).

To start with, there's a big "Alien Breaker" problem

Your two main panels (with the red main breakers) are distinctly Murray. Your colored-handle breakers are all Murray MM type.
There is no doubt this is a Murray panel (albeit an early one).

Unfortunately with many of these 1" wide panels, many breakers will seem to fit each other's panels. But they don't, actually. The bus stabs don't fit properly.

These early Murray panels are a real tangle. It normally doesn't work this way, but apparently the panel is cross-listed to accept both breakers no longer made, and also Eaton BR type breakers, but not modern Siemens breakers.

So the Siemens is an alien!

Wow, you need a seeing-eye dog to navigate these breaker compatibility issues.

The colored handle ones are fine; there's never been a reason to doubt old Murray breakers.

Most places stock Eaton BR. Home Depot certainly has plenty. No idea if the COVID-driven renovation boom has wiped out their supply; if so try local family lumberyards.

Your pool panel is also a hoary mess of alien breakers. Identify whether this is an Eaton BR or Square D panel, and replace all the alien breakers with the correct family of breakers. Eaton does make a breaker specifically for Square D panels, but BR ain't it. It is called Eaton CL and it's a bit hard to find. Breakers cost about $5 per handle, so a duplex costs $10 and a 2-pole cost $10.

The GE micro-panel can't have holes in it

Your GE panel is all GE breakers, so that's fine. However, it has holes in the cover and that's not allowed. You know that 40A GE breaker you just ripped out of the Murray panel? Stick it in this panel just to replace the 30A. One hole filled. Since the welder has been successfully powered through it all along, it clearly is usable for the welder; so that's that.

What's left is a 50A 2-pole half-width that can only mount "in the middle" like that. It must have, on both sides, either half-width 1-pole breakers, or listed GE blanking plates: you cannot have a hole!

I suspect a blanking plate fell out; that's why I don't like the things. They're hard to find, expensive and flimsy. I prefer actual breakers for hole-fillers; they are easy to find, cheap, solid, and useful.

The 50A breaker is functionally only a disconnect switch, since the 40A (now Murray) breaker in the main panel is the limiting factor on current. But it could power something. Or you could just junk it and replace it with another full-width 40A breaker.

OK, that cleans up our panels.

You can't run the charger in 50A mode from this panel

You can't run a load continuously at max power. Continuous loads must be derated to 80% of rating, which means on a 40A breaker, you can only plan to pull 32A actually.

Aligned with that rule, a "50A" electric vehicle charger only pulls 40A. But you can't run that continuously since the 40A feed breaker (and wires in the walls) are only good for 32A continuous.

Many chargers have a programmable mode which allows them to be set to match the available power. If you can program this charger to run at "40A mode" (32A actual draw rate), then you can simply plug it into one of the breakers in the barn sub-panel.

Otherwise you have 2 options, none pretty:

This house had a serious case of the latte's. The upgrader could've bought a 12-space panel, but instead bought that GE micro-panel and a couple of latté's. Could've bought a 18-space pool panel but instead got that 6 and a couple of latté's. And now you're painted into a corner. Don't repeat that mistake. I'm not saying overspend on everything, but panel spaces in particular are cheap. Go big: go crazy big. Make sure you never run out of spaces.

I should be set. Really appreciate the support and advice on this project.

Not the answer you're looking for? Browse other questions tagged electrical-panel circuit-breaker subpanel or ask your own question.

0
Can the breaker on a sub-panel be rated for more amps than the main breaker?
2
Add circuit off main disconnect or sub-panel required?
2
How should I wire a subpanel for a tiny house?
3
Can I add a 240v outlet inline with a sub-panel supply circuit?
0
Breaker for my subpanel for the pool keep tripping
1
Sub Panel using Sub Feed Lugs
1
Can I feed a sub panel off my 200A service box? Or would I need to run wire from the inside breaker box?
0
30Amp Sub Panel for EV Charger
0
Can I Install a Sub-Panel from an Existing NEMA 5-50 Plug?
0
Can I put a 60 amp breaker in my sub panel that also runs ona 60 amp breaker from main panel