I am looking to install a geothermal heating system to provide hot water and heating in a small home. I am aware that constant cycling of the geothermal heat pump is not desirable, so it is usual to use a buffer vessel to store residual heat for the heating loop. The problem is that we are very constrained on space. We also intend to use the heat pump to provide hot water.

I have found some hot water cylinders that have dual heat exchangers. These are often used when you have multiple heat sources, but I was thinking that there is no reason i could use one of the exchangers as a sink instead of a source, and use it to heat the underfloor heating loop. Then the hot water itself is used as the buffer to reduce cycling.

The hot water cylinder thermostat that would be used to control the geothermal heat pump, aiming to keep the hot water at a sufficiently high temperature. The room thermostat would control the circulation pump on the underfloor heating loop.

Please see the attached diagram (I have ignored expansion vessels, etc, for simplification): 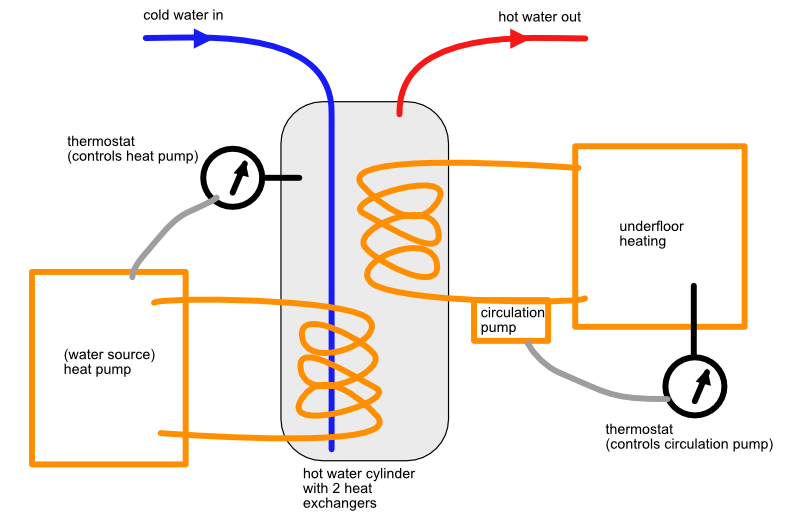 Logically, this seems like a sound solution to me: it avoids the need for a dedicated buffer tank, reduces the cycling of the geothermal pump, and eliminates the need for complicated valve controllers to efficiently balance the distribution of heat between hot water and heating.

Am I missing anything obvious? What are the caveats to a solution like this? Any advice appreciated.

There's an easier way to do this

Your first issue is that you are using the domestic hot water as your buffering medium, which forces several constraints on your original proposal, including the need for two heat exchangers connected in series, as well as having to keep the tank at or above 135-140°F to keep your tank from turning into a Legionella nest. Furthermore, the two-exchanger configuration would require two feedwater trains, two air separators/air vents, and two expansion tanks, which adds needless cost and complexity.

Instead, I would use a reverse indirect hot water heater such as a Turbomax or Ergomax as the buffer tank. This uses the boiler (heat pump) medium as the buffering medium, running the domestic water through a heat exchanger coil in the tank; thus, you effectively get tankless performance without many of the tankless drawbacks. It also provides a convenient hydraulic separation point between the heat pump and the load, and helps separate that ever-present pest known as air from the water in your heat pump system.

On one side, you'd have your heat pump and its associated circulator, controlled by the tank aquastat in order to keep the tank at an appropriate temperature, with the supply and return lines connected to tappings on the tank. On the other side, you'd have your radiant loop, connected as a mixing loop with its own circulator and a mixing valve in the supply side, mixing return water with supply water to feed the circulator suction.

Unfortunately, there's no clear place to put the water feed and expansion tank in this system, because of the apparently-packaged nature of the heat pump/circulator combination; if its circulator is indeed external, then I would put the expansion tank and such immediately on the suction side of the heat pump circulator. Also, don't forget to put a suitable backflow preventer on the water feed to this all, especially since you're planning to use glycol in this loop.

And yes, having a hydronic professional work with you on this system design would be a good idea; all I can do is give you a starting point for this, but they'll be able to figure out pesky things like where to put the expansion tank much better than I can, as well as being familiar with local backflow prevention requirements and such.

So, you want to add more heat sources to this?

Fortunately, because we have the reverse-indirect/buffer supplying hydraulic separation in our system, we can add other heat sources to this system, even "wild" ones, quite simply, without the need for extra heat exchangers and their associated complexities. This is done by manifolding the supplies and returns of the heat source loops together at the tank, or by using additional tank tappings if they are available, for that matter. Each heat source has its own circulator and flow-check/non-return valve; the main complexity is in the control logic to decide which source(s) should supply heat when the reverse-indirect's aquastat calls for it.

If you want more information than I can give in a Stack post, by the way, I would recommend John Siegenthaler's articles (which are largely collected into a set of 5 e-books), as well as Dan Holohan's "Pumping Away", and Caleffi's idronics series of design journals.

Depending upon how sophisticated you want to get, I see a number of potential issues. Sizing of everything is very important. This should be engineered.

Here are some of the potential issues: the heat pump might not be able to supply enough heat during high demand periods like very cold outside and ppl taking showers.

You should get an intelligent tstat that can learn about the performance capacity of the system and adjust to it. IE: Adaptive Intelligent recovery.

This will be a substantial investment for you and my recommendation is to have a designer/engineer help with the planning and sizing. I hate to post "call a pro" here, but unless others here are willing to provide a lot of help, it's probably worth it.

Not the answer you're looking for? Browse other questions tagged plumbing heating water-heater or ask your own question.

3
How does Underfloor Heating get the right temperature water via a Thermal Store?
1
Desuperheater vs Heat Pump Water Heater
1
Is 68F too low for hot water heating thermostat? Final radiators not getting heat
3
Anyone installed a hot water coil in their HVAC ductwork to increase heat pump efficiency?
0
Hot water cylinder (direct heating), loosing heat and pressure during the day
2
Hot water heating recommendation
0
Heating home by blowing hot air in to desired areas