My Grohe LadyLux3 kitchen faucet's flow rate has gradually slowed in the 4 years since we installed it, so that now it's flowing at 0.7 gallons per minute, which is less than half its rated flow rate of 1.75 gallons per minute. The flow isn't even strong enough to keep the "spray" setting active without holding the button on the faucet head. When we first installed the faucet, the flow rate was close to the rated level.

I assumed that the problem was sediment buildup in the aerator so I replaced the cartridge in the faucet head. Surprisingly, this didn't fix the flow rate at all. I then tested the flow with the head removed completely, and the flow rate only slightly increased to 0.77 gpm-- still less than half of the faucet's rating.

The flow is the same regardless of hot, cold, or mixed-temp water. It's the same when just turning it on vs. leaving it flowing for a few minutes.

No other faucets in the house have shown a similar decline, so it seems unlikely to be a house-wide change in water pressure.

The change has been gradual-- it's not like one day suddenly the flow was cut in half.

The valves to both the hot and cold water under the sink are fully open.

We haven't made any plumbing-related changes since the faucet was installed.

Any ideas for how to get the flow rate back to normal?

If it's equal between hot and cold, it's at or after the cartridge. Since you've ruled out the flow restrictor/aerator, the easiest next thing to take apart is the quick connect leading from the mixing cartridge down to the flexible hose loop. It's K in this diagram and usually made out of plastic that might need some delicate handling to detach without breaking. 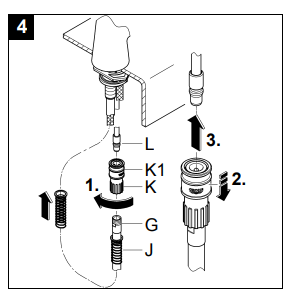 I wonder if you don't have some debris in there.

If you don't want to do try to detach the quick connect, you can also try removing the cartridge again and blowing into the outlet to dislodge the debris and shoot it back up to where the cartridge is.

If there's no debris, or even if there is, point the output from the hose to a bucket and turn on the water and the faucet. The pressure at that point, without the hose, will help you narrow down the problem. If you still get low pressure there, that would be very weird since the blockage can't be upstream of the cartridge.

Not the answer you're looking for? Browse other questions tagged faucet water-pressure plumbing-fixture or ask your own question.