Painted walls showing darker when dry where painted with brush, than with roller

Where the paint was applied with a brush, it is considerably darker than where it was panted with a roller. 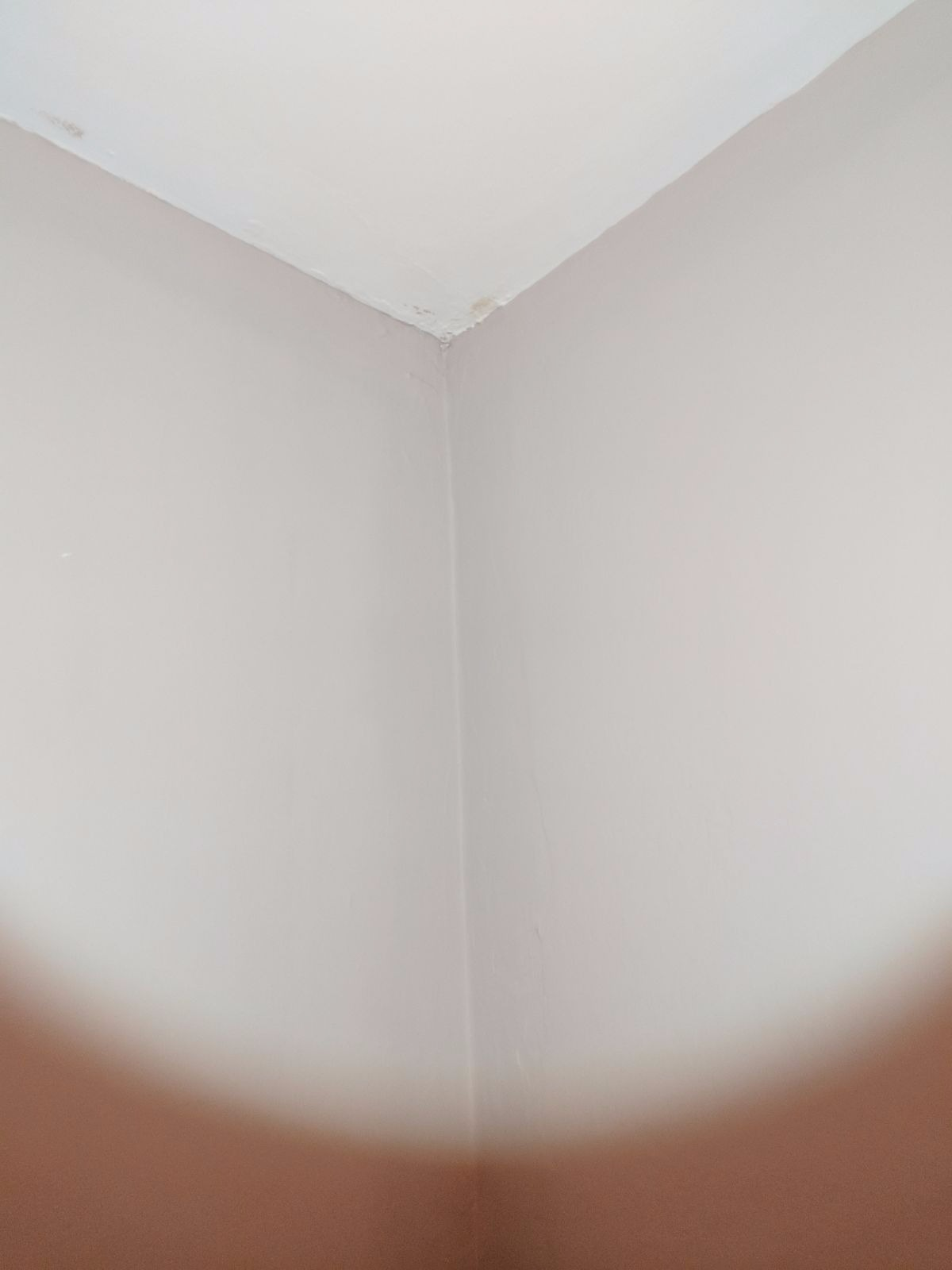 As you can see, there are dark "areas" around the wall join, and the joint with the ceiling. I'm shining a very bright torch as it demonstrates the problem better, hence the odd looking shadow at the bottom of the image.

I've asked a handful of very experienced people I know who have painted many rooms (all DIYers, but still), and they all concluded that the paint wasn't applied thick enough on the wall itself, and that actually the problem is not the joints, but the main area of the wall which was applied with a roller. Upon hearing this, I was slightly shocked since the dark areas actually look like they are not well adhered, but I played along and re-applied the whole room using a roller with a third, then forth coat, and the same problem persisted.

At that point, I decided I was right, and that it is the areas around the corners. I've now been out and purchased a much smaller roller, which has allowed me to cover the corner areas with great success, and now they have been painted with that the problem has disappeared entirely, except for the very thin slithers around the edges where I have a 5-10mm gap which I daren't touch with a roller, even if I mask, since I'm going to make a really big mess, the roller won't roll properly, it will grind on the ceiling (even masked) and leave streaks... It's just not a good move, I can feel it going horribly wrong and being very frustrating already.

The question I'd like to ask is how can I achieve the same finish using a brush as I did using a roller. I would imagine the problem is something to do with the pattern a roller leaves reflecting light in a certain way, since that would fall in line with my experiments so far. Naturally I could just roller them very carefully and re-paint the ceiling and skirting, but that defeats the object. I want them looking good, and I've done this before without problems.

Can somebody explain the physical problem, and possibly suggest a solution to it? I'm 5 tins of paint deep at this point, and it should've been a 2 tin job at most if I hadn't been misguided so badly.

In my experience, you can't. I usually find that brushed paint doesn't cover as well as paint applied using a roller. I find it helpful to do the corners first, going slowly. Apply extra coats as necessary. Then use a roller for the main part of the wall and paint as close into the corner as possible. A damp cloth (if water-based emulsion/latex) and a paint-guard can help.

I don't know about you, but I find I am much more fussy about these things when I am doing the work, but after a week I never think about or notice small defects any more.

Glossy paint shows differences much more than satin or less glossy paints. When painting along the ceiling and corners it is important to do small sections at a time. If the brushed paint dries before you overlap it with a roller you will see the differences much more. Paint about 3 feet (1 meter) along the top with a brush and then use a roller to paint from the unpainted area of the wall in towards the wet brushed area. Do not put the wet roller on the wet area and go into the unpainted area. Once you are done that section of the wall paint the next small section along the top with the brush and continue as before. The key is not to let the paint dry too much before going into it with the roller.

Not the answer you're looking for? Browse other questions tagged painting or ask your own question.

3
How large an area is needed to make a paint sprayer worth it?
3
What is a good technique for cutting in when painting?
1
How can I remove brush marks from a wall painted with metallic paint?
0
Dark spots on painted wall
2
When painting with a roller sometimes it feels uneven, like the cross-section is an oval rather than a circle. What am I doing wrong?
1
Painting Dark Color
0
Can rough paint texture on a ceiling be touched up?
3
What is the best paint roller for a wall and for a Formica cabinet?