For reasons entirely unrelated to quality of their work I've lost faith in the company that just poured a concrete slab at the (only) entrance to my property.

I live in Auckland, and its late spring, meaning the temperatures vary between about 8c and 18c, and 50-80% humidity at the moment.

Before getting the job done, I discussed timings with the contractor and was advised it would be OK to drive my cars over it 2 days after he finished pouring. After an additional day I could drive a light van over it, and trucks could drive over it 14 days after it was poured. It has now been 2 days since it was poured - but the contractor has not yet come back to cut joints in the concrete. Nonetheless he has again confirmed its OK to drive on it.

I have just taken measurements of the slab, and if I am reading it correctly - I'm not sure I am - it is between 150mm and 170mm high at various points. Somewhat concerning however is the low placement of the bit of mesh that is sticking out at the end as per this picture: 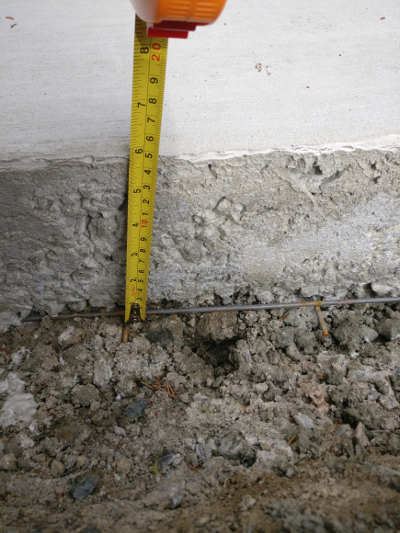 I have the following questions - and would appreciate any insights -

Is it really OK to drive on the concrete after only 2 days?
No. Even if control joints were cut, the concrete is at a fraction of its ultimate strength (maybe 15-30%, depending on several factors). You run a high risk of breaking it at other locations.

Will the slab further strengthen by in the order of 25% over the next 12 hours?
Maybe, but that's 25% of the current cure extent, which could still be a minor fraction of the ultimate strength. Cure rates depend on many things, from mix to water content to weather to after-pour care. The cure amount does grow substantially over the first few days, but it's folly to take guesses. Give it at least a week (ideally two) if at all possible.

If I drive over concrete which is still in the early stages of curing/setting and it doesn't visibly crack, am I weakening the eventual strength of the concrete?
Cracks due to vehicle traffic are usually apparent right away, but it is possible that you'll crack it and not know it until dirt starts to accumulate on the line or it opens further. If it doesn't crack, it's probably not weakened in any substantial way.

If I drive on the slab prior to joints being cut am I more likely to damage it?
No, but it is more likely that you'll end up with crooked (uncontrolled) cracks, which are ugly.

Is the placement of the mesh a concern?
Yep. It should've been pulled up into the center third of the slab's thickness as the pour occurred. It's possible that what you see there is an anomaly, but it's not a good sign.

No, 48 hours is not good. " High Early strength" cement reaches 50% of minimum strength after 7 days ( I think at 70 F about 21 C, longer at lower temperatures) . You can check at the Portland Cement Association site. Cement gets stronger for a long ( year) time. Initial compaction ( like vibration) improves the final strength . It if good to keep the surface damp for a couple days after pouring. I would say rebar is necessary for truck traffic ; mesh is for sidewalks -- but I am not a Civil Eng.

Not the answer you're looking for? Browse other questions tagged concrete or ask your own question.

3
Renovating Crawlspace with Poured Concrete Floor
0
how can I check to see if a 4" slab of concrete was actually poured?
2
How long will Concrete bond together when poured over multiple days?
0
Relatively new concrete porch crack
1
Ceramic tile on concrete with shrinkage cracks
3
Wood siding meets concrete
2
Large concrete patio poured against the foundation - should it be tied to the foundation or not?
18
What happens to foam insulation board after you pour concrete slab?
0
approximate strength of poured reinforced concrete slab