Find below a picture of our USA house's electrical panel (There is a box enclosing the panel that for the time being can only be removed enough to get an angled look/shot of the panel, not straight on, sorry).

Adding up the amperages on all the breakers (even the double pole ones, which I presume are to get 240v at the amperage written on one of the two cream coloured plastic ?paddles?) comes to 450A (700A if both numbers on each double pole breaker are inserted into the calc). Just the single pole breakers adds up to a more expected (to me, given the house was built in the 70's) 200A.

Further complicating the self-determination of total allowable amperage of the feed into this panel is the top two banks of breakers have "Main Disconnects" next to them, but some are instead labeled with high amperage appliances (the rest aren't labeled (?any longer?) as to what they control power to). Lastly, there doesn't appear to be a ?easily accessible? main breaker to definitively determine amperage of our service.

Can anyone help with the question of total amperage able to be drawn through the panel with installed breakers, and/or if needed, debunk some of my assumptions? 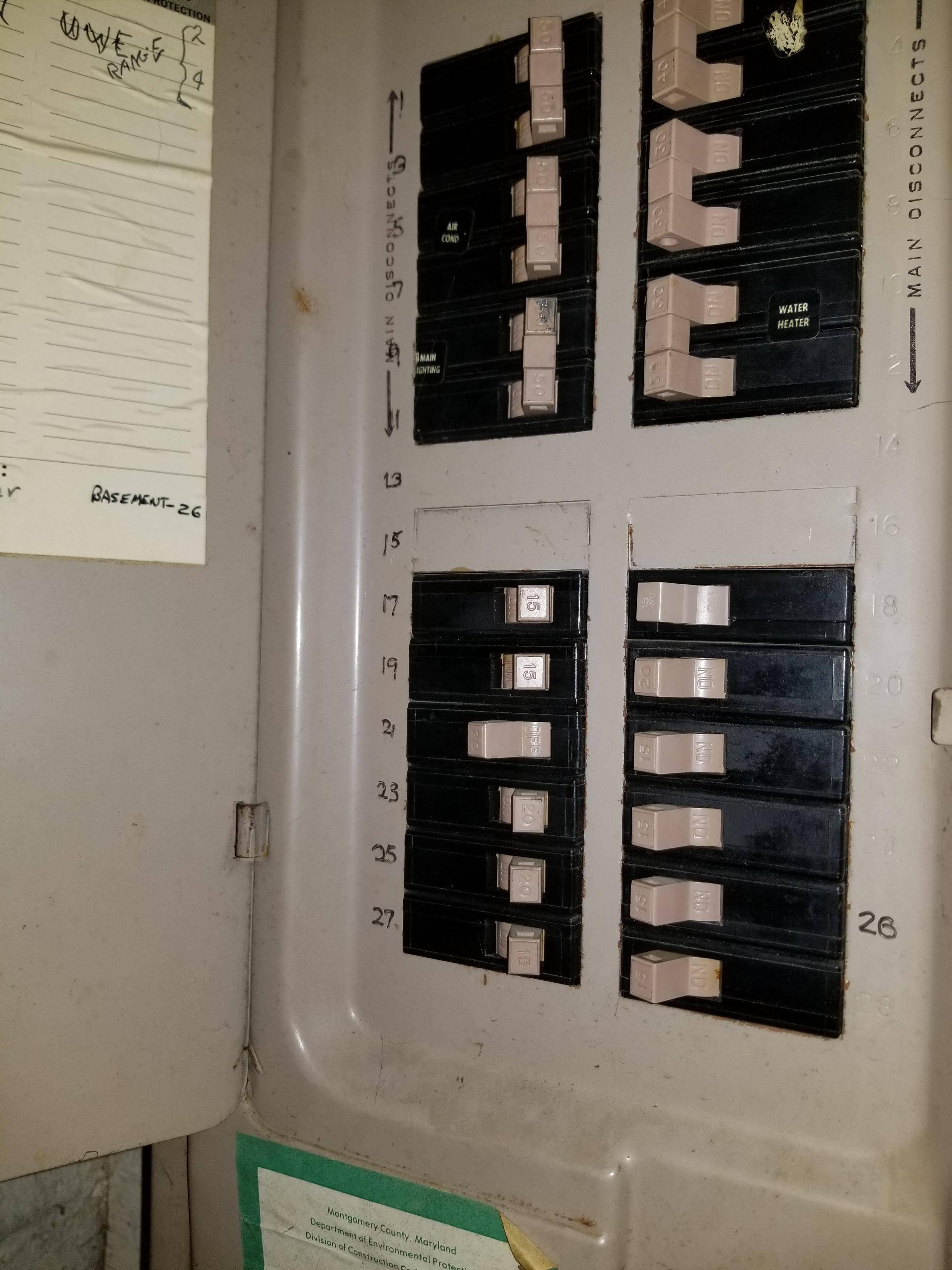 TLDR: Ask the power company what size your service is. There may also be evidence on the meter or meter pan.

This is a classic "Rule of Six" panel

Where's the main breaker? Electrical service to houses used to be 60A. As it got bigger, there was a problem - large breakers like 100A or 200A were very expensive. A compromise was struck where the "main breaker" could be up to six smaller breakers. That's what you see in the upper part of this panel.

They are not paralleled! Each of the breakers serves a different load.

This panel, like many "Rule of Six" panels, has its own built-in subpanel - that's what you see in spaces 17-28. The subpanel area is fed by one of the six breakers in the "Rule of Six" area. This feeds all other loads in the house.

(Space 15-16 are not spaces, the lids are renovable but there are no busbars behind them.)

What is in the upper area? Probably, based on labeling,

You notice this adds up to 250A -- there's no such service size. You also notice the subpanel breakers add up to way, way more than 50A, so you can see it's normal to oversubscribe breakers on a service. Actually, breakers are there to protect wires and appliances. Wire size (e.g. 12 AWG) decides breaker size (e.g. 20A).

What size is my service?

As far as the subpanel area, your service is 50A, but hold that thought.

As far as the capacity of the "Rule of Six" area, you'd need to consult with your power company or look for evidence at your meter or your meter base.

EDIT: Your other limiting factor is the capacity of the panel. Search it for marks as to its maximum capacity in amps, typically 100, 125, 150, 200 or 225. Exceeding this is out of the question.

Keep in mind you only have 5 breakers in the "Rule of Six" area and you are full. You can get CH breakers up to 100A ($50) or 125A ($110) in the normal shape (which would force you to abandon one large appliance)... or 150+ amps in "beast mode" packaging, where the breaker is 4 spaces wide (eliminating two large appliances, ouch).

The problem with the "Rule of Six" design is there is no main breaker to keep you honest, so nothing really keeps you from putting in six large things and overloading the circuit and burning those wires. That's why Rule of Six was outlawed. You can't buy a panel like that today, and you shouldn't continue this one in service any longer than you have to. Dismantle it lovingly, and offer it up on eBay. It'll save someone's bacon. But only sell it to a licensed electrician.

If it was my house, I would add an additional sub-panel quite near this one, and move all my loads to it. Then I would fit one of those big CH breakers in the "Rule of Six" area and have it only power that subpanel. Put blanking plates over every other space in the old panel, and you now have reduced it to a giant main breaker only.

EDIT: Alternately 2 or 3 subpanels, as I would not be inclined to pay the big bucks for the 150A jumbo breaker.

I am very picky about panel brands. CH is a fine type (other than this one being "Rule of Six"), and I would even consider CH for my new subpanel. Reuse all your breakers!

It needn't be done in one sitting. Find a period when you can do without enough loads out of the Rule of Six area to make room for the new breaker (like A/C in winter). Once you wire up the new panel, at that point both panels are live, and you can move the other loads at your leisure, one per Saturday or whatever works for you.

Adding up the amperages on all the breakers

and/or if needed, debunk some of my assumptions?

I think I see where you are going wrong with this part, other people in comments have pointed out how to try and track down the main breaker. As for the wrong assumption, you will not learn anything by adding up the amperage of the individual breakers in this box. They can add up to way more than the box can handle, and that is just fine.

All breakers are about protecting a specific circuit for overloading. Most of them are about the circuit from the box out into your house. So a given 15 or 20 amp breaker is determined by the wire in the walls. The wire coming into your house also has a max rated amperage as well and that is what is protected by this main breaker that cannot be found. In my house that is a wimpy 100 Amp breaker.

In the panel I have some big branch circuits like an electric double oven, an air conditioner, a sauna, a big table saw. Just those are almost 200 Amps. So I have to be careful about which things I run together. I cannot run the table saw when both ovens are on from experience that plus the random lights and other things push my total draw over 100 Amps. Which triggers the main breaker to protect the panel and incoming wires.

One thing you could do is call your power company and just ask them what sort of service you have, they will be billing you based on that and should be able to also let you know how much it would cost to upgrade your service to something bigger. I found out is costs enough that I just don't work in the shop when there is lots of cooking going on in the house.

This is likely a split-bus panel where you have multiple main disconnects. The "Main Lighting" breaker (50A) is probably what controls the lower set of breakers, and is your effective capacity if you're considering adding new circuits.

Edit: I previously assumed there must be a separate main breaker, but after recognizing this as a Cutler-Hammer panel (my house must have also been rewired in the 70s) and googling a bit, I found the above answer which should also apply here. Thanks to @Speedy Petey for the helpful answer there, and @Peter Bennett for a comment below that set me on the right path. I'm replacing my prior incorrect answer.

7
What is a split bus panel, and how do I recognize it in the field?
2
Where is the Main Shutoff my Cutler-Hammer Breaker Box?

11
Do the breaker amp readings sum up to dictate my current panels total / possible amperage?
2
ok to put these two water heaters on a sub-panel?
0
wire greenhouse subpanel
0
Adding more to 125A Main Service
4
electrical service to a shipping container workshop
2
Power to Sub-panel
3
Need help understanding amperage ratings for panels and sub panels
10
New house generator AC breaker tripping
1
Electrical design for large property
0
What's the current input from each leg of a portable generator into my main panel?