I just moved into a rented apartment.
The bedroom closet/office has carpeting which is mildewed.
It noticeably smells offensive and I am allergic to mold.

We looked under the carpet.
At the edges, we can see that 60s style ceramic tiling was cut away,
so the room likely used to be a master bathroom.
Currently, it is layered as carpet, then padding, and then exposed floor.
Beneath that is the next floor down: an unfinished basement.

EDIT:
We checked the basement.
(The floor is concrete with roughly 1/8" layer of dirt.
Does this suggest flooding in the past?) The walls are jagged concrete
which is brittle and crumbs off to the touch.

More related, there's two or three 1.5' x 1.5' cuts in the ceiling
where I could only assume pipes used to run.

The cuts have since been covered on top with particle board.
The basement ceiling beams, which are large and old
are somewhat moist to the touch;
they have a very slight wet sponginess when pressed with my finger.
The particle board feels less spongy, but still has slight exterior wetness.

How should we approach this?
We believe the landlord, who just moved out of this apartment,
attempted to address the issue by pouring and vacuuming carpet cleaner,
but it was not enough.

We believe that if we treat the carpet,
it may not have a significant enough effect,
and worse, it will recur after a relatively small amount of time.

Thus, is it fair to request that the carpeting be completely replaced,
and that the flooring be somehow definitively insulated
against further contact with any sources of moisture?

Most importantly, in case the landlord is unsure of how to accomplish this,
what is the recommended approach to relieving such a home improvement issue?

The landlords are very nice and competent;
however, they have stated that they are from the West (US)
and are unfamiliar with basements as they have never had one before.

Would 1-2 layers of plastic lining just need to be applied
between the carpet padding and the hard flooring?
Would this be enough of a seal?

The problems you describe are likely on the outside of the building. I'm willing to bet the landlord is unaware of this, or they are simply unwilling to fix it. This likely isn't fixable by you.

The moisture is coming through the concrete. Concrete is porous, so it will wick water from the surrounding soil naturally. To help prevent this process, basements are typically surrounded by a weeping tile. This is how the outside of the building basement should work

In new construction, this is corrugated pipe with a sleeve to minimize dirt, but in older buildings this was literally clay tile. So, what happens over time is this tile can break (it's ceramic), blocking the weepers. There's no way to find this out, except to excavate the outside wall and look at it. (image source) 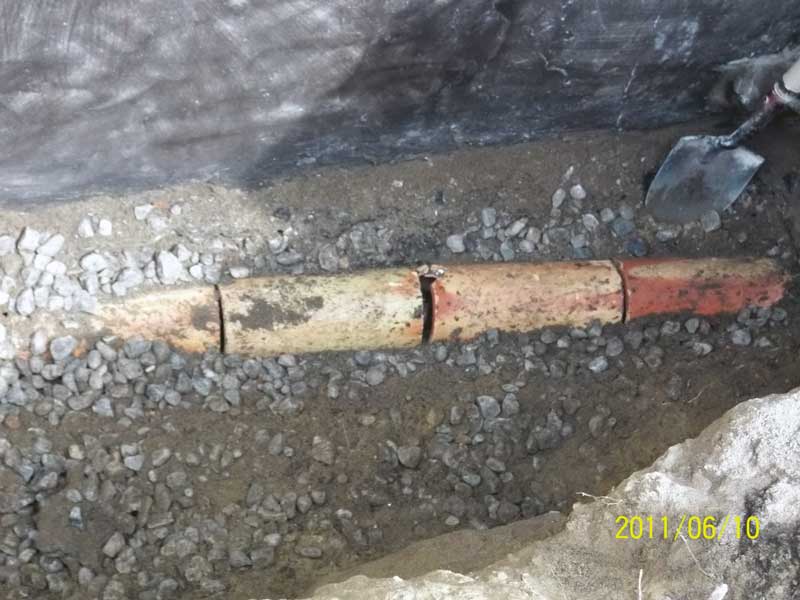 Repairing this is not cheap, obviously. It's not surprising that it was ignored if it was known about.

If the joists are spongy, it means they've absorbed a lot of water. I'm surprised it hasn't attracted termites yet. This could be making the apartment structurally unsound if it has been an ongoing problem. Even if there are no termites, the wood may begin to rot.

The only thing you can try yourself is a dehumidifier. But if the room is humid enough to wet the floors and joists, a dehumidifier will likely be overwhelmed very quickly (you will have to empty the collected water frequently). The owner should call in a foundation waterproofing company to excavate the basement walls, water proof them, install new weeping tiles, and slope the ground away from the structure.

4
Pros and Cons of floated flooring
12
What are our options for carpeting the basement of a split-level house?
3
Can I install sub floor over carpeting?
3
What is the best flooring for my basement?
2
Help diagnosing source of basement moisture
0
Joists in Basement (for main floor) black - is this mold?
0
Carpet Tile for maintaining Squeak subfloor
9
We have mold under carpeting, what should I do?