How could I motorize my venitian blinds?

I just moved on to an appartment which have a set of 9 venitian blinds.

Each come with 2 actions : a string you pull to lift the blind, and a stick you spin to spin the blades and filter more or less the light.

I would like to motorize the stick and remote control all of them. (I'll probably never lift them)

I know how to use arduino with a raspberry pi to remote control things with radio emetters, but I have no clue what to use to motorize things.

The stick is made of plastic, a little elastic but solid though, and the force needed to spin them is really low (2 fingers are more than enough). More, you can spin the stick a little too much, it wont cause any damage, so there is no need for sensors yet.

Here is a picture of the subject. There are 9 of them and some are really high so I only have access to the bottom of the stick. 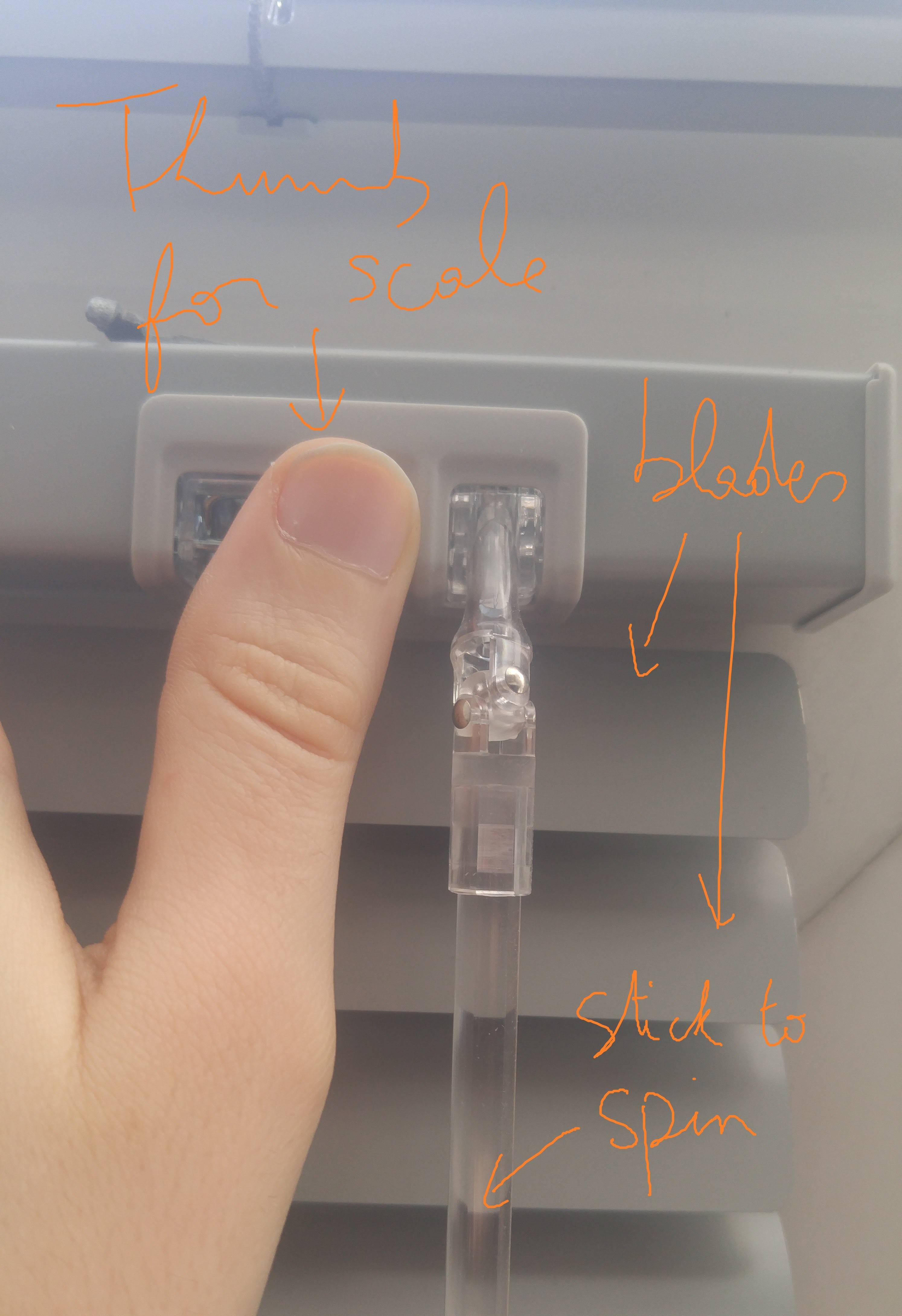 So, for this project, what should I consider regarding the motorization ?

If you have experience with Arduino, you have most of the project in good stead. Servo motors and stepper motors are commonly used with Arduino to accomplish similar tasks. Your answer lies as much in your budget for this project as it does for the selection of motors.

A 360° capable servo will rotate when driven by the proper code, operated by an appropriate servo driver board. Non-360° servos are limited to about 180° movement, far too little for your rotation needs. You can find code libraries to cover this aspect, as well as appropriate hardware from the multitude of Arduino sources, Sparkfun, Lady Ada, Amazon, etc.

The other option would be a stepper motor, stepper motor driver boards and code libraries. As you've noted that a bit of overdriving isn't a problem, you can get away with some slop in the positioning. A stepper motor is commanded to move a specific number of steps. If during this command execution, movement is impeded, the motor keeps counting and may stop short. Some stepper motors also have encoders to report location/progress, but that increases the price, of course. Servo motors by design "report" location and attempt to move until success or servo motor burn out.

Stepper motors would have sufficient power, even those among the low end force models, while servos would require purchase of the higher end components in order to get working devices.

Mechanically, I suspect you'd have an easy time of connecting either type of motor. A housing/bracket for the motor, a coupling to the rod, even a simple piece of vinyl or rubber tubing, and you'd be ready to go.

I expect the difference between the price of parts required to create nine sets of drives and the price of nine factory-motorized blind sets would be substantial, in your favor.

As a DIY project, it also would provide you with a sense of accomplishment. What value can one place on that?

The engineering, trial/error, and raw labor of fabrication will be rather considerable, with a significant chance of breaking a few and not finishing... and the finished product won't be pretty.

Unless you have a prisoner's overabundance of time, I would consider the value of my time... and consider buying a different set of blinds that is already automated.

For one thing, such a set would probably be a significant upgrade from this tenant-grade cheapie.

Not the answer you're looking for? Browse other questions tagged electric-motor blinds or ask your own question.

5
Replace the Cord in Vertical Blinds
1
2-3kg blinds into drywall/plasterboard
1
Name of Part That Connects Blinds Wand With Blinds Roller and How to Replace It?
0
Sheer vs daylight blinds?
1
Persian blinds: why the headrail is open at the top
0
When I pull Tilt Chain, why don't my vertical blinds tilt?