Electric Lawnmower - Is The Problem With the Mower or the Extension Cord?

I have an electric lawnmower that's about 8 years old. I use a 100-foot extension cord with it that's probably 20 years old. While mowing the other day, I smelled a faint electrical smell. When I finished, I noticed that one of the holes on the end of the extension cord where it plugs into the mower was black and slightly melted (see photo). The corresponding prong on the mower was a bit blackened as well (see photo, though it's kind of hard to see). 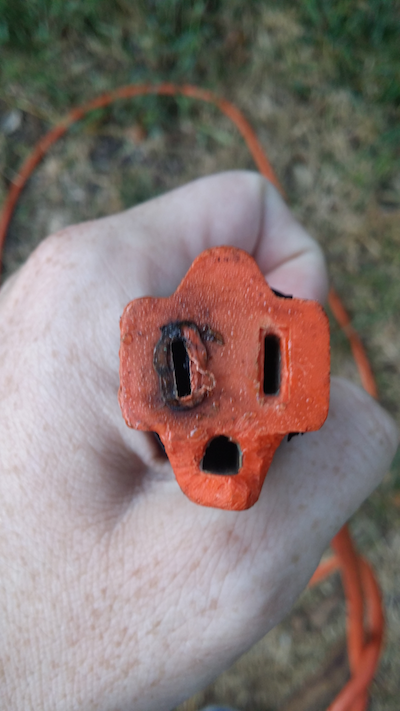 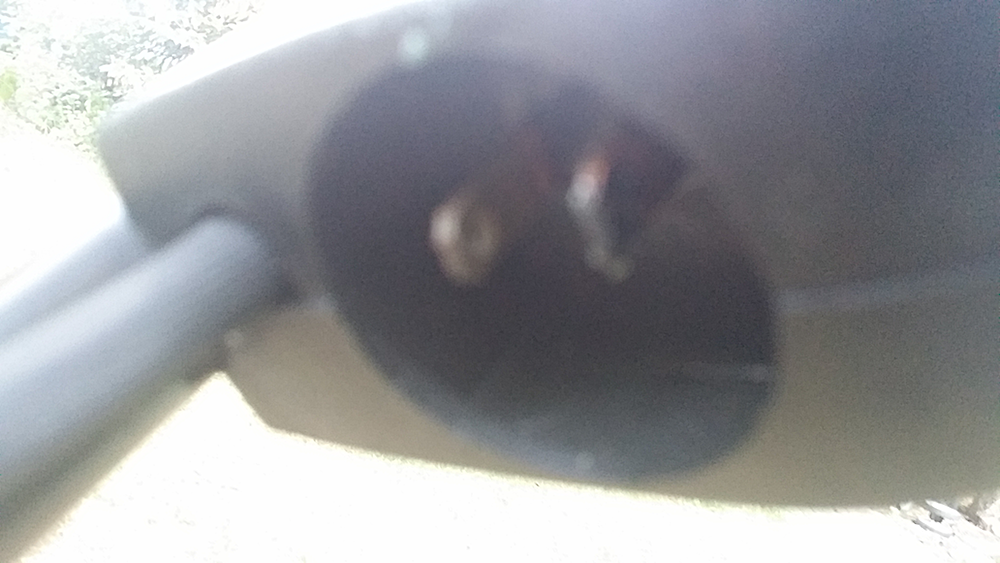 I assume that either the mower or the extension cord has a major problem. My main question is which one? Is there an easy way to tell? Is one inherently more likely than the other? Is there some kind of test I could run that wouldn't be dangerous to whatever else I was plugging in?

Obviously, I'd rather replace the extension cord than the mower, but I don't want to get a brand new extension cord and have that melt too, the first time I use it.

Thanks again for your help!

The connector is worn and/or damaged.

The best solution is to replace both connectors (male and female). This is easy for the extension cord but you may need to order a spare-part for the lawnmower connector.

As an alternative, You could probably hard-wire a line connector rated for outdoor use (wet conditions) but you'd need to open up the lawnmower connector and make modifications to remove the existing connector and provide strain relief for the new short cable to the line-connector.

Typical outdoor-rated unearthed line-connector for (double-insulated) lawnmowers etc used in the UK. There will be equivalents for US and other countries.

This is a design flaw in the mower -- the use of a chassis mounted inlet here does not provide effective strain relief for the connection, resulting in the extension cord working loose, arcing, and eventually burning as you see here. The better solution is to take out the chassis mount inlet and replace it with a plug attached to a short length of flexible cord and properly strain relieved both at the plug and where it enters the chassis (you'll need something like a 14/2 SOOW cord and a field-fitted NEMA 5-15P for this, as well as appropriate strain relief parts).

You can replace the end of the extension cord. The picture of the mower is blurry so it's hard to see the condition of the prong; you may be able to clean it up without having to do major surgery on the mower.

Once you get the electrical connection fixed, use a provision to secure the cord. If there is no cord lock on the mower, knot the cord to the handle so that there is a little slack on the connection, and any tugging on the cord won't affect the connection.

I find molded extension cords regularly fail at this location (the female end) , I replace the cord cap with a quality industrial end. I believe after years of use the molded ends get loose and start arcing damaging both the male and female connectors. I have found it more often on cords that are overloaded but have found the same problems on 12 gauge cords that really could not be overloaded because they had standard 15 amp connectors. And we're in use with only 1 tool connected. The female end failures are more common in my experiance. Since I really can't see the damage on the male end it may be possible to continue using the male if it is intact with no missing metal. The female loosens and causes the arcs where the males are usually 2 solid layers folded together so if the metal is ok clean it up put a new female end on the cord and get back to mowing.

Not the answer you're looking for? Browse other questions tagged electric-motor lawn-mower extension-cord or ask your own question.

1
is my lawnmower beyond redemption?
0
Is the recommendation for Gauge 14 cables with 13A devices overly conservative?
1
Lawn Mower (probably) Electrical Problem
1
What gauge extension cord should I use for dehumidifier in basement?
2
Difficult to start a four stroke mower when cold - how to diagnose the problem
0
Lawnmower stopped working after the outlet it was plugged into bent
16
I hit a pipe with a mower and now it won't turn
0
Repair a lawnmower engine that was left exposed to the elements for a year?
1
Why would a polarized plug not fit into a polarized extension cord?