What should I do about water dripping into my smoke detector from the attic after a heavy rain?

I live in the Midwest of the United States, and we not-too-rarely get a large amount of rain coming down at one time both in the spring and sometimes in the fall. Last night was no different (aside from random earthquakes..) than usual, but after I went to bed, my smoke alarm went off. I quickly determined that there was in fact no fire, so I went to take the smoke alarm off of its mounting and when I removed it, I found that there was a decent amount of water in the smoke detector. If I had to guess I'd say about 50 mL. So not a huge amount, but enough to set it off.

I left it off for a time, and did not notice any more water coming from the opening in the ceiling (which is a recess where the detector and power wiring sits, not fully open to the attic (just where the wires come in, as far as I know. I didn't examine it terribly closely), even though it was still raining fairly hard (though not nearly as hard as it had been).

This morning, I went to have a look around the attic to see if I could see anywhere it was leaking (it is still misting outside, but not raining any longer), but I was unable to detect any wet spots in the roof.

What should my next step be? The roof (and indeed the house) is 1 year old, so I would hope that it hasn't sprung a leak, but I can't think of how else water would have gotten into the smoke detector. I also suspect paying someone to go and try to find a leak is going to be fairly expensive as well.

The detector itself appears to be working. If I test it, and it functions, should I still replace it because of potential water damage?

Here is a picture of the socket in question, and there is indeed cool air coming from it. I'm not totally convinced it is just condensation, elsewise this would have happened last year during the winter, I would think, but am unsure. 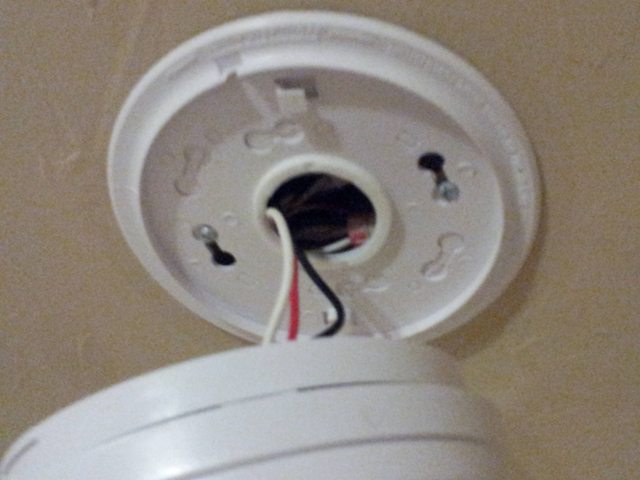 I left it off for a time, and did not notice any more water coming from the opening in the ceiling

I'll bet there's cold air from the attic coming through that hole, mixing with warm air in the living areas in your house and causing condensation to build up in the smoke detector.

You should seal that hole (a) to prevent cold air from moving down, and (b) to prevent any smoky air (should you be unfortunate enough to have any) from being pulled up through it (a process known as the Stack Effect , which can reduce the effectiveness of smoke detectors.

I have had a similar problem with two different detectors In fact it was enough to set them off.

I believe it is condensation forming in the conduit and going back into the box. Try insulating the conduit to prevent that from happening.

Not the answer you're looking for? Browse other questions tagged roof leak smoke-detectors or ask your own question.