Is it safe to hang a 39lb projector screen from a drywall ceiling without using the joists?

Is it safe to hang a 39lb projector screen from a drywall ceiling without using the joists? I'm having a debate with someone over how we should hang a projector from the ceiling. I want to place screws into the framing, however the joists are off center from the wall and would either require chains or that the projector screen just be off center. The person I'm debating with wants to use a steel toggle bolt anchor or some other method of hanging a heavy item in drywall without a joist.

40 pounds dangling from a toggle bolt going through 1/2 inch of drywall? I don't want to sit under it. Don't forget it's not just the toggle bolts, it's also the screws holding the drywall up, and they are not meant to hold anything heavier than drywall.

However, you don't need chains, and it doesn't need to be off-center.

Get yourself some steel angle with slots in them - look in the shelving section, not the raw materials section. Search for "slotted angle shelving" to get an idea of what you are looking for. Buy something long enough to span several of the ceiling joists, not just 2. They are available in a wide variety of sizes and finishes ranging from warehouse grey to polished chrome. 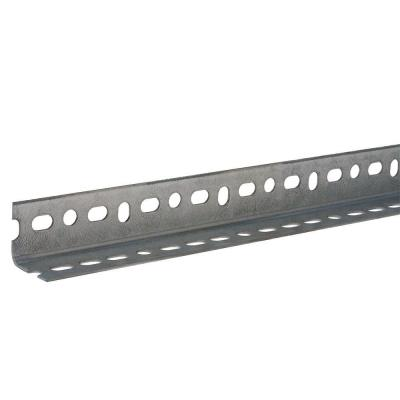 Attach 2 across the ceiling joists so that the projector can attach in the ideal position. With suitable anchors into the ceiling they should easily handle hundreds of pounds, assuming the ceiling is also strong enough.

Regarding the ceiling joists (studs are in walls) there are several possibilities:

First, the drywall will almost certainly sag over time and leave a permanent bulge. That's if (IF) the drywall doesn't pull off the screws holding it to the ceiling. That is the risk of this scenario--not simply the projector coming down.

Here's how it could play out: You hang the projector, and all seems well. Over time the natural vibration in the home causes the single drywall screw nearest the projector to work through the thin paper top layer of the drywall. Because drywall is flexible, the sheet starts to sag. Now the force is on more screws, but the initial damage is done. If there are only a few nearby screws, the same thing happens there. If you're lucky, this stops movement, but now your projector is hanging on an inverted drywall bubble, bouncing around with every step on the floor above. It's not a pretty situation.

Use a decorative board of some sort to span between joists, and mount the projector to that.

The short answer (with caveats) is yes, you can. If you are not able to reliably answer the below details I wouldn't recommend it.

The full details: Depending on how it's hung, read the specs of the anchors that you plan on using, there are definitely ones that will hold 39lbs in tension from a ceiling (a quick lookup had one with 50lbs, however I know some which do 100lbs+ per), but the assumptions are based on a standard, modern day construction.

To give example (again, packaging details will dictate actual requirements)

The closer your anchor is to the structure, the lower the requirements are.

Also, this assumes you're only using one anchor, while it's not a linear calculation, four of the above mentioned anchors would easily hold 100lbs. They will usually suggest a safety tolerance as well, so if it says 50lbs, it is generally suggested that the anchor can be used for a 25lb object.

This just seems like a really bad idea, honestly, no matter what the toggle bolts claim they can hold. It would be much better to span the joists with something and tie into that.

Let's be frank, I have a 40 lb dumbbell on the floor here, and I absolutely wouldn't want to hang that from a couple of toggle bolts in a 1/2" thick patty of paper-wrapped, compressed chalk powder and let anyone I care about sit under it.

Not the answer you're looking for? Browse other questions tagged ceiling framing mounting or ask your own question.

20
How much weight can I hang from a drywall ceiling?
5
Can I hang a hammock from basement joists?
0
How can I hang small weights from a drywall ceiling in a way that's minimally destructive?
3
How to hang a chair from the ceiling joists (with attic access)
2
Can we safely hang a ceiling fan from our vaulted livingroom ceiling?
6
What type of screws would work best for hanging a projector from the ceiling?
0
Hanging 10kg/22lbs pulldown projector screen from hollow plasterboard/drywall WITHOUT JOISTS
19
Hang indoor swing chair BETWEEN two ceiling joists
0
Hanging ceiling hooks from concrete beams above drywall ceiling