How do I anchor wall-mount hooks to studs if the mounting points need specific spacing?

I have two road bikes I want to mount on a basement wall. I have the mounting hook, which is something along these lines. Two screws (and whatever variety of plug/anchor), and the hook holds the bike from the top wheel. The bikes weigh about 19 and 27 pounds.

Space is limited, and because of that I want to mount the hooks as close to a corner as possible, and as close together as possible (so there's enough room for the handlebars in between. The ideal distance from the corner to the first hook is 10", and about 19" from that (29" from the corner) to the next hook. I don't have a stud finder (I can pick one up tomorrow though), but if they're 16" apart, clearly this won't line up.

I'm looking for any common techniques for scenarios like this - I assume mounting to the drywall is out of the question with that load (I've confirmed the drywall by drilling in a couple places, there's also 4" of insulation behind the drywall between studs). I also want to avoid destroying the wall with more than 4 holes if possible, it's a rented apartment.

The standard advice is to use the stud finder, mount the bike hooks on studs, and make do with a few lost inches. But if you must get those extra inches, you can mount a 2x4 on the wall horizontally, with at least each end anchored into a stud. And then you can install your bike hook on the 2x4.

You could get a couple Craftsman VersaTrack™ Vertical Bike Hooks (~$9.00/each). 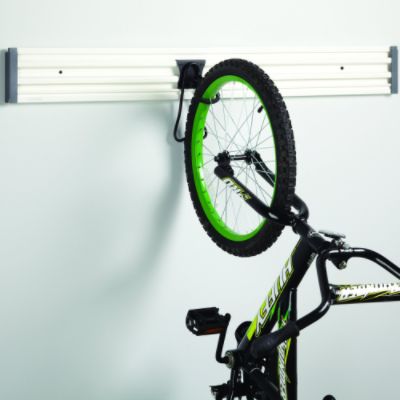 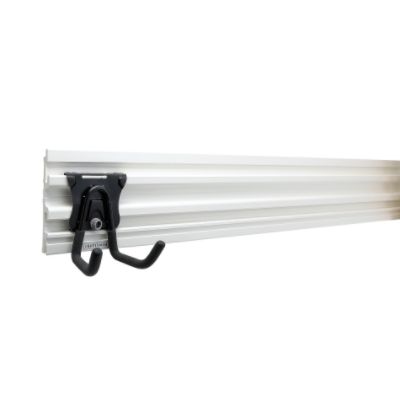 The VersaTrack™ piece is 4' long, so you shouldn't have a problem hitting a couple studs when hanging it. It would also allow you to easily adjust how far apart the bikes hang. You should be able to find other types of hangers for the system, so you could hang some of your other gear as well (helmet, gloves, etc.).

Not the answer you're looking for? Browse other questions tagged drywall-anchor or ask your own question.

15
How do I repair a curtain rod anchor that was ripped out of the wall?
7
How do I mount 20 lb speakers to drywall between studs?
0
Once I put in a screw with a dry wall anchor screw, can I remove the screw and replace the screw without ruining the anchor?
2
What to do if drywall anchor isn't flush with the wall
2
How to determine which kind of plastic anchor to use on which kind of wall?
4
How to anchor coat hooks and shelving in a rock-lath & plaster wall?
2
Mounting to hollow wall through slate tile
1
Transferring anchor locations from the wall to plywood
0
What are the best practice in drilling anchor screw holes in right locations?
0
How to build a strong wall surface against wall anchor?