My question is do I attempt to plane the middle of the stud down with a reciprocating saw or planer to try to fit a 30x80" door? Or do I just go with a 28x80""?

[Update] This picture was taken before the drywall was put up. Drywall is up and primed.

[update 2] used a magnet to find the screws and take em out. Then cut a wedge 32" and jammed it in the middle. I had to knock the top in a bit as it wasn't 32". Then I put in a buch of 2inch drywall screws all the way down on both sides and took out the wedge. Worked like a charm! warped the drywall slightly around the box as I didn't factor enough movement. will have to fan this out a bit or just leave it. Thanks for the tips guys! 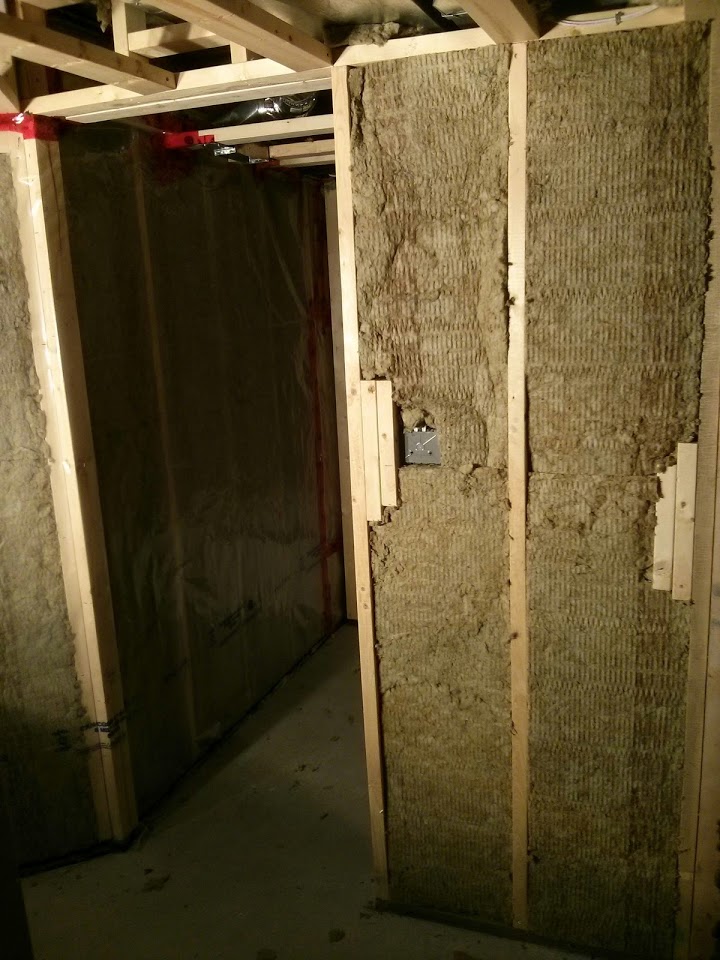 I can think of two potential fixes. In both cases, I wouldn't plane the stud at all, that compromises strength.

Door jambs are typically 5/8" or 11/16". In this case, I would just use a planer on the center of the jamb to shave it down to the 1/2" needed. There'd obviously be no shims in the center.

If your drywall is not yet finished, and you a certain that the stud was not bowed before, you can try forcing it to be straight.

Pull all the screws out of the bowed stud. Cut a 2x4 to exactly 32", then use a hammer to wedge it in horizontally in the center of the door, pushing the stud straight again.

Put several drywall screws back in place -- it's going to be the drywall that holds the stud from bowing again, so you need to make sure the connection is good.

I'm definitely hesitant to suggest this, since if it doesn't work you'll end up with the edge of the drywall ripped apart by the screws holding it in, and if it gives way at some point after the construction is done, then you'll have a stuck door to contend with as well. You'll have to use your judgement to see if this is an appropriate fix.

Wedge a 2x4, 32" long (if that is the exact number at the top/bottom of the opening) in the middle of the opening to push the offending stud back. (If this pushes the other post, then ignore all this advice.)

Now put blocking above and below the middle to hold everything in place. Use longish screws (3"+). This should tame the wayward stud for long enough to get drywall on.

Not the answer you're looking for? Browse other questions tagged basement door-frame or ask your own question.

1
How do I replace a storm door when I have a cracked door jamb?
4
What are some tips for fixing gaps between door and jamb in an exterior door?
4
Door sticking, frame no longer square, is this serious?
1
Does the rough opening for this door need to be reframed?
2
How do I keep the door jamb moulding from pulling away from the wall when hardware is screwed in?
2
Hanging a new shed door on a frame that is not level
3
How to properly frame/finish "trimless" interior doors?
1
How to repair bowed sliding door frame?
3
Can I remove prehung door from frame when installing?
12
How do I plumb a door that has spring-hinges?